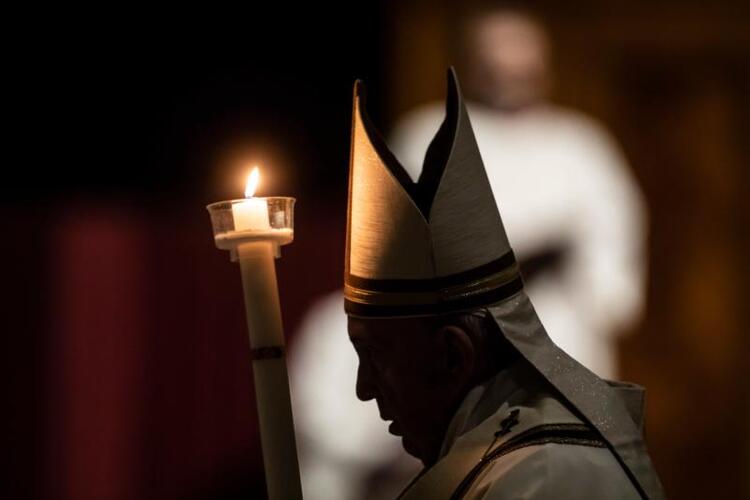 Pope Francis carries the Paschal Candle as he celebrates the Easter vigil in St. Peter's Basilica at the Vatican April 11, 2020. The Mass was celebrated without the presence of the public due to the coronavirus crisis. (CNS photo/Stefano Dal Pozzolo).

Pope Francis preached a Gospel of hope to a humanity living under fear of the coronavirus pandemic, two thirds of whom are under quarantine or restricted movement, as he commemorated the resurrection of Jesus at the Easter Vigil celebration in an empty St. Peter’s Basilica on April 11.

Pope Francis issued a strong appeal to Christians worldwide as the pandemic is confronted in 185 nations and territories: “Let us silence the cries of death! No more wars! May we stop the production and trade of weapons, since we need bread, not guns! Let abortion and the killing of innocent lives end! May the hearts of those who have enough be open to filling the empty hands of those who do not have the bare necessities.”

Never in living memory has a pope celebrated an Easter Vigil in this basilica the way Pope Francis did this Holy Saturday evening: in the presence of a congregation of just 30 people, including nine members of the Sistine Chapel Choir, some women religious and lay people, and one cardinal and one bishop.

Pope Francis: "May the hearts of those who have enough be open to filling the empty hands of those who do not have the bare necessities.”

After the reading from the Gospel according to St. Matthew, Pope Francis delivered an inspiring homily in which he likened the experience of the women in Jerusalem to that of people around the world today as they endure the Covid-19 epidemic. Just as on that first Sabbath after witnessing his death and burial, the women waited to visit his tomb, now the world waits in hope for a tomorrow when the coronavirus crisis ends and people everywhere can return to normal life.

“This year we are experiencing, more than ever, the great silence of Holy Saturday,” Francis said. “We can imagine ourselves in the position of the women on that day. They, like us, had before their eyes the drama of suffering, of an unexpected tragedy that happened all too suddenly. They had seen death and it weighed on their hearts.”

On that first Holy Saturday, he said, “pain was mixed with fear: would they suffer the same fate as the Master? Then too there was fear about the future and all that would need to be rebuilt. A painful memory, a hope cut short. For them, as for us, it was the darkest hour.”

Pope Francis: “This year we are experiencing, more than ever, the great silence of Holy Saturday.

“In this situation, the women did not allow themselves to be paralyzed. They did not give in to the gloom of sorrow and regret, they did not morosely close in on themselves, or flee from reality,” Francis said. “They were doing something simple yet extraordinary: preparing at home the spices to anoint the body of Jesus. They did not stop loving; in the darkness of their hearts, they lit a flame of mercy.”

Likewise, “Our Lady spent that Saturday, the day that would be dedicated to her, in prayer and hope. She responded to sorrow with trust in the Lord,” Francis said, “Without knowing it, these women were making preparations, in the darkness of that Sabbath, for ‘the dawn of the first day of the week,’ the day that would change history.”

He recalled that “Jesus, like a seed buried in the ground, was about to make new life blossom in the world; and these women, by prayer and love, were helping to make that hope flower.” Likewise, in today’s pandemic-haunted world, Francis said, “how many people, in these sad days, have done and are still doing what those women did, sowing seeds of hope! With small gestures of care, affection and prayer.”

Pope Francis told his global audience that because of the resurrection of Jesus, “tonight we acquire a fundamental right that can never be taken away from us: the right to hope."

Pope Francis began the ceremony in a darkened basilica by blessing the new fire at the Altar of the Confession (built by Bernini) in front of the high altar. Holding a lighted candle, he processed from there, accompanied by several clerics and his master of ceremonies, Msgr. Guido Marini, to the altar of the chair of St. Peter, where he has celebrated all the Holy Week liturgies and where stood two revered images—Our Lady Protectress of the Roman People, and the miraculous crucifix from the church of St. Marcello, each of which is linked to ending calamities in Rome in past centuries.

As he walked forward holding the lighted candle symbolizing the Risen Jesus, the lights of the basilica were turned on and the whole place was illuminated to celebrate the Resurrection. Then the deacon sang the Exultet, the song of praise to the Risen Christ. This was followed by readings from the Old Testament and the singing of the Gloria, accompanied by the ringing of bells to hail the Risen Lord. After the reading of the epistle, the deacon led the singing of the triple Alleluia (which is never sung during Lent), and the Sistine Chapel Choir responded.

For the first time during Francis’ pontificate there were no baptisms at the Easter Vigil because of the coronavirus pandemic, but the pope led those present and viewing online in renewing their baptismal vows.

During his homily, Francis recalled how on the dawn after the Sabbath, the women went to the tomb of Jesus and there an angel told them: “Do not be afraid. He is not here; for he has risen.” The women “hear the words of life even as they stand before a tomb... And then they meet Jesus, the giver of all hope, who confirms the message and says: ‘Do not be afraid’.”

He told his global audience that because of the resurrection of Jesus, “tonight we acquire a fundamental right that can never be taken away from us: the right to hope. It is a new and living hope that comes from God. It is not mere optimism; it is not a pat on the back or an empty word of encouragement. It is a gift from heaven, which we could not have earned on our own.”

Then, alluding to the song that Italians sang from their balconies at the start of the pandemic, “Tutto andrà bene!,” Francis recalled that “over these weeks, we have kept repeating, ‘All will be well,’ clinging to the beauty of our humanity and allowing words of encouragement to rise up from our hearts.” But he noted “as the days go by and fears grow, even the boldest hope can dissipate.”

Pope Francis concluded by urging people today “as pilgrims in search of hope” to be like the women after the resurrection and “cling to the feet of the Risen Jesus.”

For the first time during Francis’ pontificate there were no baptisms at the Easter Vigil because of the coronavirus pandemic, but the pope led the small congregation present and his global audience following on social media in renewing their baptismal vows.

Tomorrow morning, Pope Francis will celebrate Mass at this same altar and afterward, standing in front of the altar where he lit the paschal fire tonight, he will deliver his Easter message, “Urbi et Orbi,” to the city of Rome and the world.