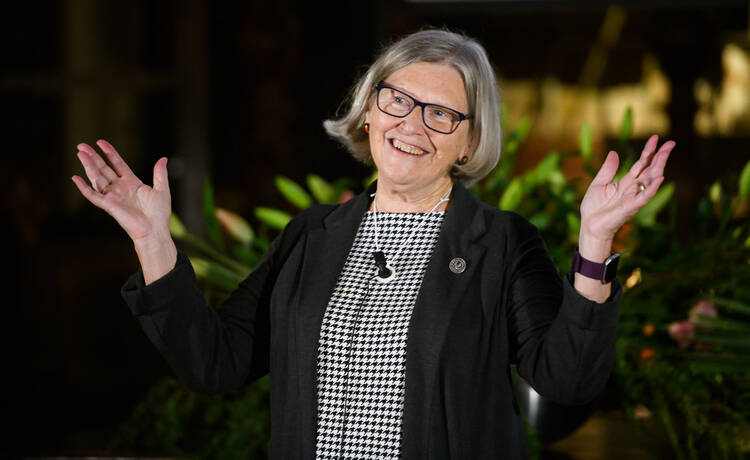 The voices of women are “critically needed” when decisions are made in the Catholic Church, said Simone Campbell, S.S.S., on Oct. 1 in Rome at a press conference sponsored by the Voices of Faith initiative. It is one of several reform groups seeking to bring attention to the fact that 185 men but no women are voting members of the Special Synod of Bishops on the Pan-Amazonian Region that begins on Oct. 6.

“Our voice and our vote are needed to speak out in this time of grave need,” said Sister Campbell, who is the executive director of NETWORK Lobby for Catholic Social Justice in Washington, D.C. “I’m here because my sisters are engaged in the Amazon, and they need to be engaged in this synod in a more vibrant, full and real way. This isn’t about power politics. This is about the body of Christ.”

On Oct. 3, at a Vatican press conference to introduce the synod, Cardinal Lorenzo Baldisseri, the general secretary of the Synod of Bishops, was asked why a lay religious brother has been granted voting rights at the synod but the same right has not been extended to any women. (There will be 20 religious sisters at the synod who have the same canonical status as the brother.)

“I’m here because my sisters are engaged in the Amazon, and they need to be engaged in this synod in a more vibrant, full and real way.”

Cardinal Baldisseri responded that it is a general rule of the Synod of Bishops that only clerics vote but that Pope Francis had decided to deviate from the norms in allowing one of the lay brothers to vote.

It is the third consecutive Synod of Bishops in which a religious brother is counted among the members and allowed to vote. What is unique about this year’s synod is that Miguel Angel González Antolín, F.S.F., a member of the Holy Family of Belley (France), is not the superior general of his religious order but the director of a school, Sagrada Familia de Ambato, in Ecuador.

The Voices of Faith initiative, which since 2014 has advocated for greater leadership roles for women in the Catholic Church, held an event on Oct. 3 at Biblioteca Vallicelliana in Rome to highlight the importance of having religious women present when decisions are made in the Catholic Church. (Disclosure: I spoke on a panel at a Voices of Faith event in 2018, and I am an occasional consultant for the group.)

“Both women and men are baptized to be Christ. We are all equal,” said Sister Fredell. “All of us are representing Christ to the same extent and with the same authority.”

This year’s event, titled “And You Sister, What Do You Say?” featured sisters and nuns from nine countries: Australia, Germany, India, the Philippines, Senegal, Spain, Sweden, Switzerland and the United States. A group of nuns from the Benedictine convent in Fahr, Switzerland, traveled to Rome by bus to participate. Over their black habits, they wore capes stitched with the phrase #VotesForCatholicWomen.

On the eve of the event, the Swiss Benedictines and other reform advocates gathered outside the entrance to the central office of the Synod of Bishops, near the Vatican, to pray and sing as the “Votes for Catholic Women” logo was projected onto the building.

Sounds like it is time for @Pontifex to meet with the sisters from Fahr Monastery #VotesForCatholicWomen@Synod_vapic.twitter.com/6DhFMhdc5T

At the event itself, some speakers called for more than voting rights for women at the synod.

Madeleine Fredell, O.P., a theologian and general secretary of the Swedish Justice and Peace Commission, said that the pulpit should be open to women, so they can deliver the homily at the Sunday Mass.

“Both women and men are baptized to be Christ. We are all equal,” said Sister Fredell. “All of us are representing Christ to the same extent and with the same authority.”

“We are living in a world threatened by the collapse of democratic systems, grave economic injustice and climate catastrophe,” she continued. “The church has something to say here, but I am convinced that it will only be trustworthy if its representatives are both women and men on all levels.”

Teresa Forcades, O.S.B., a theologian, physician and Benedictine from the Monastery of Sant Benet de Montserrat in Catalonia, recounted several great women whose memories are kept alive by the church.

She told the story of St. Gertrude of Helfta (1256-1302), who believed that God had granted her a sacramental power to forgive sins, even though the Third Lateran Council (1179) had prohibited what had been the practice of abbesses forgiving sins and giving penances to nuns in their communities.

What would married priests in the Amazon region mean for the church?
Inside the Vatican

Sister Forcades said it is “urgent” to change the church, which she described as a “patriarchal structure,” but also acknowledged “this very same institution has been able to preserve the memory, the works, the social initiative of the women of the past.”

To call for women to be able to vote at synods, said Sister Forcades, “is to call our church into responsibility, not to catch up with an outside society but to be coherent with its own history and with its own call to let the Holy Spirit be active among us.”

Bishop Felix Gmür of Basel, Switzerland, the president of the Swiss Bishops’ Conference, participated in a dialogue at the event. When asked about voting rights at the synod, he responded, “If a non-ordained man has the right to vote, then I don’t understand why a non-ordained woman cannot vote.”

The bishop later added, “We need an instrument to promote the presence of women in the church.”

More: Women in the Church / Women Religious / Synod on the Amazon

"How long O Lord?" Next year we commemorate 100 years since women were given the right to vote in our country. Yet, in our Church, we continue to be forced to be bystanders while we watch the main events from the sidelines. The frustration simmers to the point of exploding.

"How long O Lord?" For Cardinal Baldisseri to say that it is a general rule of the Synod that only clerics can vote, reminds me of the general rule of the Department of Justice that a sitting president cannot be indicted. All you have to do is change the rule! It isn't dogma, it isn't binding!

"How long O Lord?" The Swiss Bishop Feliz Gmur said, “We need an instrument to promote the presence of women in the church.” I say to the bishop, be the instrument! There will be more joy in heaven over one bishop who sees the light than over the 99 who refuse to acknowledge the other half of the human race.

My prayer insights lead me to believe that the Holy Spirit is calling upon women to save and heal our Church today in the opposite ways of centuries of instilled institutionalized patriarchy. This is the female vocation for the 21st century.

Right on Deb! but how long should women keep banging their heads against a closed door, instead of establishing their own church? We can have a Catholic Church without a medieval monarchy and princes---a 21st century church without the patriarchy.

I am totally appalled by this comment. What a sinister suggestion!

Heard, arthur mccaffrey, but oh, h no; #mychurchtoo. the male hierarchs do NOT get to exclude whomever they want. not what Christ Jesus did, He Who chose the Magdalene over Peter to be the Apostle to the Apostles at the tomb. Just nope.

Heard, arthur mccaffrey, but oh, h no; #mychurchtoo. the male hierarchs do NOT get to exclude whomever they want. not what Christ Jesus did, He Who chose the Magdalene over Peter to be the Apostle to the Apostles at the tomb. Just nope.

I hear you Deb!

To answer your question, until all Catholic women have all sacraments and opportunities open to them, starting with ordained women priests and including ordained female bishops and the creation of female cardinals and popes, will it be before women have begun to obtain justice in our church as Christ designed. Too many men and women in our church would push for women deacons and that is a mistake as it simply represents a different kind of oppression and not a better kind.

We must all demand our church put aside all misogyny and repent of it and we must fight against patriarchy now anyway we can. We can strike, as many women did in Germany last May, next May, we can hold back funds, especially for vocations and vocational training of priests until women are given the same opportunities to benefit from those funds. We can also annoy our pastors, bishops, cardinals and the pope with constants letters, protests and uncomfortable questions at every public moment. We must make this bias more uncomfortable for the hierarchy to keep than get rid of and that means constant efforts and the demand has to be for equal and same ordination and treatment as men and nothing less. We also need to refuse optional celibacy for all priests until women are being fully ordained priests. Otherwise, we end up with gender segregation and this would be far more crippling to the cause of women than not having married priests.

The all-male voting Synod is a sad reflection of two issues facing the the Church. First, all but one of the voting members are clerics. At a time when Pope Francis identified clericalism as a major problem, why does the Church continue the practice of only allowing the ordained to decide its direction. Second, despite the words that Pope Francis has said about the importance of women in the Church, when it comes to helping set its direction, they remain shut out of that process

Yes, 51% of the world's population needs to be integrated into all levels of the Mystical Body of Christ, from altars/pulpits to the top. Enough of a one lunged chicken wobbling around in circles for 1984 years (and yes that number IS poetically significant).

But please, not another level of second tier clerics, who happen to be women. ALL women; do not expect us to "settle for" vowed women religious as an appeasement.

And thank you Madeleine Fredell OP, we Dominican women DO preach, like it or not.

The Catholic Church fails to see that it excludes a differing, and likely useful, viewpoint when it excludes women from discussions and voting during synods. If men knew how to solve these problems by themselves, they would have done it by now. Even if women could offer only a partial solution, it would be worth taking the time to listen to women.

As a general rule, I have given up on listening to the church because it cannot find a way to speak with a living voice. It seems only to repeat the blather of dead church bureaucrats. Pope Francis is an exception.