What would married priests in the Amazon region mean for the church? 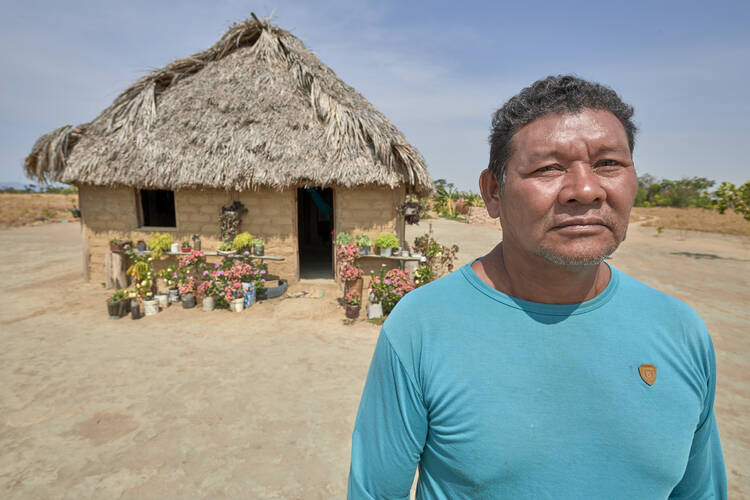 Norberto Cruz da Silva, a leader in the Wapishana indigenous village of Tabalascada in the Amazon region of Brazil, and also area coordinator of catechists in the Catholic Church, is pictured in an April 2, 2019, photo. While the upcoming Synod of Bishops on the Amazon aims to highlight the damage wrought by climate change and exploitation, the possibility of ordaining married men to minister in remote areas of the rainforest continues to garner more attention. (CNS photo/Paul Jeffrey)

This week on Inside the Vatican, Gerry and I talk about the U.S. bishops’ new resolutions on sexual abuse. How does the U.S.C.C.B. compare to other bishops’ conferences around the world?

Then, we take a look at a new document prepared for the synod on the Amazon region, which officially introduces the possibility of ordaining married men. What are its implications for the rest of the church? And what other topics addressed in the document should we be paying attention to?

More: Inside the Vatican / Synod on the Amazon

It would mean gender segregation and the further dehumanizing of all women in our church unless our pope were to immediately start ordaining married women to priesthood first.

It represents hate by sexism and depraved and grave abuse and sin by our hierarchy perpetrated upon the women of our church.

It will likely also cause greater abuse of both children and women in our church as that is what happens when men are given control over all women in religion in greater degrees. But don't worry folks those married priests will make sure to cover up their abuse even better than the celibate clergy did so we won't have to actually look at it and face what we have allowed. Well, that is for at least about 20 years or so until it is just so giganticly obvious we can't hide our faces from it again, you know, like now.

FACTS: Married men abuse children and women more than single or celibate men, and this is especially true when these men are given greater prestige, respect, position, control, or religious authority over women.

I think this is a bid to make Catholicism and the priesthood more attractive in a region where Protestant churches have been really successful at attracting former Catholics to their denominations. This idea of only allowing priests to marry in the Amazon shows the arbitrary decision-making of not letting women be priests, not letting all priests marry. You can't say on one hand it's all about priests being stand-ins for Jesus (celibate and male) while at the same time making expedient exceptions.

It would mean that the Eucharist is the sine qua non of our religion.

Will Nier
2 years 7 months ago

The Catholics there need the sacraments. The supply of priests in extremely low. Priests bring the sacraments to the people. Ordaining married men in that area who have a vocation would be the right thing to do. I would also think this is needed in Africa and some area's of the USA. However I still think the option of being married should be allowed for diocesan clergy. Not every one will opt for marriage as a priest but for those who do let's welcome them with open arms and then in a few years are gay clergy can marry. Will it water down the values and creed of our church. Not at all. It will enrich it seven fold.

The church has preached the idea that only priests can officiate over transubstantiation and that the host is essential. Another option besides allowing married priests is to acknowledge that laity can also celebrate and distribute the eucharist.

The Church has been trying to reach the indigenous populations of the Amazon Basin for centuries. There are even 2 encyclicals that lament the human rights violations of the people. The Amazon itself is a huge and difficult place for human habitation, distances are vast, and the constant rain and humidity are a challenge. Moreover, indigenous populations are highly dispersed and hard to reach. Ordaining married men as priests is a prudent accommodation in order to bring the message of Christ to the people living in this environment. The number ordained is not likely to be high.