The radical Benedictine sister who fought for Catalan independence 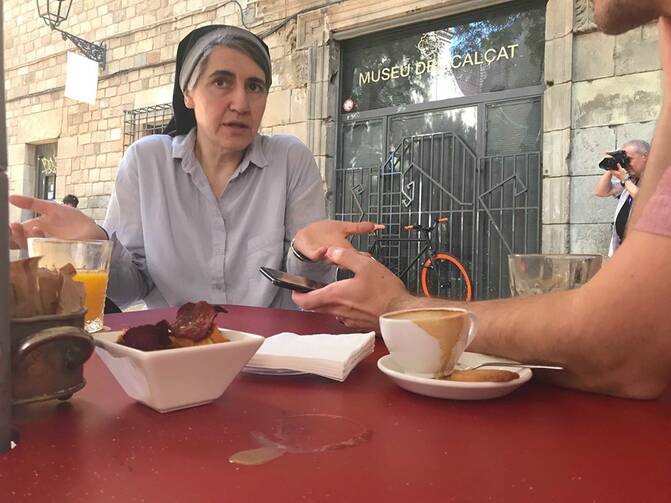 A guitar busker’s soft notes fill the air of Barcelona’s Plaça de Sant Felip Neri, a small square in the city’s historic Gothic Quarter. Hundreds of small yellow flowers cascade from a tall tree that provides ample shade, a haunting contrast to the Church of St. Philip Neri that flanks one side of the square, still riddled with divots dug out of the church walls by bombs dropped by the forces of Francisco Franco during Spain’s brutal civil war.

As tour groups traipse through the square in 2019, it is difficult to imagine the scenes of independence activists flooding the streets of Barcelona in the fall of 2017 and the widely publicized repression by Spanish police, who seized ballots and voting boxes, fired rubber bullets and beat demonstrators with batons, leaving almost 1,000 reported injuries. The demonstrations followed a referendum on independence called by the semi-autonomous government of Catalonia.

The vote had been pre-emptively ruled illegal by the Constitutional Court of Spain, and the decision to conduct it anyhow led to the arrest or exile of several prominent Catalan politicians, including former President of Catalonia Carles Puigdemont, who escaped abroad and remains in exile. A United Nations report concluded that some of those politicians can rightly be called “political prisoners.”

The tumult in Catalonia continues, with uncertainty persisting through the recent elections throughout the European Union. Many Catalans wonder what the future holds for their community. Among them is a rabble-rousing Benedictine nun, Sister Teresa Forcades, one of the most recognizable voices within Catalonia’s independence movement. In 2015, Sister Forcades received permission from her community to be exclaustrated for a period of three years in order to participate more fully in the political process. Now, back in the mountain monastery at Montserrat, Sister Forcades continues to observe the events that unfold.

The tumult in Catalonia continues. Many Catalans wonder what the future holds for their community.

“It would make sense that the European Union would back a referendum, or the U.N. and other democracies. To say, ‘Listen, you don’t need to be firing bullets to solve political problems; just vote! See what happens,’” Sister Forcades says.

“Spain could even come up with some alluring, interesting proposal. Knowing the Catalans as very negotiating, we might say, ‘Okay, let’s work out a deal.’ It’s not that difficult to respond politically, but unfortunately it hasn’t been like that. There’s been a hardening of ideological confrontation,” she says.

It is a disheartening situation for Sister Forcades. In 2013, she and the economist Arcadi Oliveres launched a manifesto that co-founded a movement known as Procés Constituent, aiming to push the independence conversation to the left—the independence movement remains primarily a phenomenon of the center-left—while creating spaces for citizens to speak publicly about what exactly they might want in a newly independent Catalonia.

The manifesto called for a grass-roots mobilization that could prepare the country for a Constituent Assembly—that is, a process where Catalans could rewrite their constitution. Though the manifesto underlined the need for open conversations, it also offered a platform of basic political measures, including “decent housing for everyone,” “expropriation of private banks,” “abolition of current immigration laws” and “a Catalonia outside NATO.” Thousands of Catalans signed the manifesto within the first week of its release, and scores of local assemblies inspired by its vision were set up across the region.

In addition to its commitment to participatory democracy, Procés Constituent has been defined by an opposition to capitalism, a position not shared by all independence advocates. Sister Forcades herself identifies as a socialist, and while the sight of a socialist sister in a Benedictine habit might be jarring for some, she says the combination is not just natural, but necessary. It has earned her a place in the public discourse as a fresh Christian voice in secular politics, a notable achievement in a part of the world where the Catholic Church was closely tied to a repressive political regime for decades.

Although she was baptized as a child, her Catalan family was not devout. They lived at that time under the dictatorship of Francisco Franco, where even speaking the Catalan language in public was forbidden. In her teens, however, she read the Gospels for the first time, and they had a profound impact.

“You don’t get millions of people in the street for seven or eight consecutive years in many other places. I don’t think you can put the people back in their homes.”

Sister Forcades soon found herself in a parish where a local Jesuit priest was a member of a group known as Christians for Socialism, and her path was set. Connecting Christianity and socialism “is not something I came up with originally,” she says, “but was there from the beginning of my Christianization and my socialization within the church.”

“For me, that’s not a difficult association. What’s difficult is to disentangle [Christianity and socialism],” Sister Forcades says. “What I don’t understand is how you could be Christian and not care for the victims of history. That’s what socialism is supposed to be about, to say we want to change the world, the social order, because the social order is based on privilege. It’s about upheaval.”

She says the anti-capitalist ideas in the Procés Constituent platform, though radical, have been well-received in debates and among the general public. Social upheaval is hard to come by, however, and after her three years of dedicated political work, Sister Forcades admits she has become somewhat disillusioned by the process.

“My experience was not very positive on the whole, especially because of my naïveté,” she says. The initial grassroots response to the manifesto was rapid, authentic and enthusiastic, something that turned out to be an exception in the region’s established politics. “I had no clue how party politics functioned. I don’t know what I assumed, but maybe I thought that it was like life in the monastery. It’s not.”

Sister Forcades had been prepared to run in parliamentary elections during her exclaustration, but after trying to work in a coalition of many other partners, she concluded that established politicians were not interested in, or ready for, the deep, horizontal kind of change she and others were cultivating through Procés Constituent. In the end, she did not run, saying her goal was not to win a seat but to create an open “debate about the rules of the game.”

She does not regret her experience, however. She says it provided a lot of positive lessons. For now, she, like others across Catalonia, is waiting to see what comes next, as detained Catalan politicians await a verdict in the fall after the conclusion in June of a lengthy trial in the Spanish Supreme Court—and as the year ticks closer to Sept. 11, the national feast day of Catalonia, when independence sentiments often are reignited.

“It’s not over, and I hope [the independence movement] will move forward, but I don’t know at what pace or on what terms,” says Sister Forcades. “What’s happening in this little corner of the world is amazing,” she adds. “You don’t get millions of people in the street for seven or eight consecutive years in many other places. I don’t think you can put the people back in their homes.”

According to the government of Catalonia, despite threats and police presence, just over 40 percent of registered voters turned out for the 2017 referendum vote, with 90 percent voting in favor of independence, up from 80 percent who supported it in a similar referendum in 2014. Though high, that level of support for independence is not necessarily reflective of the Catalan population as a whole, given the significant abstention rate.

A recent poll by Spain’s Centre for Sociological Studies showed a divided constituency, with 47.2 percent of Catalans favoring independence and 48.6 percent rejecting it, with a margin of error of 3.1 points. Without a legal referendum, however, it is difficult to ascertain a full picture.

“One important thing is young people,” Sister Forcades says. “All this movement, especially around the political prisoners—the injustice is so flagrant—and young people seem to be more skewed toward independence and wanting a radical change.

“If that’s the case, then in a few years these [poll and referendum] numbers that are sometimes around 50 percent might become bigger, and then this will need a democratic solution. If you have less than half the population wanting independence, you have a problem that’s difficult to solve, but we want to know whether we are half or not. That’s what [the Spanish government] won’t allow.”

As for returning to more direct participation in Catalonia’s political process herself, Sister Forcades says, “I am open, as I was before,” although she has no concrete plans to do so. For now, she is happy to be back home with her community in the monastery, following a pattern of life she says she missed during three years pursuing a Catalan independence that remains, for now, just out of reach.

I'd like to know a little more about the reasons for Catalan independence. While I agree with Sister Forcades left-of-center politics, it wasn't obvious that independence is a good thing. There are plenty of independence movements in recent history that, if successful, would have a negative effect on minorities and the environment.

Someone should point out to the good sister that socialism led to 140 million dead in the 20th century. It is a system that cannot work because it is against human nature given to us by God. Because it cannot work, it always leads to strong armed rulers who impose their will. It sounds good to people except it suppresses initiative and then kills in large numbers when people revolt. We have living examples, the most current one is Venezuela.

An aside: my wife and I were in Barcelona for the big rally in October 2017. We watched a million people lined up on the Passeig de Gràcia shouting “Libertat”

Does sister realize she is both a nationalist and a socialist or a national socialist?

Unfortunate article. Full of clichés, lies and half-truths. And what a pity that christian journalism legitimizes a xenophobic and supremacist movement that promotes the independence of the rich from the poor. Is @americamag now defending new borders?

OK, enlighten us here in Australia.
I see this through the lens of Brexit, Northern Ireland, Eire and the abominable one-world tyranny of the "European Union".
Is Spain in Europe? Yes.
Is Spain a patchwork of ethnic groups? Yes.
Are the Basques happy with that? Heard of ETA?
What grounds do they have? Multiple from their point of view it seems.

What reasons do the Catalans have to either separate or remain in Spain outside of EU or remain in Spain within the EU?
And finally, what is a nun doing preaching and plotting revolution?
If John Paul 2 was still in office, would she get curry!