The Catholic Church must listen to the courageous voices of women 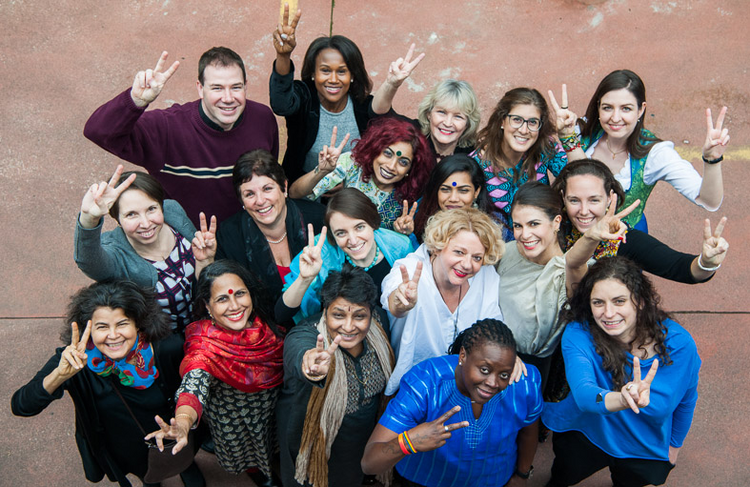 My first encounter with the Voices of Faith event happened on International Women’s Day in 2015. From my desk, I watched the live stream of the event that took place inside the Vatican and featured the stories of Catholic women working on the frontiers of the church in areas like education and health care for girls and women as well as initiatives that supported migrants, refugees and victims of human trafficking. The event featured a panel in which five accomplished women raised critical questions and spoke about their hopes and dreams for the leadership of women inside the Catholic Church.

I immediately felt inspired and encouraged by this creative and unique initiative, which sought to be a place of encounter and a bridge between the frontiers and the central government of the church. The participants highlighted the leadership of women already being exercised in the church but also insisted that this leadership be expanded to every area of the church’s life. Already in 2013, Kerry Robinson wrote in Americaabout the group’s meetings with cardinals in Rome to discuss opportunities “to elevate women to positions of meaningful leadership in the Roman Curia.”

Friendship and regular collaboration with women is essential for any man preparing for priestly ministry.

This year, the fifth year of the Voices of Faith event, I had the privilege of speaking on the panel at the event. In light of the upcoming synod on young people in October, the event mainly featured the voices of young women. One of the inspirations guiding Voices of Faith this year was a letter Pope Francis wrote to young people in preparation for the synod. “Do not be afraid to listen to the Spirit who proposes bold choices,” he said. “The Church wishes to listen to your voice, your sensitivities and your faith; even your doubts and your criticism.”

It is providential that this year’s event took place in the Aula of the Jesuit Curia in Rome, where the Jesuits meet for general congregations to elect a new superior general and discuss important business. In this same hall in 1995, the Jesuits issued a major statement on women in church and civil society in which we heard a call “to change our attitudes and work for a change of structures” in regard to “respect, mutuality and equality between men and women” and to “translate theory into practice not only outside, but also within, the Church itself.” Asking for the grace of conversion, all Jesuits were invited to “listen carefully and courageously to the experience of women” and to “align themselves in solidarity with women.”

The women who spoke at this year’s event are exemplars of faith and courage.

On the panel at Voices of Faith, I spoke about the strong presence and influence of women throughout my Jesuit formation. I have had women as professors of Scripture, ethics, sacraments and even homiletics. I learned Ignatian discernment from a Dominican sister who was my spiritual director for three years. I prepared for priestly ministry with women: studying with them and collaborating with them. Women have been my supervisors, colleagues and friends. Along the way, I have tried to listen and learn from these women, especially as they shared their diverse experiences as Catholic women and raised critical questions about the church we love. On the panel, I emphasized that this friendship and regular collaboration with women is essential for any man preparing for priestly ministry.

In response to other questions, I spoke about my hopes for the Papal Commission on the Diaconate of Women and of the joy and pain of women who experience a call from God to serve within the Catholic Church as ordained ministers but live with the reality that it is not possible to fulfill that vocation today.

The women who spoke at this year’s event are exemplars of faith and courage in their work with refugee women, girls education and Catholic-Jewish relations. As just one example of many, Ssenfuka Joanita Warry, a Catholic, spoke powerfully about the double discrimination she faces as a woman and a lesbian in Uganda. She described the violence that results from the criminalization of homosexuality. Her dear friend, she said, “paid the ultimate price” after a local newspaper published names and photos of L.G.B.T. persons. She asked why homosexuality is still criminalized in parts of the Catholic world. Since messages from the churches in Uganda are treated as messages from God, she explained, “our religious leaders hold the key to protection of L.G.B.T. persons.”

The courage of these women gives me courage. There were many powerful moments of honesty. At some points, I saw people in tears because of the beauty and power of what was shared. In response to the final question of the panel, “Why are you still Catholic?” Elisa Orbananos Hernando, who works for the Jesuit Refugee Service in the Great Lakes region of Africa, said, “I’m still in love.... I love the church that made me the person I am today, and I try to love in return.”

I hope the event has a ripple effect that inspires and encourages more women to speak about their experience of how God is at work in their lives and in the church—a church that needs every voice.

Luke Hansen, S.J., is a student at the Pontifical Gregorian University in Rome and a former associate editor of America. A version of this essay was originally published by the German Jesuits.

Thank you and God bless you, Luke. Your presence at the conference, your words, your listening ears, and your respect for your women teachers, colleagues, and friends, and your willingness to speak are more encouraging than you know.

When I learned about this conference I looked forward to watching/listening from afar, on You Tube, and was not disappointed -- the speakers were courageous and challenging. But it was discouraging to feel that the Vatican had deliberately turned its collective back, that Pope Francis did not attend, and when I saw no coverage whatsoever in America Magazine, it was exceptionally discouraging. Thank you for proving that at someone is listening and would like others to listen as well. I would still like to see more and fuller coverage in America!

It was a very good meeting. Congratulations to Voices of the Faith and all the participants. However, the ordination of women to the priesthood and the episcopate is the fundamental issue, and I am not sure that skirting this basic issue of theological anthropology is the way to go. The history of religious misogyny is well documented. See this, for example:

There is no denying the historical evidence. There is no denying that patriarchal gender ideology is incompatible with the truth revealed in Christ Jesus. Sooner or later, the church will have to face the music. Why keep playing games? Why prolong the agony? I know, old habits die hard. We better get on our knees, because the entire body of Christ is suffering and only the power of the Holy Spirit can enable the church to overcome 3000 years of religious patriarchy.

Thank you for this article! The church does need every voice. Women see and understand the world somewhat differently than men, so women may see a solution to problems when men do not. It is hard to see the church move so slowly, but at least it is moving, now that we have Pope Francis.

Oh my goodness. Nothing negative to report e.g. when Mary McAleese said the Church that is anti-abortion is not the Church of the future? Was that a "shared moment" of "beauty and power?". If that's your Church I want no part of it. Stand for the hard truths of the faith. Jesus' truth is more important than emotionalism.

It's a wonder that the Church has kept women out of the priesthood for so long. The best way to eliminate patriarchy is to feminize the men, and the priesthood has never been as feminized as it is now. I suppose the thing holding the women back now is the fact that the feminized priests are mostly homosexuals, who enjoy their power and special club.

“Why are you still Catholic?” Elisa Orbananos Hernando, who works for the Jesuit Refugee Service in the Great Lakes region of Africa, said, “I’m still in love..."

These sound like the words of an abused woman making excuses for remaining with her abuser. The clerics booted these well-meaning women out of the Vatican, but the Jesuits brought them a bouquet of flowers to make them feel better, so they stay. Where have we heard this story before?

Jeannette, I have certainly had that same thought, and your point of view may be valid for some. My current point of view, which appears to be shared by many of these women including the formidable Dr. President Mary McAleese, who is nobody’s victim, is that this Church belongs to us, it is our spiritual home, as we are here as of right, so why should we leave? Let the abusers be the ones to leave or change their ways. Maybe we are dreaming the impossible dream, but on the other hand, this is a moment of great change for women in the world ... why give up now?

Caterina,
The clerics aren't leaving nor are they changing. At a certain point, our God-given dignity requires us to remove ourselves from toxic and dysfunctional environments. The abused woman can stay in the house because it belongs to her too, or she can get out when it's obvious that her self respect, and maybe even her life depend on her leaving it.

Yes, as baptized Catholics why should WE leave? Let us raise our voices to expose the abusers! Let us speak up, speak up, and never stop speaking up. There will be a tipping point. While we speak up, we must engage with others who are fighting against discrimination in the church. We must practice self-care. We will never be apologists for the evils of discrimination against LGBTQ people, women, or anyone else. We will speak out for the victims of sexual abuse. We will uncover the ugly underbelly of the church, and demand change. We will not succumb to the bully bishops who try to use "the letter of the law" to silence us and/or to cover up crimes.

Yes they must listen to women, they must get out into the community and listen to all voices not just the dominating voice that is deeply embedded in the Church.

Yes they must listen to women, they must get out into the community and listen to all voices not just the dominating voice that is deeply embedded in the Church.

Of course, when America and the Jesuits say that the Church must listen to the voices of women they mean only those women who hold to a leftist point-of-view. Women who support the Magisterium of the Church are never listened to. Women who embrace the entire seamless garment (which precludes ones from being pro-choice) are ostracized. Women who think that it is more important to speak out about genital mutilation, child brides and honor killings than it is to advocate for women priests are not wanted.