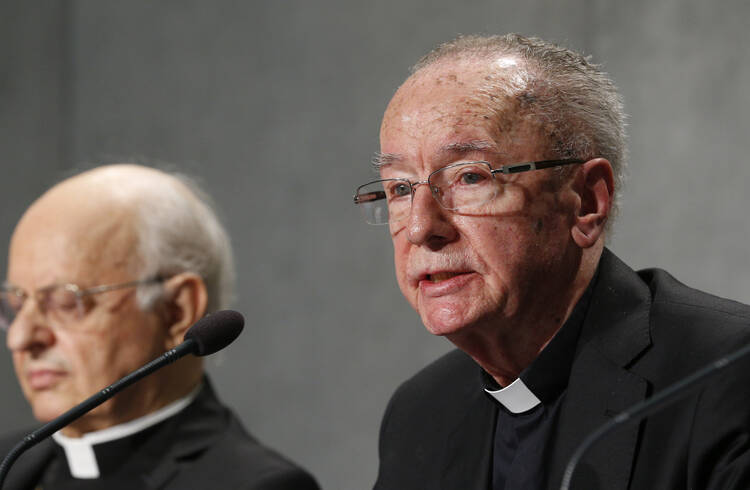 Brazil’s Cardinal Claudio Hummes gently but firmly dismissed the harsh criticism by a vocal minority of people, including some cardinals and bishops, of the working document for the Synod of Bishops for the Pan-Amazonian region that opens next Sunday, Oct. 6.

The cardinal will play a central role in the upcoming synod as relator general (chief rapporteur), a responsibility he was given by Pope Francis. He understands the problems of the region because of his work as the president of the Pan-Amazonian Ecclesial Network (Repam), which extends over nine countries in the region. He participated in the Vatican press conference on Oct. 3 with Cardinal Lorenzo Baldisseri, the secretary general of the Synod of Bishops.

At the press conference, one reporter noted that the synod’s working document had been harshly criticized by some cardinals, including Germany’s Cardinal Walter Brandmüller, and bishops, some of whom accused it of containing heresy. Cardinal Hummes explained to the questioner and the would-be critics that the working document “is a text for the synod, not of the synod” and is the result of the bishops following the synodal path of “listening seriously” to 80,000 indigenous people and others in the region over the past two years and synthesizing what they heard in a document.

“It is the voice of the local church, the voice of the church in the Amazon—of the church, of the people, of the history and of the very earth, the voice of the earth.... And this has value, it is not fake news,” he said. “The church didn’t do it for the sake of doing it to only ignore them,” the Brazilian cardinal remarked. “No! If it was done, it was so that [the church] could listen to them. This is the synodal path: to seriously listen.”

The same reporter noted that the synod document raised the possibility of ordaining married men for communities that do not have the Eucharist on a regular basis and said this has been criticized for calling into question the tradition of celibacy in the church. Cardinal Hummes again responded calmly, saying this is one of the suggestions that came from listening to thousands of people, “and it will be taken for discussion within the synod assembly.”

It was a message for the critics who are not many in number but have platforms from which they can broadcast their views. In June, Cardinal Brandmüller published an essay in which he described the synod’s working document as being heretical because it refers to the rainforest as a place of divine revelation.

He also criticized the synod for its plans to get involved in social and environmental affairs. U.S. Cardinal Raymond L. Burke and Auxiliary Bishop Athanasius Schneider of Astana, Kazakhstan, launched similar critiques in an eight-page letter released on Sept. 12, in which they cited “serious theological errors and heresies” in the synod’s working document. All three men also expressed concerns about the texts of the Synod on the Family and especially its concluding document, “Amoris Laetitia.”

Cardinal Baldisseri noted that there are critics of the document but suggested that they should not hasten to judge it without understanding its nature. “It is not a pontifical document,” he said. “It’s a collection of the input from the grassroots of the Amazonian people and the result of what they said in 170 assemblies and in other forums.” He explained that the bishops listened to the people and then drafted the text. “It’s necessary to listen, not to judge,” he said.

He added that “if there is a cardinal or a bishop who does not agree, who sees that there is content that does not correspond to church teaching,” they should understand that “it’s not a magisterial document. It’s a working document that serves as a basis to construct from zero the final document. It’s known as a martyred document.”

In the Amazon, Pope Francis is setting the agenda for a new kind of synod
Luke Hansen

“In the church today, more than in the past, there’s freedom of expression,” he said, and people who express criticisms “have to respond to their own conscience and finally to God for what they say.”

Responding to a question about criticism of the synod made by some members of the Brazilian government for infringing on the sovereignty of the country, Cardinal Hummes acknowledged that some had spoken in this way but said this criticism has been toned down now thanks to dialogue between the bishops and government ministers. He recalled that the church has worked in the Amazon for four centuries “and does not come from the outside; we have a real experience of the Amazon region and its needs.”

In addition, he said, Brazilian bishops see the country’s sovereignty as “untouchable.” But that does not exclude the fact that the rest of the world can have something to say to the country.

One reporter noted that the working document emphasizes the contribution women make to the church in the Amazon and the need to recognize this more fully. Cardinal Hummes responded that “we are so grateful [for] their extraordinary work” and highlighted that in many places they are the ones who keep the communities alive.

“They ask that this work is in some way institutionalized, so that they may have more authority when they carry it out,” he said, calling it a necessary step.

Wonderful text. For an outsider, the synod might raise concerns of an Ideological colonization. It’s understandable. But as a Brazilian, I am convinced that the Amazon without the Church "c'est de la barbarie". No other organization works as much to protect the Amazon’s indigenous people from irresponsible government policies, lack of social welfare, and violence mainly from criminal gangs behind deforestation. Quoting Fr. Thomas Reese S.J. , “I am not optimistic about the future, but for the first time in a long time, I am proud of my church for being on the right side of history.”

"It was a message for the critics which are not many in number......" Oh really? On what evidence do you base your assertion? I would not purport to know how many "critics" there are, but I have confidence that as long as there are those devoted to truth, there will be opposition to the agenda of the present pontificate. Sadly, such opposition must also extend to the Jesuits, who seem to support the synod's heresies and others