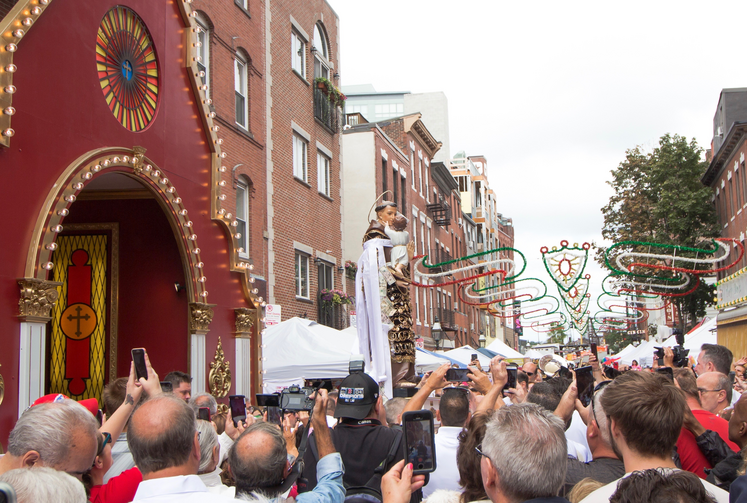 As the clock approached noon on Sunday, Aug. 25, a dozen men prepared to carry a statue of St. Anthony of Padua through the narrow streets of Boston’s North End, thronged with people from around the world. The crowd had been singing “Happy Birthday” to Anthony but now quieted down. The men paused as they brought the saint out of the outdoor shrine. Two sets of cannons shot red, white and green confetti into the air. Marching bands played, and the crowd cheered for the statue of the 13th-century friar holding the child Jesus.

This was the culmination of the 100th Saint Anthony’s Feast in Boston. The annual weekend-long spectacle began in 1919 with Italian immigrants from the small village of Montefalcione in Avellino. Organizers say it is the largest Italian religious festival in New England.

“We do the procession at the exact same time as they do in the old village,” said Michael A. Bosco, a member of the Society of San Antonio di Padova da Montefalcione, the lay group that organizes the festival. “We bring St. Anthony out at 12 p.m., and they bring him out at 6 p.m.,” he said.

As the procession began, several women unfurled long white ribbons that were tied around the statue. People in the crowd reached out with cash in hand, and the women swiftly traded the money for a saint pin and a quick Buona festa! (“Happy feast!”) before affixing the bills to the white ribbons. As the statue made its 10-hour procession through the neighborhood, St. Anthony amassed a fortune of pious donations and prayer cards. By the end, practically all that remained visible of the statue was the saint’s tonsured head.

The annual weekend-long spectacle began in 1919. Organizers say it is the largest Italian religious festival in New England.

Mr. Bosco said the city estimates that about 250,000 people attend the festival each year. For some, the main attraction is the street food, including cannoli and arancini, Italian-style fried rice balls. But Mr. Bosco assured me, “You can see the devotion, you can tell who’s really here for St. Anthony.” Members of the society keep an overnight vigil at the outdoor shrine during the whole weekend. Some visitors want to avoid the large crowds and instead pray to the patron saint of lost things in the wee hours of the morning.

Carmelina Caso and her husband, Leo, made a special trip to Boston for this year’s festivities. Originally from Molise, in southern Italy, they now live in Montreal. For Ms. Caso, the trip to Boston was about celebrating both culture and spirituality.

“I remember, growing up, our parents would dress us up in brown robes with white cords around the waist, just like the saint,” Ms. Caso recalled. “For me, coming here feels like home.” While the couple’s hometown hosts a small celebration for the saint, Ms. Caso said she was attracted to the Boston festival because of the opportunity to pray to St. Anthony with so many other people.

One special aspect that Ms. Caso and other visitors were able to enjoy this year was the physical presence of the saint, in the form of two relics on loan from the Basilica of Saint Anthony in Padua, Italy. Outside a small, unassuming brick building near the outdoor shrine, a line spilled into the street with visitors waiting to venerate small pieces of flesh and bone taken from the saint’s tomb. Inside, a gold bust of the saint stood next to the relics, and people knelt, touched and kissed the holy items.

Michael Bonetti, the 23-year-old society member responsible for the presence of these relics, said that it took almost a year to arrange for them to be brought over, with a Franciscan friar from Padua delivering them in person.

“The people here, we celebrate St. Anthony in August as a living person in our lives.”

“We want people to touch them,” said Tom Muscatello, the North American liaison for the basilica. “These relics were venerated by Pope Francis, Mother Teresa and Sister Lúcia of Fátima.” Next to the statue were cards on which people could write their prayer intentions, and Mr. Muscatello assured people they would be hand-delivered to St. Anthony’s tomb in Padua.

Underneath the ribbons of cash, the North End’s own statue of St. Anthony wears a robe with hundreds of gold coins, rings, necklaces and other precious offerings that date as far back as 1919. “When my brother tragically passed away, our mother gave her wedding ring to St. Anthony,” Mr. Bosco said.

New England’s Italian-American community is no longer concentrated in the North End, and gone are the days when neighborhood residents like Mr. Bosco’s grandmother would hold “open houses” during the feast. Yet the Saint Anthony Society continues to grow.

Mr. Bonetti, decades younger than many of the other members of the Saint Anthony Society, has already assumed an important role because of his deep faith. “St. Anthony is a part of my family,” he said.

Mr. Bonetti said that while the rest of the church officially celebrates St. Anthony’s death on his feast day in June, “the people here, we celebrate St. Anthony in August as a living person in our lives.”

“I know technically St. Patrick is the patron saint of Boston,” Mr. Bosco added, “but St. Anthony is our patron here in the North End.”

Thank you for the article and documenting this heritage, before the next bishop has a chance to "renew" the parish by abolishing it.

Angelo Jesus Canta is a graduate student at the Boston College School of Theology and Ministry, specializing in liturgical studies and Filipino theology. He is a former Joseph A. O’Hare, S.J., Fellow at America Media.