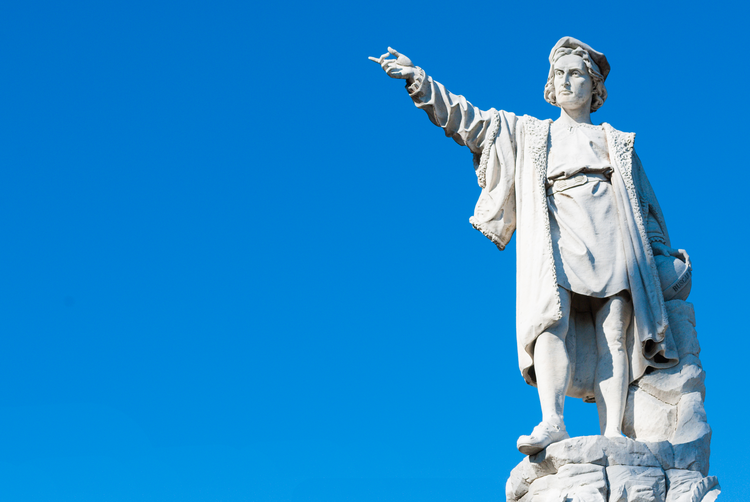 Next Monday many in our nation will celebrate the achievements of Christopher Columbus, but the citizens of our second largest city will not.

In August the Los Angeles City Council voted 14-1 to replace Columbus Day with Indigenous Peoples Day, joining a growing number of communities across the country making this switch. In the last five years 45 cities in 20 states have either replaced or removed Columbus Day; 14 cities have done it in 2017 alone.

The state governments of Alaska, Hawaii, Minnesota, Oregon, South Dakota and Vermont have done likewise. While surveys suggest a majority of Americans continue to support Columbus Day, millions nationwide have walked away from it.

Some will no doubt view the move by Los Angeles as another example of Hollywood’s politically correct rewriting of history. But in fact Los Angeles has the second largest Native American population in the country, and the state of California as a whole has the largest number in the United States, almost 365,000 people. The Los Angeles council member who authored the bill to replace Columbus Day is himself a member of the Wyandotte Nation; when he took office four years ago, he was sworn in by his tribe’s chief.

Some will no doubt view the move by Los Angeles as another example of Hollywood’s politically correct rewriting of history.

The fundamental arguments for and against Columbus Day are well-established. Columbus’s trip across the Atlantic was a journey akin in its time to astronauts traveling to the moon; that he undertook it, let alone survived it, is astonishing. (Leif Ericson landed in Newfoundland almost 500 years earlier, an even more remarkable feat.) But his arrival in the Caribbean in 1492 also led to the forced colonization and eventual extermination of tens of millions of native inhabitants of the Western Hemisphere.

What goes largely unmentioned in the debate, however, is the way in which contemporary opposition to Columbus Day echoes the motives behind its inception. Christopher Columbus rose to prominence in 19th-century America largely through the efforts of newly landed Italian immigrants who were trying to overcome deep prejudice against them.

Pointing to Columbus as an American hero, Italians argued they had been of service to the country from its very origins.

Discrimination and abuse because of their country of origin, darker skin and Catholicism were commonplace. After 11 Sicilians were lynched in New Orleans for a crime six had already been acquitted of committing, The New York Times wrote in support of the mob, saying, “These sneaking and cowardly Sicilians, the descendants of bandits and assassins...are a pest to us without mitigation.”

Pointing to the Catholic and Italian Columbus as an American hero, the nation’s ur-pioneer, Italians argued they had been of service to the country from its very origins. And they were greatly helped in selling that idea by the Knights of Columbus, who at their founding in 1882 had identified themselves with Christopher Columbus for similar reasons.

“By taking the name of Columbus,” said Supreme Knight Carl A. Anderson on the 500th anniversary of the death of Columbus, “the Knights were able to remind the entire country of the Catholic roots of the New World, and to highlight the fact that faithful Catholics could also be good citizens, a fact that few would question today.”

“Celebrating Columbus Day does not honor their story and their struggle and their history; it insults it.”

(For those who have ever wondered how a Catholic magazine came to call itself something as oddly a-religious as America, the explanation is quite similar. At its founding in 1909 America’s editors choose the name as a way of asserting the relevance of Catholicism to American life and to suggest the permanence of a Catholic presence in the United States.)

Those who oppose Columbus Day today do so out of the same belief that something as seemingly innocuous as a federal holiday has the power to overcome or reinforce prejudice. And Italian-Americans’ status today—not foreign invaders but everyday Americans with the freedom to live as they wish, even to oppose attempts to change the holiday—highlights just how valid that belief is.

At the Los Angeles City Council’s public hearing, Councilman Mike Bonin noted that he had received one email from an Italian-American asking him not to vote in favor of the changing theme for the holiday, saying, “I ask that you do not take away the American Dream of our ancestors and their history.”

He added, “I think the best way as an Italian-American that I can honor their sacrifice and their heritage is to try and make the world better for their children and for my children. And part of that is trying to make a better world.”

Father Mc Dermott
I read the article headline (Italians deserve a better holiday) and your "suggested Tweets" and I feel compelled to ask: Exactly what is accomplished by attacking/revoking/ eradicating Columbus Day?
Is it an exercise in retribution?
What does renaming the day "Indigenous People's Day " do?

I note that one option would have been to just cancel the holiday.....but that means the proponents of the change would have to give up a "day off work". So it appears that while strong feelings propelled a change, they were not so strong as to lose the holiday's benefits.

Funny how it is Catholics who are targeted and accursed for genocide of the indigenous people of the "Americas." Missionaries in South America are denigrated for the atrocities of greedy, evil men from Europe who used swords to steal and murder a people who previously had stolen land from, committed genocide, and forced their gods on other nations of indigenous peoples.

If we are to remove national holidays of those with bloody hands let's get rid of Thanksgiving because the very same pilgrims later murdered and stole land from indiginous people. We celebrate Columbus Day not because he was a good man but because he sailed West and came back alive, thus making our country possible. History is full of villains of every nation and peoples on earth. History is also filled with saints of every nation and peoples. It's all part of the history of humans.

Apparently, "native americans" were not the first "indigenous" people here in North America. Evidence is mounting that they pushed out a previous population of European-centric origin:
Google: Smithsonian Magazine
the-very-first-americans-may-have-had-european-roots-5517714/?no-ist
The Very First Americans May Have Had European Roots

Some early Americans came not from Asia, it seems, but by way of Europe

Controversy erupted after skeletal remains were found in Kennewick, Washington, in 1996. This skeleton, estimated to be 9,000 years old, had a long cranium and narrow face—features typical of people from Europe, the Near East or India—rather than the wide cheekbones and rounder skull of an American Indian.

Kennewick Man has been debunked. There is no doubt the the first people arrived in the Americas from east Asia

Father McDermott,
A polemic of Political Correctness carried to its silly extreme.
This proposed rewriting of the historical record of Christopher Columbus ranks right up there with the many USSR leaders of the moment obliterating any references, pictures and record of previous member(s) of the Politburo.
What is next? No more references to Hispanic Americans and all Spanish, Portuguese speaking residents of Central/South America must give up their language and their European based names and revert to the names and language(s) of the indigenous peoples of the land.
Who is next,George Washington,Thomas Jefferson? Oh, former President Jefferson is already on the PC warriors hit list.

One gets the impression of one man landing somewhere in Florida, which he did not, and drawing his sword, proceeds west slicing the natives to pieces at every step.
Columbus was an explorer, an entrepreneur, betting his life to find a shortcut to the Indies. What he brought with him was Catholicism, the gift that remains in the countries of the Caribbean and Central America and remembered in the names of countless Islands and Cities throughout the region.
Was he a good man? Am I?

Italian Americans deserve a better model. Indeed we do if we insist that all historical figures we honor be near perfect models. I nominate Mother Frances Cabrini. The Irish have St. Patrick. Saints are good role models. Now as to Christopher Columbus, we acknowledge he was exceptional in the age of exploration, sailing under Spain’s banner, born in Genoa and came to the new world. He is honored for his feat. How about Washington and Jefferson who we honor as founding fathers; yet in spite of believing in breaking from England, wishing to shed our colonial status, kept their title as “master” over their slaves. Do we remove them from our currency? Just a thought about where we can go with this.

Italian Americans deserve a better model. Indeed we do if we insist that all historical figures we honor be near perfect models. I nominate Mother Frances Cabrini. The Irish have St. Patrick. Saints are good role models. Now as to Christopher Columbus, we acknowledge he was exceptional in the age of exploration, sailing under Spain’s banner, born in Genoa and came to the new world. He is honored for his feat. How about Washington and Jefferson who we honor as founding fathers; yet in spite of believing in breaking from England, wishing to shed our colonial status, kept their title as “master” over their slaves. Do we remove them from our currency? Just a thought about where we can go with this.

Well said, Antoinette. Rewriting history to suit contemporary political needs is deeply offensive to democracy. The United States is not a totalitarian system where human imperfections are purged from national memory, where there is only one version of history--the correct one.

While it’s not as bug-riddled as previous Windows versions, there are nonetheless a series of common problems that have been persistently identified by users of windows 10. To get proper solutions of the issues, take a look at https://techieans.com

Moderator!! We have an ad here. Please remove.

Every article in America is designed, not to make you think, to shake all confidence you have in what you believe. Whether that is Columbus, LGBT issues, married priests, abortion or same sex marriage, you must forget previous beliefs and consider a new groupthink.
This strategy is what the EPiscopalians/Anglicans used to successfully push their congregations off a cliff.

Too much "fake history" where Columbus is concerned. Unfortunately, so-called indigenous people (who were themselves immigrants and did not always treat new immigrants well) had continuous tribal wars and a slavery system of their own long before Columbus set out to the "New World." The first African slave was not brought to America until a generation after Columbus' death. What is it that's wanted? That the Americas should never have been discovered? Let's be just and get both sides of the story.