As Easter Sunday approaches, Parisians ponder the meaning of the Notre-Dame fire 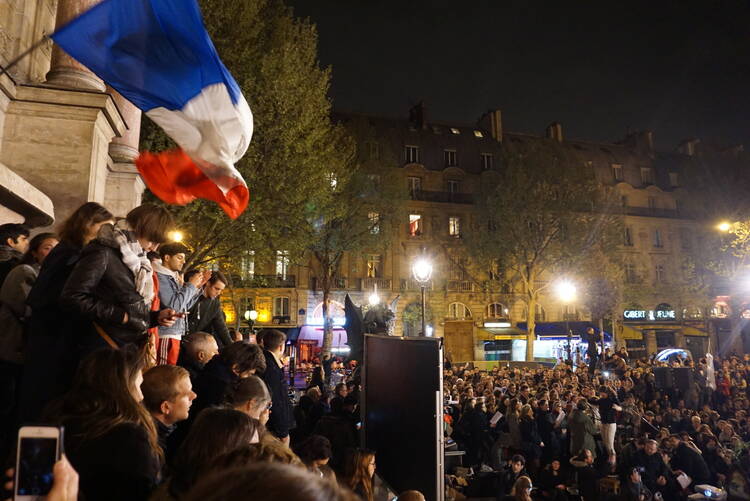 Prayers for Our Lady. Photo by Melissa Vida.

Paris woke up in a hazy smoke the day after a fire devastated the historic Notre-Dame Cathedral. Under a grey sky, thousands of Parisians and the city’s many visitors came to see the Grande Dame, “the Great Lady,” which is how locals affectionately refer to the iconic church at the heart of the French capital. The air was still thick with smoke and the ash burnt the eyes of the onlookers, who were relieved to see the cathedral still standing. For many Catholics, the coincidence of the blaze occurring at the start of Holy Week speaks of the greater mysteries of Easter.

The night of the fire nobody could tell whether the cathedral would be saved. On the evening of April 15, a fire was detected from within the church’s oak roof. As crowds gathered on the banks of the Seine, the fire grew until it consumed the roof and Notre-Dame’s towering spire. The world watched, aghast and breathless. After nine hours of uncertainty and fear, a brigade of 450 firefighters managed to control the flames. According to officials, had the fire been extinguished just 15 to 30 minutes later, it would have been too late—Notre-Dame would have collapsed.

Blanche de Bourbier, a college student at Sciences Po Paris, watched the inferno firsthand from her apartment. She was stupefied to see the flames appear to consume the cathedral and hear what she believed were windows popping under the pressure. “We can’t really imagine that it could happen,” she told America, because Notre-Dame “is so great, so beautiful; it is a bit untouchable.”

She went to pray on the river banks until 2 a.m. that night with thousands of other people. Fear, grief and faith bonded strangers together, who would take each other in their arms and pray.

Nearly two-thirds of the roof buckled under the flames, but the nave and the iconic front towers with its 42-foot diameter rosettes have survived. French prosecutors believe that an electrical short circuit was the likely cause of the blaze.

The images of the fire shook France and the whole world. Notre-Dame is a symbol of history, culture and faith that has stood for centuries. Built in the 13th century, the cathedral has witnessed the Crusades, the Renaissance, the French Revolution, the Paris Commune, two World Wars and the 2015 terrorist attacks. Notre-Dame is literally at the heart of France—it is the “kilometer zero” where the measurement of distance begins in France.

“The historic and religious symbols are not opposed,” Grégoire Catta, S.J., the director of the National Service for Family and Society at the Bishops’ Conference of France, told America. “It is both a place of history and a spot that connects our personal stories because we have lived big events there.”

The bells of the church rang for the liberation of France after World War II, and people gathered to pray there after Haiti’s 2010 earthquake. Notre-Dame was also the obvious place where people met to grieve the 2015 Paris terrorist attacks, where prayers morphed spontaneously into the French national hymn, “La Marseillaise.” Notre-Dame embodies a welcoming space for Parisians, visitors, Catholics and non-Catholics alike in times of despair and joy.

The air was still thick with smoke and the ash burnt the eyes of the onlookers, who were relieved to see the cathedral still standing. For many Catholics, the coincidence of the blaze occurring at the start of Holy Week speaks of the greater mysteries of Easter.

Notre-Dame’s blend of grandeur, darkness and light shone through its stained-glass windows, inviting contemplation. Of the 30,000 visitors it received every day, hundreds would proceed to confession inside its walls. Often, people had not planned on confessing before entering the church, but among the cacophony of visitors and group operators, they found solace in Notre-Dame.

Bernard Gillibert, S.J., was one of the priests who listened to people from all over the world in his confessional booth. He would ask those who had never spoken to a priest before why they have chosen that moment and people would answer, “I don’t know, it feels right.”

“They would be struck by the grace of Notre-Dame,” Father Gillibert said with a soft chuckle. “Especially in the long, dark and cold winter evenings, the atmosphere of prayer was stunning.”

People are now praying outside of Notre-Dame. The day after the fire, Blanche de Bourbier returned to nearby Place Saint-Michel to join a vigil organized by Catholic youth groups. Her anxiety transformed into hope. “Every generation has its share of reconstruction to do,” she said.

The vigil brought together 1,500 young people who gathered to reflect, pray and listen to medieval hymns performed by an orchestra and choir. The improvised congregation filled the square and people climbed up behind the fountain and on fences for a better view of the ceremony. The organizers read poems written by Victor Hugo, Charles Péguy and Paul Claudel, who is said to have converted to Catholicism behind a column in Notre-Dame.

Relief, serenity and hope characterized the vigil because Notre-Dame was saved but also because the fire happened during Holy Week, seen as a prophetic sign of the resurrection to come.

A photo taken of Notre-Dame’s altar after the blaze, in particular, has renewed the faith of the young people. The picture captured the blackened nave of the cathedral, a gaping hole in the ceiling, rubble tumbled in front of the altar but a bright cross suspended by two cables, somehow unscathed.

“[The photo] means everything,” Ms. de Bourbier said with enthusiasm. “For me, it represents the Easter message that everything is falling apart, but at the same time, there is hope. Despite the pain, the cross is still with us.”

The biblical verse Matthew 26:61, in which Jesus says he is “able to destroy the temple of God and rebuild it in three days,” inspired the faithful at the vigil. For many Catholics, the fire that consumed Notre-Dame served as a metaphor for the paschal mystery and might help the French church—struggling after recent revelations of sexual abuse and its concealment—emerge from its troubles. For some, the fire symbolizes the purification of the church that will eventually rise from the ashes.

The day after the fire, Blanche de Bourbier returned to nearby Place Saint-Michel to join a night vigil organized by Catholic youth groups. Her anxiety transformed into hope. “Every generation has its share of reconstruction to do,” she said.

“We are still very persecuted in the world, and the stories of pedophilia put us through an internal tragedy,” Father Gillibert said. “And in fire, there is death, but it is a purifying death. And then it leads to resurrection.” While people’s desire to rebuild the church immediately after the fire may indicate the need for the church’s resurrection, for Father Gillibert, it is a wake-up call.

Other priests, like the Rev. Emmanuel Coquet, a Parisian and secretary general of the Bishops’ Conference of France, pleaded with people to not make hasty links between the fire, the abuse within the church and Easter.

“There can be no direct comparison between rebuilding a church, which is still just a building, and the tragedy of the lives that have been ravaged by abuse,” he told America. Father Coquet, who was ordained in Notre-Dame, regularly has to deal with the investigation of abuse incidents.

“We will work and rebuild [the cathedral]; we have more money than what we’ve hoped for it, but what affects the church will take longer than the reconstruction of Notre-Dame,” he said. Restoring the French church may need a time of repentance, silence and recognizing that some things may never be repaired. “We must remain at the foot of the cross,” he said gravely.

For Louise Rose, a college student and organizing member of the vigil, the burning of Notre-Dame serves to remind Catholics not to find comfort in beautiful churches made of stone. “As the Catholic Church is facing challenges, some of which we would like to hide from, the fire is like saying, ‘Don’t find refuge in an image,’” she told America. “Because a cathedral is a beautiful image of us,” she added thoughtfully.

The destruction of Notre-Dame during Holy Week reminds her of the powerful message of resurrection.

“What Jesus comes to tell us in his death and resurrection is that we must let go of our natural attachments to material things and tell ourselves that stones will pass and that the material world will pass and what matters is the love you have for one another,” she said. 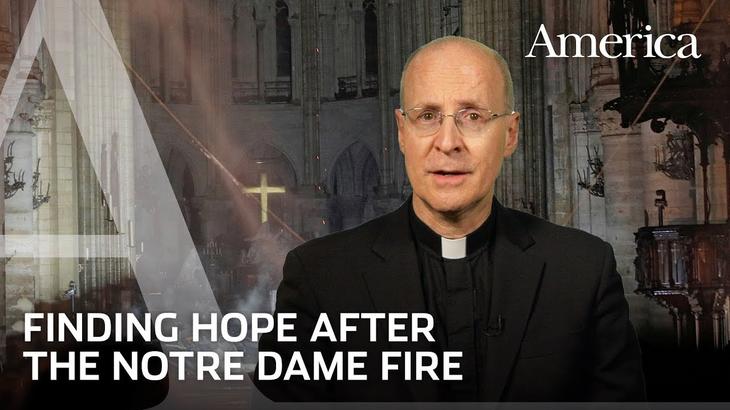 The impact of the fire at Notre Dame is significant. It is,,after all, a long lived image of a religion, a church, a nation, a people.. I don't think it needs to be restored unless. There is a national will to do so. As a religious symbol, Norte Dame has it beautiful rose windows, its Saint stautues, it relics. But as as a,symbol of France, of Paris, it is,indeed, iconic... it does remind us of the impact that medieval beliefs had upon
those who lived therein. Do those values remain real to us today? Let us see how the reconstruction of Our Lady's Cathedral progresses.

The yellow vests are upset that people are donating money to restore Notre Dame. They are rioting this Easter weekend in protest.