Grieving the fire of Notre Dame during Holy Week 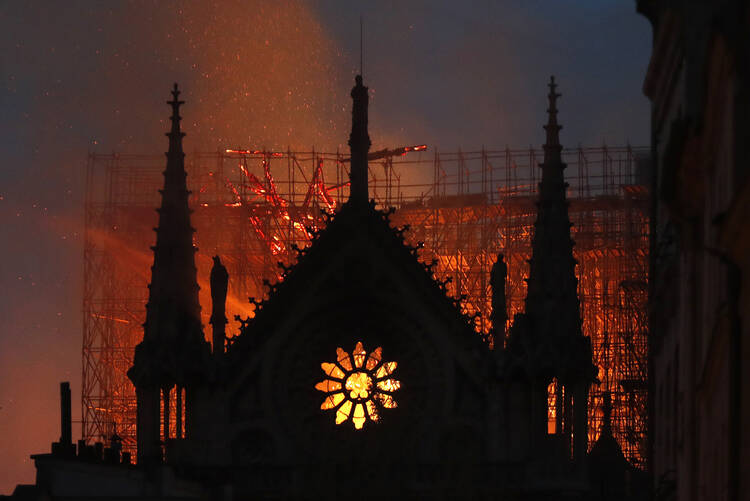 Flames and smoke rise from Notre Dame cathedral as it burns in Paris, Monday, April 15, 2019. Massive plumes of yellow brown smoke is filling the air above Notre Dame Cathedral and ash is falling on tourists and others around the island that marks the center of Paris. (AP Photo/Thibault Camus)

I watched Notre Dame cathedral burn with a pit in my stomach and tears welling up in my eyes. The spire has fallen. The fire is raging through the cathedral still, and we do not yet know the extent of the damage.

Andre Finot, a spokesman for Notre Dame, said the entire wooden frame of the cathedral will likely come down and that the vault of the edifice could be threatened, too.

“Everything is burning,” Mr. Finot told French media. “Nothing will remain from the frame.”

The first time I traveled abroad, I went on a pilgrimage to the Vatican with my high school youth group. But first we stopped in Paris. There I was, 16 and sweating on a hot July day, staring up at the rose window on the building’s façade that I had only seen in pictures. I attended my first Mass in a foreign country and went to confession with a gentle priest with a thick French accent. This was my first indication that my Catholicism was global, beautiful and rooted in history.

I learned that the construction of the cathedral began in the early 12th century and would take nearly 200 years to be finished. The men who laid the first stones would never see the finished fruits of their labors. I remember wondering if I would have the humility to contribute to such an endeavor, or if any of us still did.

Now is a time for grieving. Notre Dame is a French Catholic treasure that belonged to more than the French and the church. It evokes thoughts of God from the religious and nonreligious alike. Its flying buttresses are a marker of architectural innovation, and its spires and stained glass icons of the Gothic era. And it has borne witness to the joys and tragedies of Paris for over eight centuries, outlasting kings and commanders, wars and revolution.

I returned to Paris in 2016, hoping to marvel again at the hunk of stone that grounded me in my capital-C church and to peer through the rose window that lifted my eyes toward heaven—but historic flooding on the Seine had shut down most of the city, the cathedral included. I had to settle for a view from Shakespeare & Co. across the Île de la Cité , thinking I would have another chance someday to walk inside and pray.

During the last two weeks of Lent, many Catholic churches around the world cover up their religious icons and images, including their crucifixes. Catholics, known for our extravagant use of imagery in prayer and liturgy, turn away from it in the holiest week of the year. In penance and mourning, our senses suffer along with the suffering Lord.

The crucifix that hangs prominently above the altar at my parish was covered by a large purple cloth last night for Palm Sunday, shrouded during our observance of Passiontide. The congregation stood, listening to the passion of Jesus, without any visual reminder of his death on the cross. The implication, our priest explained, is that even hearing or reading about a crucified god is enough for our imaginations.

Is Paris Worth a Mass?: Space, place and liturgy in Notre Dame
Dennis McNally

That lesson clicked today after I saw the spire fall from the top of the cathedral. I had to turn off the livestream. It does not take a pious person to draw the connection of a bloody, broken and dying Jesus to an all-consuming fire destroying one of the world’s most beloved and iconic churches. The floor plan of the cathedral is cruciform—meant to resemble the cross on which Christ’s body was hung. Our Lady, who stood weeping at her son’s crucifixion, surely weeps for the cathedral dedicated to her name.

Notre Dame has survived the deliberate destruction of the French Revolution and the indiscriminate bombings of World War II. Yet this fire has the potential to do more damage than the cathedral has ever seen before. Regardless, it will rise again—even if, like Christ, it bears the wounds of the past.

But the view of Easter Sunday is never murkier than through the haze of Good Friday.

Zac Davis - thank you for your beautiful words. I agree that it will rise again.

Will Nier
3 years 9 months ago

France is full of cathedrals which have been routinely devastated by fire -- first example is Chartres which was formerly a Romanesque church rebuilt after a fire in the 11th century. Charters was rebuilt out of the wealth arising from the mini-global-warming of the 12th century.

How about Beauvais for which the engineering underestimated the wind-shear and hydroscopic underpinnings (sic) which would result in its partial collapse.

Surprising to me is that Paris does not seem to have the kind of "pumper" truck (the FR fire personel are "pompieres") to extract water out of the seine.

It's a pity to be sure, but there are plenty of places to celebrate mass in Paris and among my favorites is St. Honore d'Eylau where you can hear Gregorian chant.

I visited the cathedral on my one visit to Europe many years ago. A beautiful place. But as beautiful as it was, it was just a building. "the Most High does not live in houses made by human hands" and "Jesus said .... Cleave the wood: I am there; lift the stone and thou shalt find me there".

Reading the previous posts, I was intrigued to find a few others thought about the abuse crisis while watching this icon of Catholicism go up in flames as the world watched helplessly. Strangely enough, just a day or two prior I had responded to a recent America article about Pope Benedict’s “Conservative” interpretation of the whole, bloody, unholy mess, writing that it is way too late for such a remedy, and has already been proved false, using these words, or something similar,.. “The house ( Church ) is already on fire. We can’t go backwards. We have to move forward and help Survivors heal.” Strange

As a New Yorker, when I saw the spire fall, I flashed on the towers falling here almost 20 years ago.

And there is no subtext to that at all. I just felt the same tightening in my gut that I hardly ever feel and I felt it again looking at Notre Dame's spire come down over and over and over on tv.

I have heard commentary about making meaning of the fire at Notre Dame, in the midst of Holy Week. Messages of hope, messages about the suffering of Christ, and of course that it is Godly retribution for the sins of the Church. As I watched the fire live on my television, I could not help but recall that it was not only Holy Week, but Monday of Holy Week, when we focus attention on Jesus clearing the temple, condemning those who pay lip service while allowing others to suffer, who are so enamored of power they undo their purpose in its maintenance, who put money ahead of the fruits of their good deeds as a measure of their sanctification. In looking at the hope, and rising from the ashes, of resurrection instead of crucifixion, we miss that the biggest sin of the religious hierarchy and many followers was that their allegiance was more about appearance than it was about remaining true to the message. This then became the doctrine of justification through membership alone ... which is far from the message of Jesus. Eventually it became convoluted to the prosperity gospel which is preached by some very wealthy "men of God" who display ostentatiously their wealth as sign of God's approval, and take from the poor in direct opposition to the Sermon on the Mount. It is a time for reflection. If I take any message from it, if I am to see at all any sort of Divine hand or prophetic meaning, it is that once again, Jesus cleared the Temple, and we need to take heed of that warning.

It was an accidental fire, no one was killed, the relics were saved, there were no major works of art there, the main draws of the cathedral (the flying buttresses, rose windows, gargoyles) are ok. There's already enough money pledged to fix what's been damaged. This doesn't have to be a tragedy.

Jose A
3 years 9 months ago

We should as Catholics take this a message from "Our Lady." We need to re-build our church physically and spiritually metaphorically speaking. As St Francis was given the message to rebuild God's church so should we see the message so clearly given by Mary our mother. Now is the time to renew this Easter Season! The timing and message couldn't be any clearer.

I recall that Jesus said about the jubilation of people in Jerusalem at His entry as a King "I say to you that if these shall hold their peace, the stones will cry out."

Notre Dame de Paris was just that, the stones crying out as the people self-identifying as Catholic at about 50% of whom only 5% attend Sunday Mass.
A building of stones, a token of the faith of their ancestors, now a tourist attraction.

Living in Paris for a short time and trying to continue my daily Mass attendance was distressing. Never more than 10, and often less, fellow worshippers and them all very old no matter which small church I found for each morning, and the presbyter ancient.

A contemporary comment; the cathedral was the property of the state and the church administrators and state officials were perpetually at odds about many aspects of maintenance of the national treasure: another church governance incompetence?