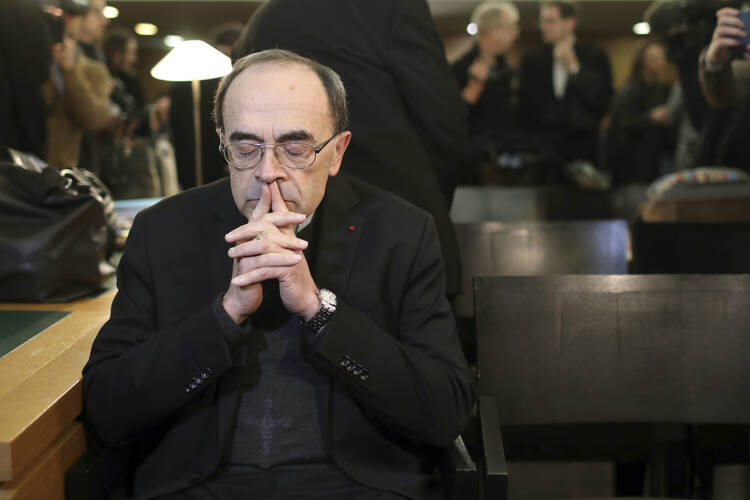 In this Jan. 7, 2019 file photo, French Cardinal Philippe Barbarin waits for the start of his trial at the Lyon courthouse, central France. (AP Photo/Laurent Cipriani, File)

A French court today condemned Cardinal Philippe Barbarin, 68, the Archbishop of Lyon, for not reporting a priest in his diocese to the civil authorities for the sexual abuse of minors. The court imposed a six-month suspended prison sentence on him, meaning he will not have to spend time in prison.

Cardinal Barbarin told journalists after the verdict: “I have decided to go to the Holy Father to hand in my resignation. He will receive me in a few days.” He said he “took note of the decision of the tribunal, and independent of my personal fate, I wish to reaffirm all my compassion for the victims.” The Vatican has yet to comment on the verdict.

French media reported that the victims were overjoyed when the judge announced that he found the cardinal “guilty,” they said it was more than they had hoped.

Cardinal Barbarin told journalists after the verdict: “I have decided to go to the Holy Father to hand in my resignation. He will receive me in a few days.”

On March 6, Ms. Charlotte Trabut, the deputy-prosecutor, told the court in Lyon that she would not ask for a conviction of any of those on trial because the statute of limitations had expired. Besides the cardinal, five other clerics from his diocese were on trial in relation to their involvement in the case.

The cardinal’s lawyers, however, were clearly disappointed and announced that they will appeal the case.

Cardinal Barbarin, who was not present in court, is the third member of the college of cardinals to be publicly linked to the abuse scandal in the church. The others were Theodore McCarrick and George Pell. He and Cardinal Pell are still cardinal electors with a right to vote in a conclave.

“I do not know what I am guilty of,” the cardinal said recently. He has always denied the charges brought against him by the victims of Father Bernard Preynat, who sexually abused them as minors in the 1980s and 1990s when they were Boy Scouts. They accuse the cardinal of knowing earlier than he admits and for not denouncing this fact, which in the French legal system is considered an obstruction of justice.

French media reported that the victims were overjoyed when the judge announced that he found the cardinal “guilty,” they said it was more than they had hoped.

He told the court on March 4, "I have never tried to hide, let alone cover up these horrible facts." He said he had “heard rumors” about the abuse “in 2007 or 2009” and he spoke to the priest abuser in 2010 who denied the abuse. The cardinal said he got precise information of the abuse in 2014 after speaking to one of the victims and then informed the Vatican’s Congregation for the Doctrine of the Faith. The C.D.F. responded with a letter from the then secretary of the congregation Archbishop (now Cardinal) Luis Ladaria. The letter instructed him to remove the priest from all ministry in which he would be in contact with young people but to do so, if possible, in a way that avoided public scandal. Cardinal Barbarin removed the priest from that ministry but never informed the police.

Nine men who allege that they were sexually abused by Father Preynat brought the civil case against the cardinal and other defendants in Lyon High Court, with the assistance of Le Parole Libérée, the victims’ association they set up in France. They considered it of the utmost importance that the case was heard in a court, even if the statute of limitations had expired. They have worked three years for this result.

The case, which is the first major trial for pedophilia in the French Catholic church, has led to the making of the film “Grace of God,” which was presented recently at the film festival in Berlin. Father Preynat will face trial at the end of the year.

So he is responsible for ruining men's lives and he get's no punishment that is substantial. So he had the funds either financially or intellectually or through prestige to avoid punishment. Bull.