What Michelangelo’s flawed Pietà teaches us about Mary 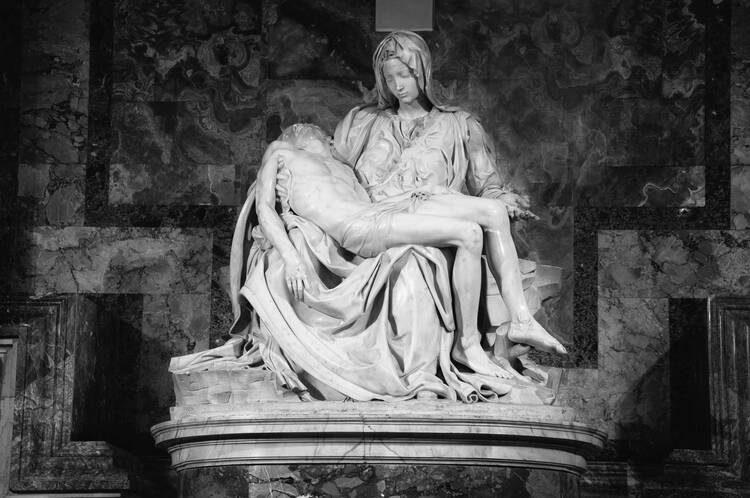 Sister Wendy Beckett, the amateur yet acclaimed art critic who died this past week, declared that it was her favorite of the Vatican’s many treasures, one she would not trade for all the rest. Michelangelo’s Pietà is one of the world’s most well known and beloved masterpieces. Part of its magic is the depth of its mystery.

Renaissance sculptors were masters of making marble look so soft as to fold like fabric. Michelangelo was among the best. The piece is a solid and massive unit. Yet movement courses over all its surfaces.

The masterpiece comes with a major flaw, which Michelangelo, perhaps wryly, insisted was a manifestation of grace. Jesus looks his age. He appears to be a dead man in his mid-30s. But you needn’t look all that closely at the Madonna to see a teenage mother. When his critics drew attention to this age discrepancy, Michelangelo quipped, “Chasity enjoys eternal youth.”

The fullness of Mary’s grace, of which the Archangel Gabriel spoke, is manifested in the strength of her suffering.

There is another significant flaw. If the dead figure of Jesus were to stand erect, he would be about six feet tall. If his Mother Mary, who holds him in her lap, stood up, she would be more than twice that height. Most viewers never notice this. Michelangelo knew that the figure of a fully grown man in the lap of a woman would look ungainly, disproportionate. And what he wanted above all in this piece was to display proportion, harmony and completion between the man and the woman.

So his Mary is massive, and unlike so many depictions of women, she exudes strength. Without apparent effort, she holds her dead son in her arms. Her shoulders are not bent; they do not seem to strain. Even her face is still, silent and solid. If, so often, the sad fate of women is to bear what men have wrought, she does this like no other. The fullness of her grace, of which the Archangel Gabriel spoke, is manifested in the strength of her suffering.

The tortured body of Jesus is in sharp contrast. It is much more fluid. Sister Beckett likened it to a flowing river. It is a stream of grace, coming down from the mountain that is the woman.

If, so often, the sad fate of women is to bear what men have wrought, Mary does this like no other.

Sister Beckett also thought the Pietà to be an utterly unique image of the unity of man and woman. So much seems reversed, the very opposite of our sexual stereotypes, but together, the sorrowful mother and—yet at this moment—stillborn Son are one.

Michelangelo’s mother died very young. Here, mother and son are given back to each other, never more to be parted. The mother, who cradled in her arms the living child at Bethlehem, now holds in those same arms the dead Son who has given his life for her and for the world.

A pregnant pause: Mary and the Annunciation
Vanessa R. Corcoran

What could be more heartrending? Until we remember that the Son she holds is, in this moment, still-born on the edge of eternity. In three days he will come forth from the womb of creation itself as the living, glorified Son of God.

Here Calvary echoes Christmas, just as Christmas prefigures Calvary, if we read the full account of the infancy narratives and not just those parts that charm us on Christmas Eve. Mary bore a son who came among us to love us, to teach us, to heal us, to suffer and to die for us. Like a rock she holds him now at the end of his life. She is riven like the rock Moses struck in the desert. The heart of this rock has been broken and from it cascades a flood of grace and mercy.

Maria! Maria!
I am drawn to great art

Maria! Maria!
Steadfast for you

One cannot but accept that at the moment of the Annuciation Mary had some vision of the trials ahead in her life, and she still gave assent.

You've ruined it for me, I will forever see Mary as rendered in the Pieta as monstrously disproportioned. Sometimes, in matters of art and beauty ignorance is a blessing, perhaps, all beauty is a deception: requiring a certain detachment or surrender to delusion or suspension of our too critical faculties. and we should never look to close or apply too much analysis less we lose the capacity to escape the true confines of our physical reality. But, as Picasso once claimed, all art is a lie which reveals the truth. Let's hope that you aren't too widely read, at least in this instance.

people overlooked another anomaly: the difference in scale between the Virgin and the Christ lying across her knees.
Michelangelo must have begun with a fascination for the cross design—the Virgin vertical, Christ horizontal. But he saw that the Virgin’s narrow body did not have enough mass, even with all the drapery, to fill out the areas left and right of Christ’s body if it was going to lie completely lengthwise in her lap. He had no choice but to widen her body and hide its gigantic size as he could. And to reduce in scale the body of Jesus, which is perfect according to its own laws but much too small—petit, doll-like—by comparison with the Virgin’s.
Stand the two figures up and see which is bigger. See how wide the Virgin’s shoulders are. Compare her hands with those of Jesus. What about that huge pillar (the Virgin’s leg) that supports the “little” Jesus?