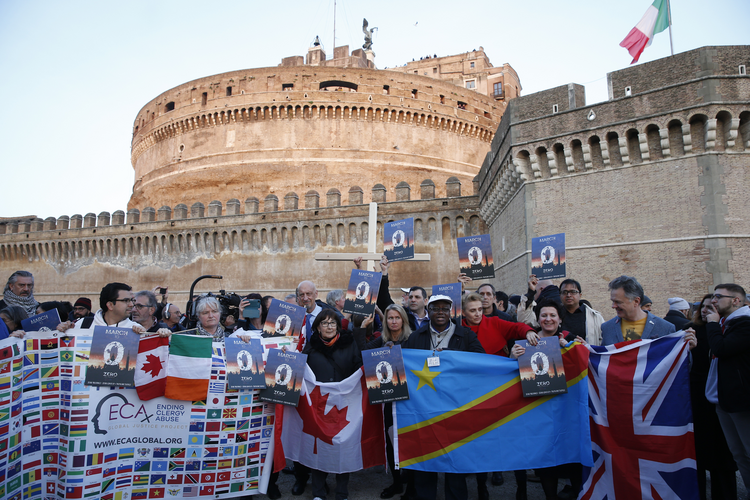 A group of nearly 200 Catholic leaders including cardinals, lay experts and philanthropists, who met in Washington last month to discuss the church’s ongoing sexual abuse crisis, released a report with dozens of recommendations just days after a global summit of bishops in Rome concluded their gathering about the same topic.

Kim Smolik, the head of the church reform group Leadership Roundtable, said in a March 1 statement that the recommendations “demonstrate how the church can create a new culture of leadership, as well as a new culture of how to respond to abuse.” The report, which included ideas for bishops and laypeople, called for “Catholic leaders to take swift and bold action.” When it comes to the role of the laity, the report’s authors said women, theologians and philanthropists must be utilized more by church leaders in order to create cultural change.

The Leadership Roundtable’s suggestions include developing a “code of conduct” for bishops and other ministers that “recognize[s] abuse of power not only against children, but also adults.” The report includes a call for greater transparency in a number of areas, including church finance—especially when it comes to donations and sexual abuse settlements—and in the process for selecting bishops. It suggests including laity in that process, empowering laypeople to assess how a potential bishop has handled allegations of abuse by priests.

Survivors of abuse and their advocacy organizations had expressed frustration with the lack of specific recommendations at the conclusion of the Vatican summit.

The report recommends a number of changes related to communications and transparency, including investigations into cases of abuse that happened after 2002, when U.S. bishops implemented the Dallas Charter, and to publicize the findings of the various inquiries into the abuses allegedly committed by former Cardinal Theodore McCarrick. It says all the names of all “credibly accused” priests should be published.

The Leadership Roundtable is the latest Catholic group to react to the Vatican summit, which ended with few changes to church policy but with promises from the pope and other church leaders to make combating sexual abuse a priority. To help with that, the Vatican announced it would distribute a guide of best practices to bishops’ conferences and consider a task force to help under-resourced dioceses implement them.

The University of Notre Dame announced on March 4 that it would spend up to $1 million to fund “research projects that address issues emerging from the crisis” and host events on campus to educate the public about the church’s response to sexual abuse.

“Real progress will be achieved by initiating with others processes that include careful thought, study, continual improvement of laws, policies and practices, and sustained support for survivors,” said the Rev. John Jenkins, president of the university. “Most of all, it requires a change in hearts that leads us to a common and dedicated effort to prevent sexual assault, harassment and abuse in any form by anyone.”

Survivors of abuse and their advocacy organizations had expressed frustration with the lack of specific recommendations at the conclusion of the Vatican summit. Peter Saunders, a survivor of clergy sexual abuse and a former member of the Vatican’s child safeguarding commission who resigned in protest in 2017, said he was disappointed by the pope’s concluding address.

“If a person in a country were to ordain women, you can bet that the Vatican would act with alacrity and get rid of that bishop.”

“The fact that it lacked passion or commitment was one thing, but it contained nothing concrete,” Mr. Saunders told America during an interview on Feb. 24 in Rome. “They’ve had four days to decide on the things they could do that would make a difference and they’ve avoided that.”

Many victims’ advocates had said the meeting would be a success only if it resulted in changes to church policy that included a church-wide zero-tolerance policy toward child sex abuse, like the rules U.S. bishops adopted in 2002, as well as new rules to hold bishops accountable. That did not happen.

“They could have done that. They failed to do it,” Mr. Saunders said. “More Catholics will leave the church and we will all become more determined to keep the pressure on this institution.”

Some church leaders have said that the challenges in protecting children require a cultural transformation among the hierarchy, which will take more than changes to church policy.

Anne Barrett Doyle, in Rome representing BishopAccountability.org, dismissed that explanation as an “an excuse and a rationalization.”

The pope has made decentralization a priority of his pontificate and following the summit, it appears he wants to do the same with child protection, urging the heads of bishops’ conferences to create their own codes, perhaps with the help of Rome. But Ms. Barrett Doyle said in an interview with America on Feb. 24 that when it comes to other issues of global significance, the Vatican has not shown the same reservations about acting as an enforcer. “If a person in a country were to ordain women, you can bet that the Vatican would act with alacrity and get rid of that bishop,” she said.

During the summit, which included about 190 bishops from around the world, Pope Francis released a list of 21 “reflection points” related to abuse. They included ideas about how bishops should handle allegations but, at least so far, have not resulted in changes to church policy.

In response, the Survivors Network for Those Abused by Priests released on Feb. 24 its own list of “21 steps that you can take to help prevent abuse, protect children, and support survivors.” The items include reporting suspected abuse to law enforcement, inviting survivors of sexual abuse to share their stories at churches and pressing church leaders to publish the names of credibly accused priests.

Still, some survivors of abuse expressed cautious optimism. Speaking to NPR, Juan Carlos Cruz, a survivor from Chile who lives in the United States, said he trusted the pope to handle the crisis, but added he wants to see bishops held accountable.

Editor’s note: The author was an employee of the Leadership Roundtable from 2009 to 2014.

View our complete coverage of the abuse summit.

This is where I want to tell all these groups, who supposedly want to help all the abused kids, to go stuff it! Because you understand the following: “If a bishop in a country were to ordain women, you can bet that the Vatican would act with alacrity and get rid of that bishop,” she said, but you don't give a damn about what you have just said. Sexism is a real and extremely destructive abuse of women.

How many of your groups, Voice of The Faithful, Future Church, Network, and others have I pleaded with personally to fight against the evil of misogyny and all of its direct effects in our church (pedophilia being one of them). How many times have I begged you all to stop promoting a furtherance of sexism, by promoting gender segregation, through pushing for optional celibacy, until women are being equally ordained priests or by no longer accepting permanent male deacons leading in our churches in any way? Yet all of you tell me that this is not something you have voted to take a stand for (women's same treatment and ordination) because it upsets the hierarchy too much and some change is better than nothing. Trump was a change - not all change is good.

Since the above statement from the article is correct, what does that tell you but that if you wanted women ordained priests then you could demand this abuse of women's humanity be put to an end immediately. A pope and leadership that can persecute any bishop who does ordain women can also protect them if they feel themselves losing the support of their flocks. No leadership remains in power long without at least the complacency of its members.

Any group of protesters who are afraid to upset the hierarchy by demanding an end to a sexist run church, which neither Christ or the original 12 claimed anywhere to support and not oppose, are as culpable for the damage done, as that hierarchy, because what you could have done, to change things concretely, for both children and women, you refused to do.

Patriarchy, especially, if it serves no reason outside that of sexism, and of course sexism itself, especially sexism in religion, lead to the abuse of women and children. These are well evidenced facts. They are so well evidenced that no one really disputes them. Married men sexually abuse children more than single men and yet these are the ones your groups want ordained next. So what are we to figure these groups really care about? since it definitely is not women or children?

Nora is absolutely right! After the big Vatican Abuse Summit the players are all spouting reforms and regulations like scattered "buck shot". They don't seem to get it: A total cultural restructuring of the Church---starting with the Patriarchy---is the only way this Church will survive.

The church has lost ground in moral authority here; many that I know do not look to the church for moral leadership at this time. I expect some will also be shifting their charitable support of church charities to secular and environmental charities that do have higher moral standing, and perhaps to political causes. Sad.

I've been on a few task forces in my time. When we didn't want substantial change we blustered about the need for change and wagged our collective fingers. Lots of pathos, little logos. When we wanted real, concrete change, we agreed not to decamp until we had accomplished this.

To end the abuse, end mandatory celibacy and allow women to be priests. The pope won't do this, and we pew potatoes have no power. We need priests to demand these changes. When the then pope wouldn't get rid of Cardinal Law, 58 priests wrote him a letter telling him to leave. Where are the priests who will stand up for women, for an end to the ridiculously flawed mandatory celibacy rule? Is your job security really the most important thing in the whole world?

It is an interesting question. Should parents help their kids with homework? have a peek here for an open discussion.

This classic book about witchcraft is a must read for all psychics. . We should bring all psychics to Rome and make them Cardinals and bishops. Which would be a step up from the present crowd who foster superstitions and clerical worship over crucifixion and Samaritan Christianity. From Richelius to Pell they have insisted that we see what we do not see and that to follow their rule is the way to salvation.

Povero noi as Pope Francis has to deal with all these witches. It will take a long time for the Carnival to be over. Because they love their cavernous apartments and long gowns and false adulation. Popes come and go but the carnival remains forever.