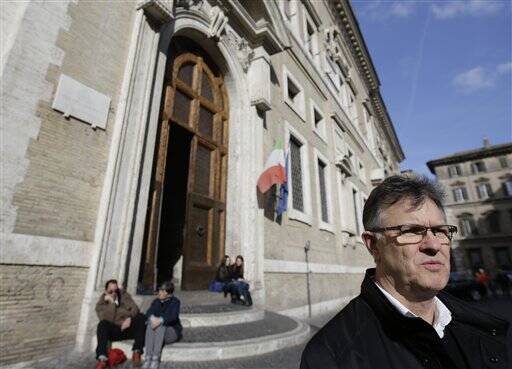 The commission set up by Pope Francis to advise him on the Protection of Children has “decided” that Mr. Peter Saunders (UK), one of the two survivors of sexual abuse on this body, should “take a leave of absence from his membership to consider how he might best support the commission’s work.”

It announced this in a statement released to the press after its meeting on Saturday morning, Feb. 6. It said that at that meeting the commission members had “discussed the direction and purpose of the commission” and “as the result of this discussion” it took its decision.

Pope Francis appointed Mr. Saunders to the 17-member commission on Dec. 17, 2014. A British survivor of sexual abuse as a child, Mr. Saunders had set up Britain’s National Association for People Abused in Childhood to support survivors and develop better resources for responding to such abuse. He joined Marie Collins, an Irish survivor, whom the pope had appointed to the commission the previous March. Their presence gave added credibility to the commission and to the pope’s determination to deal with abusers, hold bishops accountable and ensure the protection of children and minors in all church institutions.

To understand today’s decision by the commission it is worth noting that from the beginning its role was meant to be an advisory one to the pope. Francis spelled this out clearly in a chirograph on March 22, 2014 when he wrote that its “specific task” is “to propose to me the most opportune initiatives for protecting minors and vulnerable adults, in order that we may do everything possible to ensure that crimes such as those which have occurred are no longer repeated in the Church. The commission is to promote local responsibility in the particular Churches, uniting their efforts to those of the Congregation for the Doctrine of the Faith, for the protection of all children and vulnerable adults.”

From the beginning, however, Mr. Saunders appeared to interpret his role as a more active, campaigning one, rather than advisory. He publicly expressed unease at what he perceived as the slow pace of the new commission, particularly regarding the accountability of bishops. He clearly overstepped his role as a commission member by giving statements to the media in that capacity in which he criticized what he saw as Cardinal George Pell’s failure to protect children in Australia, and the pope’s appointment of Bishop Juan Barros to the diocese of Osorno in Chile in January 2015. He threatened to resign if the pope did not rescind the latter’s nomination, because he believes there is credible evidence that the bishop covered up for a predator priest, Fernando Karadima.

The commission’s role, however, is to advise the pope how to deal with these and other matters, but Mr. Saunders clearly wanted it to take action in a more challenging and, perhaps, even confrontational way. And when it was made clear to him that the commission had no mandate whatsoever to deal with individual cases or to investigate cases of abuse, his public statements to the media—for instance in the case of the Chilean bishop—suggest that he took little account of this and clearly thought otherwise.

Mr. Saunders was in Rome this week for the third meeting of the papal commission. On the eve of that gathering, however, speaking to the Los Angeles Times, he expressed himself in highly critical terms of Francis, charging that the pope had said “phenomenally damaging and painful things about survivors” in relation to the Chile case, and said that people in that country now see the commission “as a laughingstock” and added that he, too, would consider it meaningless “unless he sacks Barros.”

His public role and challenge to the pope became a cause of real concern in the Vatican, and was seen as being distinctly unhelpful to the important task that Francis has given to the commission, and indeed risked damaging its credibility. With his latest comments to the L.A. Times, Mr. Saunders left the commission with little other option except to ask him to take a leave of absence.

Later at a press conference at a hotel in Rome with Juan Carlos Cruz, a Chilean survivor of abuse by Fernando Karadima, Mr. Saunders read a written statement in which he charged that at this morning’s meeting “commission members reacted to my criticisms in a frightening way, acting as if dissent and free speech would make their work more difficult.”

Giving his account of what happened at the meeting, he said: “I was asked to consider what my role should be with the commission. I did not make a decision to take or accept any decision on a leave of absence. I said I would reflect on what I would do. I may well have been back in the meeting shortly.”

However, he said, “I then heard that the Vatican had made a statement about my taking a leave of absence. I was never told in advance of any such statement and I find it outrageous that I was not told, much less that the statement occurred before I had had any time to reflect on what I might do next.”

Mr. Saunders then went onto clarify his position: “I have not left and am not leaving my position on the commission. I was appointed by His Holiness Pope Francis and I will talk only with him about my position.”