Nigerian sister asks bishops: Why did the church allow atrocities of sex abuse to remain secret? 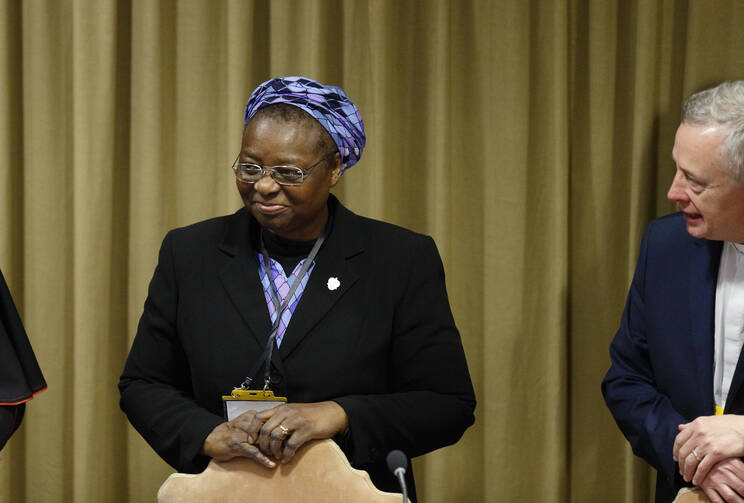 Nigerian Sister Veronica Openibo, congregational leader of the Society of the Holy Child Jesus, attends the third day of the meeting on the protection of minors in the church at the Vatican Feb. 23, 2019. (CNS photo/Paul Haring)

Acknowledging that the church is currently “in a state of crisis and shame,” Sister Veronica Openibo told bishops gathered in Rome that it was with “a heavy heart” that she reflected on the ongoing abuse crisis, urging church leaders to “acknowledge that our mediocrity, hypocrisy and complacency have brought us to this disgraceful and scandalous place we find ourselves as a church.”

Sister Openibo, a member of the Society of the Holy Child Jesus from Nigeria, spoke to the nearly 200 bishops gathered in Rome for the Vatican’s four-day summit on fighting child sexual abuse by clergy.

Using candid language to describe the abuse crisis and occasionally directly addressing Pope Francis, who sat just a few feet away, Sister Openibo said “tears of sorrow flowed” after she watched “Spotlight,” the 2015 film that chronicled The Boston Globe’s reporting on sexual abuse committed by priests and its cover-up by bishops.

“How could the clerical church have kept silent, covering these atrocities?” she asked.

“How could the clerical church have kept silent, covering these atrocities?” Sister Openibo asked.

Sister Openibo, who serves on the executive board of the International Union of Superiors General, said the church has at times failed to live up to its own moral code.

“We proclaim the Ten Commandments and parade ourselves as being the custodians of moral standards,” she said. “Hypocrites at times? Yes.”

The summit’s sole speaker from Africa and one of just a few women on hand for the meeting, Sister Openibo tried to dispel the notion that sexual abuse of minors by clergy and the cover-up by bishops is unique to North America and Europe, saying, “I have heard some Africans and Asians say, ‘This is not our issue in countries in Africa and Asia, it is the problem in Europe, the Americas, Canada and Australia.’”

She said she heard of abuse in Nigeria as far back as the 1990s and that issues of sexual abuse are “already exploding in some Asian and African countries in the same way that it has elsewhere.”

During the summit, bishops from the United States, Europe and Australia have urged caution when it comes to universal changes in church rules, saying that local cultures could require nuanced policies. But Sister Openibo said that church leaders should not make excuses when it comes to confronting abuse.

“The fact that there are huge issues of poverty, illness, war and violence in some countries in the Global South does not mean that the area of sexual abuse should be downplayed or ignored.”

“The fact that there are huge issues of poverty, illness, war and violence in some countries in the Global South does not mean that the area of sexual abuse should be downplayed or ignored,” she said. “The church has to be proactive in facing it.”

She said silence and a culture of clericalism were especially toxic when it comes to holding abusers accountable.

“It worries me when I see in Rome and elsewhere the youngest seminarians being treated as though they are more special than everyone else, thus encouraging them to assume, from the beginning of their training, exalted ideas about their status,” she said.

“What damage has that thinking done to the mission of the church?” Sister Openibo asked.

“Let us not hide such events anymore because of the fear of making mistakes,” she said, adding that the church’s “credibility is at stake.”

“Let us not hide such events anymore because of the fear of making mistakes,” she said, adding that the church’s “credibility is at stake.”

Sister Openibo called for the church to “build more effective and efficient processes” that incorporate both canon and civil law in order to protect children and offered several ideas on how to move forward, including publishing complete lists of accused priests, sharing resources to help poorer places confront abuse and providing better training for church personnel.

Cardinal Tagle at abuse summit: How do we balance justice and forgiveness?
Michael J. O’Loughlin

Toward the end of her talk, Sister Openibo addressed the pope as “brother Francis” and lauded him for admitting he made a mistake when, after he first learned of abuse mismanagement in Chile, he dismissed the allegations as “calumny” before reversing course and accepting the resignations of bishops.

“I admire you, brother Francis, for taking time as a true Jesuit to discern and be humble enough to change your mind, to apologize and take action,” she said, calling it “an example for all of us.” She thanked him for “providing this opportunity for us to check and see where we have acted strangely, ignorantly, secretly and complacently.”

As for the summit itself, Sister Openibo concluded her talk by saying she hopes “we will choose deliberately to break any culture of silence and secrecy among us, to allow more light into our church.”

Thank you, Sister.
Here's another voice of Africa, whose title alone gives a clue to the necessary movement of the institutional church:
https://newbooksinpolitics.com/get/ebook.php?id=Ut42QpwmFbkC

Thank you Sister Veronica Openibo. This is about our faith, our Christian faith, our Catholicism, and not about the arcane, silly, self serving, and destructive politics that has come to negatively and destructively define the present moment. Sister Openibo, may God in His infinite wisdom, kindness, mercy continue to bless you, guide you, strengthen you and continue to inspire you to carry out His (God's mission) mission on earth among all God's people.

Thank you Sister Your words hit the bullseye!!!