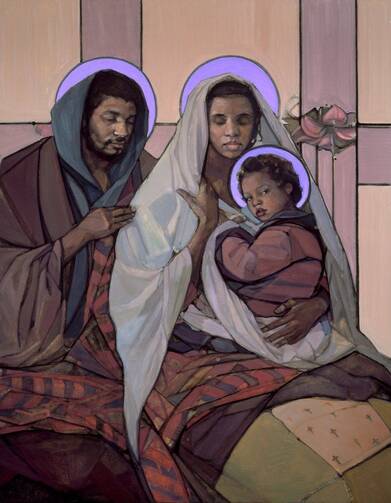 It is impossible to paint the Holy Family realistically. We do not know what they looked like. Their contemporaries left us no record of their appearance, and the four great theologians who wrote the Gospels were completely uninterested in the personal details that we long to know. Their minds were wholly set on what Jesus was, his significance. He was fully man but also fully God; he offered humanity the truth of his Father, and no externals could be allowed to clutter up the strong, deep lines of this message.

Artists, though, are forced to imagine for us the appearance of Jesus, Mary and Joseph, and over the centuries they have done so with great enthusiasm. Yet when we look at these pictures from the Middle Ages on, beautiful as they are, we may not realize their relative untruth. They all show us a fair-skinned Jesus with a fair-skinned mother. If St. Joseph is in the picture, he is hovering shyly in the background, usually aged, heavily bearded and fair. These are European families, usually rather aristocratic of aspect (except for poor Joseph), whereas the true Holy Family were Jewish peasants. The jolt many will feel when they look at Janet McKenzie’s painting “The Holy Family” forces us to recognize the vast stretches of time and culture that lie between us.

The people in McKenzie’s painting, which hangs in the chapel of Loyola School, a co-educational high school in New York City, are not Palestinian. She shows us a group of poor people who have the features of the African or perhaps the Mexican or Peruvian. Jesus, Mary and Joseph did not look like this. But this is a wonderful equivalence, forcing us to recognize both difference and similarity. The whole painting is a marvelous interplay of realism and symbolism. We are compelled to think again and to look twice. All three have dark skin, a flat nose, dark, short curled hair (though Mary’s is longer) and full lips.

It is as if the unknown reality of those first-century peasants has been transposed into another key, one to which we can genuinely respond. We are aware of their poverty. The couch on which Mary sits is patched, but its realism is set in an abstract context. Behind the family arises a geometrical patterning of lattice, palest pink in color and decorated with a flamboyant pink lily. The same touch of pink is visible behind Joseph’s shoulder. Where are they? It would seem they are in some symbolic setting, where the lattice subtly suggests the cross, a theme picked up in the larger of the patches on Mary’s couch. I am calling it a “couch” because its true definition is deliberately obscure. Mary is seated aslant, which inevitably recalls the side-saddled journeys that we know the family took together. The family vehicle, the donkey, seems to be present, even if only in subliminal fashion.

It is with these journeys that the Holy Family is most associated. On the first, when they traveled to Bethlehem, Jesus was only present in his mother’s womb, as secure and warm as he appears to us in the painting. But he will sit on her lap, as here, when they flee Herod and they travel to Egypt, and when they return after Herod’s death and live in Nazareth. Always Mary sits sidesaddle, holding the child to her heart, while Joseph either leads the donkey or walks beside her, a protecting presence.

When next we see the Holy Family, they are in Jerusalem, and we are about to have a demonstration of the impossibility of parents and children ever fully understanding one another. We know the story, one with which many parents will empathize. When they leave Jerusalem, Joseph thinks the child is with Mary, Mary thinks he is with Joseph, and it is only when they gather around the fire in the evening that they realize to their horror that Jesus is missing. It takes them three days of frantic search before they find him in the Temple, talking about his heavenly Father. Even in this closest and most loving of relationships, the parents are wounded at what seems their child’s thoughtlessness. (Thoughtlessness? Jesus, the Son of God? Yes, but a human Jesus who could make innocent mistakes.)

Mary reproaches him: “Did you not know your father and I have sought you, sorrowing?” The 12-year-old Jesus is astonished. How could they have sought him? Where could he have been except in the house of his heavenly Father?

No matter how deep the love, every human being is essentially a mystery. Here we see, for our comfort, Mary and Joseph accepting the disappointment that all parents must feel on realizing the unknowability of their child. Jesus, too, must experience the sadness of coming to terms with the truth of the human condition.

But if the Holy Family did not always understand one another, their mutual love and dependence was unshaken. McKenzie makes it beautifully clear that here is a family unit, three individuals bound together. We notice that both Mary and Joseph look not at us or at each other, but at Jesus. Highlighted by the glancing sunlight, Joseph’s body language makes it unmistakably clear that he is devoted, body and soul, to the support of his beautiful wife, resolute to share with her the extraordinary responsibility of raising the child Jesus to manhood. This was most definitely not a one-parent family.

McKenzie makes it beautifully clear that here is a family unit, three individuals bound together.

It took the church a long time to understand the significance of St. Joseph. In the very early church it was only Mary who was shown with Jesus, and she appeared very much as merely the means by which he comes to us. For centuries she was not seen as a person in her own right. To safeguard the doctrine of her virginity, St. Joseph was relegated even more to a background figure. Perhaps not until Murillo in the 17th century, devoted believer that he was, do we have an artist who understood that a family needs a father—a role model, to use modern jargon—and St. Joseph was the man God had especially picked for this.

We can believe this of McKenzie’s Joseph. We notice his sturdy shoulders, his lack of interest in anything but the mother and child. We see how gently and tenderly his broad workman’s hand touches Mary’s veil. (The veil itself, diaphanous and white, subtly recalls the bridal veil of a virgin.) Mary does not touch him—there is no physical contact—but there is emotional contact, beautifully understated. We see Joseph’s fingers on the veil, but not his thumb; we see Mary’s thumb but not her fingers. It is as if together they form a hand.

If Mary and Joseph have eyes only for Jesus, Jesus has eyes for us. Like any child who is completely secure in love, he looks out with an eager and innocent curiosity to an unknown world. Snuggled up in his warm jacket, he cannot imagine threats or danger. This, of course, is how it should be with every child, and a striking feature of this painting is how it appeals to the ordinary experience of a young family. The silent awe that Joseph feels is that of any young father faced with the wonder of raising a child. Mary’s immense dignity, her majestic inwardness, is surely that of a young mother holding her gift from God. The closeness and the sense of unexpressed devotion, which gives any family its stability, are here made visible. The artist wants us to see the Holy Family as writing large for us the holiness of the family, any family, our family.

The halos of the Holy Family, as McKenzie depicts them, are not the traditional gold, but rather a very pale purple that fits in unobtrusively with the subdued pinks and browns of the background. The dominant impression is of warmth, a deep and glowing inner radiance, at its brightest in the face of the small Jesus. Although McKenzie does not set herself to teach, still less to preach, this painting has a special relevance for our contemporary world. So many of our tragedies and discontents seem to stem from the decline of family life. All too often there is no father, or there is an absent father, and the child suffers from insecurity. Here we see the ideal: a man who loves his wife and her child and will devote himself to their protection; a woman who is secure in her husband’s affection and in their joint responsibility for her baby; a baby who feels completely safe. The family is holy.

Sister Wendy Beckett was an art historian and critic who rose to prominence on TV late in life producing content for the BBC while living at the Carmelite Monastery of Quidenham.