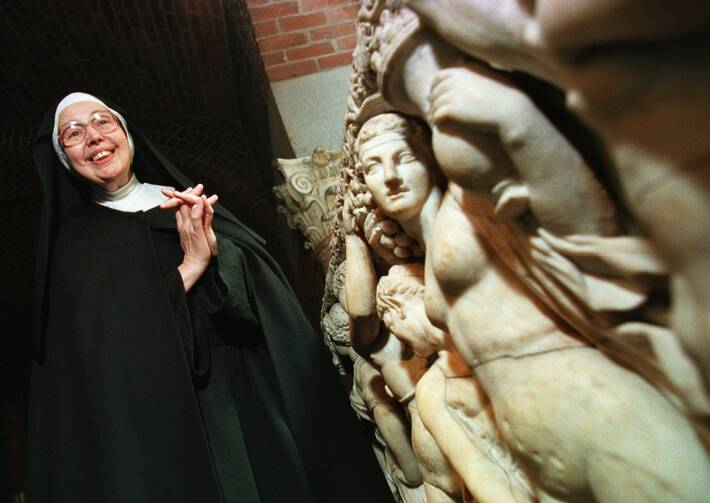 In this 1997 file photo, Sister Wendy Beckett, a Roman Catholic nun of the Sisters of Notre Dame, who lives in Colinton, England, and is a well-known art critic, stands near an unidentified sarcophagus at the Isabella Stewart Gardner Museum in Boston. The art historian and critic Sister Wendy Beckett died aged 88 on Wednesday Dec, 26, 2018. (AP Photo/Victoria Arocho, File)

LONDON (AP) — Sister Wendy Beckett, an art historian and critic who rose to prominence on TV late in life, has died. She was 88.

The Carmelite Monastery of Quidenham said Beckett died at the monastery Wednesday afternoon.

She was a sister of the Catholic Church who became prominent in the 1990s presenting BBC shows about art history.

Beckett's death was a huge loss for the art world. She was a brilliant art critic.

The BBC said it commissioned Beckett in 1991 to host a TV documentary on the National Gallery in London. She stood in front of the paintings dressed in a black nun's habit and discussed the paintings without a script or teleprompter.

"Sister Wendy had a unique presentation style, a deep knowledge of and passion for the arts," BBC director of arts Jonty Claypole said. "She was a hugely popular BBC presenter and will be fondly remembered by us all."

Close friend Xinran Xue said Beckett's death was "a huge loss for the art world. She was a brilliant art critic."

Beckett was born in South Africa and raised in Scotland. She joined a convent at 16 and started studying fine art in the 1980s.

She taught in Cape Town, South Africa, and Liverpool in northern England.

Sister Wendy was great. We never missed her in our house. The juxtaposition of this diminutive figure with articulate and enlightening commentary on fine art never grew old. She and Michelangelo are no doubt having an in depth eternal discussion about the latter’s art work in the Sistine Chapel.