Why you should keep reading the bleak news this Christmas 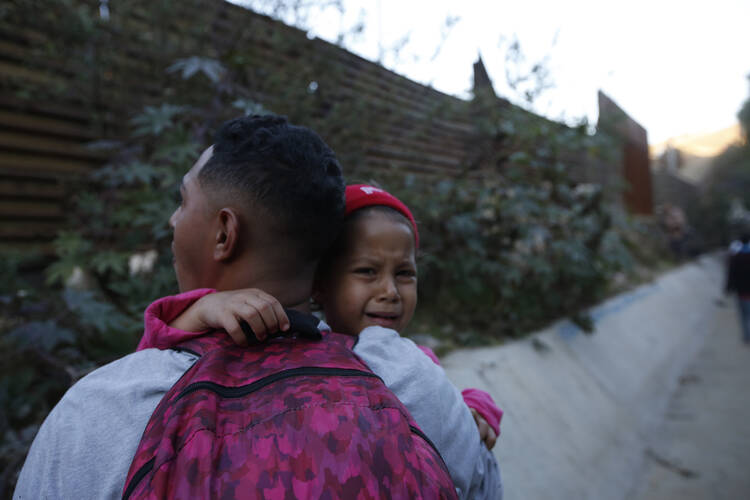 There has been little holiday cheer in the headlines recently. Chaos reigns in Washington, D.C., financial markets wobble, and our foreign policy appears to be unraveling. Families have been left homeless by wildfires and shattered by opioids. Attacks on racial and religious minorities are on the rise. A government shutdown over a border wall is set to ruin many an American family’s Christmas. And misery continues to be compounded at our border, with the recent death of a 7-year-old girl named Jakelin illustrating the human cost of our refusal to build a more just immigration system.

If you are following all that, it can be hard to get into the Christmas spirit. It is naturally tempting to simply unplug and turn off the news app. Isn’t the season about focusing on quality time with friends and family, our greatest worry being some last-minute shopping and jockeying for a good seat at Christmas Mass?

We see the echoes of the Nativity story all around us.

But if one reads the Bible one sees the Nativity story is actually pretty bleak. For all the shepherds, angels and wise foreigners, there is King Herod and the needy being turned away. It is a story of a miracle but also a story of refugees, and it ends with the massacre of innocent children. It is not a happy tale. It is a hopeful one, bringing the promise of a savior. But for the people who lived and breathed that holy night in Bethlehem, there was no escaping the horrors of their world.

And so this Christmas, maybe we shouldn’t try to escape that horror either. We see the echoes of the Nativity story all around us. Who can read the news and not find evidence of modern Herods? There are families at the border, asking for a place to stay and being told to go away. Today, the three wise men from the East bearing gifts would be stopped at our airports. And was not the death of 7-year-old Jakelin a tragedy equal to any of the children lost in the massacre of the innocents? Are not the migrant children in government cages evidence of cruelty almost as twisted?

Even shepherds are having a hard time. When one thinks of shepherds as nomadic agricultural workers, people on the margins whose hard work propped up the economy, today’s migrant farmworkers come to mind. In California, these farmworkers were forced to work through the smoke of our recent wildfires. Volunteers offering smoke masks to workers in the fields were even turned away. Meanwhile, a conflict between literal shepherds and their farmer neighbors has claimed lives on both sides in Nigeria. And, of course, the metaphorical shepherds of the Catholic Church have themselves been responsible for immense anger and grief among their flocks.

If Jesus was born today, where might we find him? I would say Tijuana would be a good place to start looking.

If Jesus was born today, where might we find him? I would say Tijuana would be a good place to start looking. As baby Jesus fled to Egypt in his mother’s arms, so now are babies fleeing to the United States in the arms of modern-day Marias and Joses. Folks in Tijuana and San Diego who celebrate las posadas at the U.S.-Mexico border wall have the right idea. The group representing Maria and Jose sing from the Mexican side to be let in. The group representing the innkeepers sing from the U.S. side, their scripted refusal reinforced by the imposing barrier between them. There will sadly be no bi-national sharing of tamales at the end of this ritual.

Is the Christmas story too good to be true?
Terrance Klein

Does all this knowledge take away from Christmas? Not at all. It is rather a reminder of why we need it in the first place. Christmas is about the arrival of hope, which is needed most precisely when things seem to be at their darkest. The state of the world today is as urgent and horrific as it has ever been. The arrival of a savior is as relevant today as it was on the first Christmas. We should not shy away from that. This is not a holiday to be comfortable; Jose, Maria and Jesús were not comfortable in the manger. This is a holiday for those of us who are as comfortable as the innkeeper to notice all those who may be knocking on our doors.

One look at the news should remind us: It is not the most wonderful time of the year. But there is plenty of reason for the season.

Antonio De Loera-Brust is a first-generation Mexican-American writer and filmmaker from Davis, Calif. He is a graduate of Loyola Marymount University in Los Angeles and a former Joseph A. O’Hare S.J. fellow at America.

There is plenty of good news out there. One just cannot read limited biased sources.

Three things: First The migrants at our southern border are fleeing Catholic countries and Catholic social policy that has created the violence and poverty. Are those who encourage the movement the ones to blame for the bad things that happen to them when they leave? Second, the world is 10 times more dense in terms of people than during biblical times. Migration created wars even back then with much lower population density. Third Emotional appeals such as the photo and child who died appeal to our feelings. Evidence and logic appeal to our intellectual being.

I'm not sure that Catholic social teachings create violence and poverty. Perhaps, to the extent that they are socialist in nature, they do cause suffering. Unintended consequences, I suppose. I am always amazed at how articles like this never even try to examine the root cause of the "migration" in a serious or satisfactory way. Surely Latin american countries are not all beyond help, are they? Is there nothing that can be done to help the poor citizens of these countries WHERE THEY ARE? Is migration -- leaving --the only thing to be done? Have any OTHER actions been tried? As you indicate in your first point, J Cosgrove, let's place blame WHERE IT BELONGS.

The root cause of Latin American poverty which begets violence is a class system that the Church has endorsed for centuries. This political system which the Church endorsed is not in any moral teaching of the Church. This system sets up social patterns that keep people from advancing. The Church's answer now is mainly political and distribution of wealth. The only thing that released the world from poverty is freedom of the people, It started in the late 1600's in England and blossomed there and in the English speaking colonies in the 1700's. It spread to most of Western Europe in the 1800's but relatively little to Latin America. Freedom, private property, Catholic morality is answer.

The author asks whether the death of 7-year-old Jakelin was not a tragedy equal to any of the children lost in the massacre of the innocents.
Does any reader judge that the tragedy of Jakelin equals the tragedy of a child who died in the massacre of the innocents? If there is any, please, give reason for your judgment, which seems perverse. My mind and heart are open.

I can think of multiple points of convergence. The first is of the essence of Catholic moral teaching: the sanctity of human life. The tragic death of an innocent child is an abomination to God whether at the hand of Herod’s soldiers or international politics. Second, the Gospel of Matthew illustrates the unity of the newborn Jesus—himself a political refugee of Herod’s megalomania—with the plight of countless peoples of every age who suffer wholesale disruption at the hands of human whims of ill-conceived and often sinful motivation. And finally, we are indebted to the insight of the biblical scholar Father Raymond Brown of a generation ago who reminded us that the two Infancy narratives of Matthew and Luke are, in essence, predictive stories of Christ’s passion. Christ’s saving death is a universal act for all peoples in all times. His saving intent knows no bounds, certainly none of race and time. His words, if taken seriously, would destroy the cruelty of sin whether on the banks of the Jordan or the flatlands of the Americas. If my judgment seems perverse, so be it. I’ll take my chances.

The innocents and Jakelin were all innocent. They died because of state policies.

P.S. "Dear brothers and sisters, all walls fall. All of them. Do not be fooled." - Pope Francis

This one is for you, `Mr. Cosgrove. Feliz Navidad. https://youtu.be/rgK-1mpSljI

All my hexes live in Texas

I don't think all walls WILL fall.

Have none of you raised children, you who persist in calling them innocent?
I have six of my own still alive and was the eldest of eight. They are all people and none of them is innocent including myself.

Is there any awareness of the mortality rate of females of age 7 in Guatamala?
It is about 15 times lower than the infant mortality rate of refugees!
What about the measure of the additional risk by journeying through several sovereign states seeking riches?
Nature red in tooth and claw and human original sin produces deaths like those of Jakelin. Her death is being used by cynics, disingenuous armchair pontiffs telling others how they should behave.

talk about fake news!--bedecked with obligatory little child photo. As for the death of 7yr old Jakelin in border custody, if you read the factual story, she died because her father refused to take her back to hospital when her symptoms worsened, then by the time they did return it was too late. She died of a medical condition, NOT from being in custody. As for the migrants they are there at the border by choice, having already refused offers of asylum and employment by Mexico. It must be nice to write a romantic fantasy like this (and find editors at America who publish it!) while we have plenty of homeless people in Paradise CA with no place to spend Christmas either. So enough awready with the emotional manipulation that is shamelessly practised in fairy tales like this--lets talk about real problems of homelessness and loss inside USA and how we devote our limited resources to domestic problems before we become a field station for the world.

I would have thought that a more likely place - still close to home, would be Caracas, Venezuela, where there truly is a despotic ruler and huge migration due to people suffering from starvation. Christmas is a promise for Hop. At home we should hope that the hate subsides in our government so that it is able to continue to govern for all and enact laws that are fair for all our citizens.