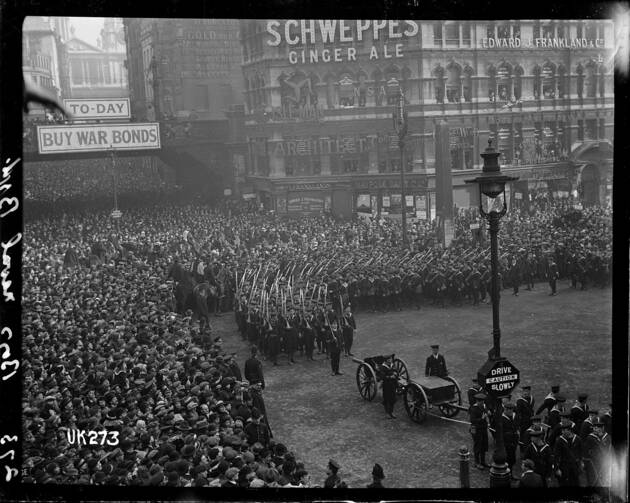 A naval contingent marching in London at the end of World War I, 1918. Dry plate glass negative (Wikimedia Commons)

In the issue of Dec. 21, 1918, shortly after the end of World War I, the editors of America prayed that the Christmas celebration of that year would usher in lasting world peace. Our forebears’ prayer, unanswered in their lifetimes, is still our hope today. (The text here is a shortened version of the original editorial and retains the vocabulary, capitalization of the original.)

For He was given to us as one of ourselves, as one to whom we might always look as our Elder Brother, our intercessor with our common Father in heaven. Mary and Joseph could find no home for His birthplace, but only a stable. He did not come to us like a child of the poor, for even the poor have homes, but like a little Outcast. No candle is there and no fire in that rude hut, and her little One shivers in the cold.

But Mary wraps Him in swaddling clothes and before she lays Him in the manger, holds Him to her loving breast. For if He is God, is she not His Mother? He falls asleep, soothed to rest by the sound of her voice, comforted by the caress of her gentle hands. With unconcerned eyes the beasts near the manger look on. Soon our forefathers in faith will kneel before the sleeping Child, to adore Him as their God, their Saviour. Soon the song of the Angels, with its glorious promise of peace to men of good-will, will announce the coming of the King. But now all is silence, darkness.

For four years, the world was in arms, nation against nation, brother against brother, and the Prince of Peace seemed forgotten.

But God gave His Gift to a heedless world, and in the giving a new epoch began. By His coming Jesus Christ transformed the face of the earth. He forged, first of all, an unbreakable bond, uniting all men as brethren. He is truly of our race and nation; He has taken to Himself our frame, our flesh, our nature; He has become like to us in all things, save only sin. Made the first-born of many brethren in the Incarnation, He elevated the natural kinship of all in Adam to a relation that is sacred. As brothers, we are equals; as brothers, we ought, in St. Paul’s words, to prevent one another in charity; and because the Christ Child, God’s Christmas Gift to the world, is our true Brother, we are all, in His intention, children of God and heirs of Heaven.

For four years, the world was in arms, nation against nation, brother against brother, and the Prince of Peace seemed forgotten, with all that He came to teach. Now that the cannons are silent, after those years of carnage, men are weary and hearts are softened. Today, the whole world is at peace, as it was when the Christ Child was born in Bethlehem. May Christmas, 1918, mark the beginning of a new era in which the peace and love borne to the world by the baby hands of the Child of Bethlehem, shall be firmly established in the hearts of all men.