The Editors: What we owe America’s farmworkers 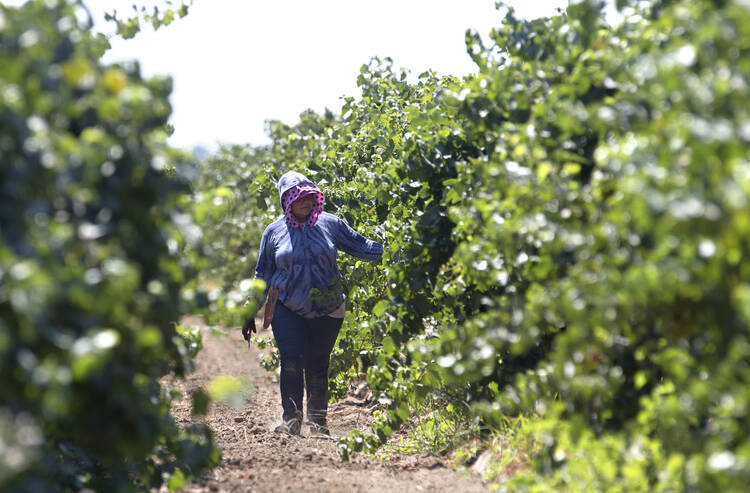 A farm worker trims grape vines in a vineyard in Clarksburg, Calif. In a unanimous ruling Monday, Nov. 27, 2017, the high court in California upheld a law that aims to get labor contracts for farmworkers whose unions and employers do not agree on wages and other working conditions. (AP Photo/Rich Pedroncelli, File)

U.S. agriculture is facing a silent crisis. The Trump administration’s crackdown on undocumented immigrants has sown fear among farmworker communities, making workers harder to find than ever. Farm owners across the country are anxious about meeting their labor needs. Millions of dollars worth of crops are at the risk of rotting.

The present labor shortage reveals U.S. society’s dependence on farmworkers. The hands that pick what Americans eat are hands the country relies on. And with almost no native-born Americans willing to do the job, Latino immigrants have become indispensable. Even in the midst of the severe fires in California, farmworkers could not stop working lest harvests be lost.

The hands that pick what Americans eat are hands the country relies on.

Yet the nation’s collective reliance on farmworkers is not reflected in the way they are treated. In California, which produces two-thirds of the nation’s fruits, rates of food insecurity for farmworkers and their families range from 40 percent to 70 percent. Farmworkers’ low wages directly contribute to growers’ profit, but farmworkers regularly cannot afford to buy the food they pick.

Working conditions for farmworkers can be harsh. Even under the best conditions, a day of work is one of hard manual labor, with long hours and often high temperatures. The Trump administration’s Environmental Protection Agency has approved the use of a pesticide known to be harmful to human beings. Farmworkers have already gotten sick on the job as a result.

The nation’s collective reliance on farmworkers is not reflected in the way they are treated.

Society’s failures toward farmworkers extend beyond poor working conditions. The children of migrant farmworkers endure seasonal displacement that can make staying in school difficult. Social mobility is weak for those born into farmworker communities, creating a generational cycle of poverty. State and local governments resist attempts by farmworkers to organize for greater protections. And despite being dependent on farmworker labor, many local communities are openly hostile to migrant workers.

It does not have to be this way. In 2016, California recognized the right of farmworkers to equal overtime pay. In Florida, the Coalition of Immokalee Workers secured commitments from fast-food chains to buy only from agricultural sources that meet improved standards on pay and work conditions. That model of direct pressure on major companies is spreading. In Vermont, immigrant dairy workers just claimed victory in an agreement with the ice cream maker Ben and Jerry’s.

It is curious that so many Americans care about eating ethically (vegan, vegetarian, organic or free range) but do not think as much about the poverty and exploitation among the largely Latino farmworkers who are making their meals possible. Labeling programs, including the Equitable Food Initiative label, the Food Justice Certified label and the United Farm Workers Union label, support the fair treatment of farmworkers, but there is little indication that products carrying those labels are sought out by consumers.

At 87, Ethel Kennedy is still ready to fight for justice
Matt Malone, S.J.

The United States must do more to treat farmworkers with justice. A huge step would be to lift the threat of deportation that looms over many farmworkers by passing comprehensive immigration reform that recognizes both the need for labor in the United States and those laborers’ right to dignity and opportunity. Rectifying the injustice of the 1930s—when farmworkers were excluded from new federal labor standards—and finally offering farmworkers the same labor protections as other workers is also necessary. Farmwork, like all work, carries an inherent dignity and should be a viable path for immigrant families into the American middle class.

The common thread in all the challenges farmworkers face is a lack of urgency. Perhaps every time Americans say grace before a meal, they could spare a moment to remember those who make that meal possible.

Father Malone
I certainly agree that the migrant farm workers must and should be treated better. However you seem to ignore the inherent contradiction in that goal and the Social Justice movement for open borders, limits on deportation, etc.
The supply of labor will eventually control the wages paid to labor and the Social Justice goals if met would provide a supply of labor that will inevitably exceed demand and result in lower wages.
One need only follow the movement of foreign sourcing for overseas labor over the past 30 years to see the production of goods move from country to country as the labor pool tightened up in the then current country of production .....China and India, to Vietnam, to Bangladesh,to Indonesia etc.
Further you fail to note that the Social Justice safety nets do themselves provide more benefits to "Poor Americans" than the working in the food industries and provide a disincentive to take those jobs.
Deportation of "undocumented workers " would in fact result in a quick raise in wages for documented workers.
State and Federal wage laws/decrees will never stop "the underground cash labor market" just as those same laws have failed to stop the illegal sale of drugs etc.

It used to be that children in rural areas helped pick crops and do the work now done by immigrant laborers. As farms consolidated and the percentage of farmers in the population dropped, so did the availability of children available to do the work.

We treat immigrant workers poorly and are often blind to that fact. That immigrants have a situation that has deteriorated since the current administration took office is hardly a surprise, given the hatred expressed toward immigrants by the current occupant of the White House. If food prices go up because there is insufficient labor to pick the crops, that will affect the poor more than the rich. More of the "pro-life" GOP policies in action.

You fail to mention in this story how many of these farm workers that are here illegally are collecting benefits at the expense of the taxpayers of California, of which I am one. While I certainly appreciate the back breaking work they do, I also am originally from NJ where migrant workers were routinely brought in from early April thru October/November to pick crops, work fields, etc. That program worked. When Reagan offered amnesty in 1986 to those here illegally then it was done with the proviso that border security was the second part of the equation. That never happened. That lack of security resulted in the current situation whereby we have upwards of 11-20-30 million illegal aliens living in this country today, some that never, ever got legalized in 1986. That cannot happen again. I agree that we must have comprehensive immigration reform. That must first start with a better constructed continuous wall along the CA, AZ, NM and TX border. Once that’s done the same must be applied to our northern border with Canada as well. Ignoring either border will lead to an influx. Once that is secure then we can think about how best to deal with those here illegally. Anything short of outright immediate border security will lead to a further influx of illegal immigration to our country. Don’t get me started on chain migration either. That has to be handled as well. I’ve worked as an ER/trauma nurse for 17 yrs and I see the effects that illegal immigration has on a daily basis from people ignoring illness until it too late to those who literally use the ER for their own doctors office because they know even if we bill them they will still be seen even if they don’t pay. It’s a vicious cycle. However the cost here in LA County for illegal medical care and benefits (yes they do get those with children born here such as AFDC, SNAP, WIC, Medi-Cal, GR (General Relief or welfare) is at $5.2 billion per year. That is one county out of 58 in CA. Think about that. English is not the primary language spoken at any social service office here. Again this is because the benefits are easily given and most of those claiming them know it. It has to stop or the laws have to change but something has to give. Yes you talk about generational poverty but not what leads to it. What programs are available that take people off these social safety nets? Because that should be the real focus. It’s expensive to live here in LA County and across CA as a whole. Why do we want to import more poor people to a situation that is untenable for them?