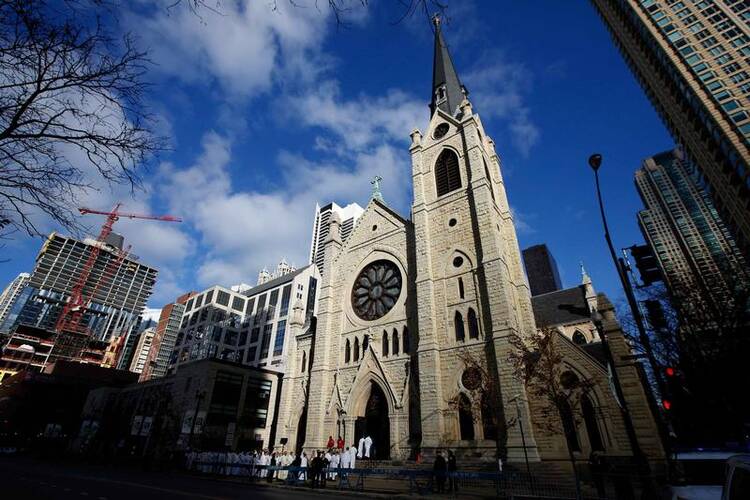 Ms. Madigan’s office says its preliminary findings have revealed that the Archdiocese of Chicago and the dioceses of Belleville, Joliet, Peoria, Rockford and Springfield have done an inadequate job of investigating allegations, and in some cases did not investigate them at all or notify state child welfare workers of the allegations.

“Because I know that the Church has too often ignored survivors of clergy sexual assault, I want to share the initial findings from our work,” Ms. Madigan said in a statement published on her office’s website. “While the findings are preliminary, they demonstrate the need for and importance of continuing this investigation.”

Illinois Attorney General Lisa Madigan: “Because I know that the Church has too often ignored survivors of clergy sexual assault, I want to share the initial findings from our work.”

The report does not include details on when or where the additional allegations were made, but a spokeswoman said that the allegations go back decades. Her statement comes amid a renewed national outcry over allegations of sexual abuse of children by Catholic priests.

Ms. Madigan began her investigation in August after the release of a Pennsylvania grand jury report that revealed the shocking history and scope of clergy child sexual abuse in that state. Since then, Ms. Madigan and her office have spoken or met with bishops, lawyers and diocesan representatives from the Archdiocese of Chicago and the state’s five dioceses. Her office also has reviewed thousands of pages of documents, including diocesan procedures for receiving and investigating allegations of abuse.

“I want to express again the profound regret of the whole church for our failures to address the scourge of clerical sexual abuse,” declared Cardinal Blase J. Cupich, archbishop of Chicago, in a statement. “It is the courage of victim-survivors that has shed purifying light on this dark chapter in church history. Their bravery spurred my predecessor Cardinal Joseph Bernardin to establish an archdiocesan Special Commission in 1991 to examine this terrible crisis, and to develop a robust set of procedures to protect young people from predators and to establish supportive services for victim-survivors and their families.”

“Those efforts continue today in the Archdiocese of Chicago’s Office for the Protection of Children and Youth, which is staffed by lay professionals with backgrounds in investigative services, education, social work, and therapeutic services,” Archbishop Cupich continued. “They work daily to protect and heal. There can be no doubt about the constant need to strengthen our culture of healing, protection, and accountability. While the vast majority of abuses took place decades ago, many victim-survivors continue to live with this unimaginable pain.”

[This story will be updated as more details emerge.]

There needs to be a Grand Jury investigation with subpoena power into every diocese in every state and set up a statewide hotline for victims to call. All dioceses are run the same just like those in Pennsylvania and all dioceses have a "secret archives". Those who enable and cover up sex crimes need to be held accountable. Until that happens children are not safe within this system.

Though there are many good, faithful priests, it is also true that sexual abuse and misbehavior has been embedded in the church, and covered up by the hierarchy for CENTURIES. What is different is that this is coming out publicly now. Which is a good thing.
I am in my late seventies. I have lived in Europe, Africa and the US, and from the time I was an 8-year-old child, I have known (in all 3 places) about abusive priests one should stay away from, and priests who had affairs and led a double life... This is old news (though it is still upsetting). What is new is that now, things are finally getting addressed. Maybe there will be change. This is a huge culture change in the Church, and also a shift in power taking the laity more into account. So maybe we should hope rather than despair.

This Survivor’s skin crawls when people claim that “this is old news”. This news is never old for victim-survivors. It never goes away. Some of us have been suffering for DECADES. Me personally, for almost 50 years. Please re-think your attitude. Thank you. Merry Christmas.

Hold on to your hats and your hearts, Catholic Faithful. The next (and last?) shoe to drop soon about the Catholic Clergy Abuse Crisis is that NUNS are abusers, too. Are and were. It goes back decades. And the cover ups go back that far, as well. Get ready for this news. Get ready for it to get a whole lot worse before it maybe gets better.

Sheila - I have personal and credible knowledge about how abusive nuns can be. This includes ethnic discrimination, hate-filled remarks, and highly irresponsible and outrageous guidance to high school honor students in the 1950s and 1960s. In today's environment, these nuns would be fired or removed from their teaching positions.

I too yearn for justice in this crime committed by Catholics, lay and clergy. But, I fear that law enforcement will not be that effective, especially since their track record in actually getting convictions has been so poor to date, even since the Church adopted a zero policy (the Dallas Charter). The Illinois AG has not released sufficient details of these allegations for us to know if most are historical and what her definition of substantiated or credible is. From the article, I think she lumps all allegations into the one bucket, mixing the possibly falsely accused with the probably guilty. In my opinion, the Church should have a standing Catholic National Review Board that gets every allegation against bishop, priest and lay person (irrespective of credibility) and makes a preliminary (<1 month) determination of credibility, before presenting their preliminary data to the police, under confidentiality (before releasing names to the public). Three very recent allegations were all believed to be substantial despite very different circumstances and all were quickly determined to be false by law enforcement (linked below). The D.A.s criticized the Church for going public with the names and harming their reputations. When one reads the details, a fair-minded person should see how difficult this is:
1. https://www.pottsmerc.com/news/berks-county-d-a-says-priest-wrongly-acc…
"“It is unfortunate that the accusation of child sexual abuse against Rev. Gillis was made public by the Diocese of Orlando before the outcome of this investigation could be determined. These types of investigations are very sensitive in nature. Many times when the accused is publicly mentioned prematurely, without any factual basis, it can compromise an investigation," [District Attorney] Adams said.
2. https://gloria.tv/article/pJwJqrUtunjp1iLgAtE1Eh2v9 "Fort Wayne-South Bend Bishop Kevin Rhoades, 60, is not guilty of any wrongdoing regarding an alleged abuse of J.T. who died in 1996, a Pennsylvania district attorney has concluded on September 13. The district attorney noticed that unnecessary harm was done to the bishop's reputation by [illegally] leaking accusations to the press."
3. http://www.ncregister.com/daily-news/false-accusations-of-sexual-abuse-…