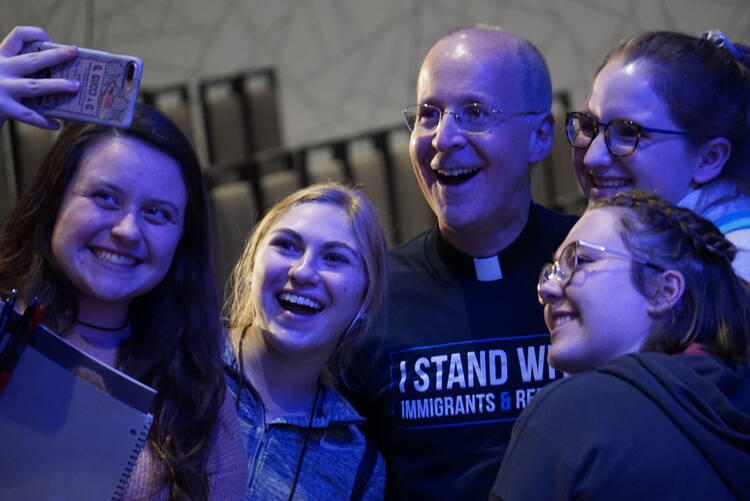 A group of boys from Brophy College Preparatory in Phoenix, Ariz., explain how they led their school through a contentious conversation that broke out after President Donald Trump announced the suspension of DACA (Deferred Action for Early Childhood Arrivals). When the consequences of this action became clear students launched the “Dream On” campaign, advocating for the needs of their undocumented classmates.

9. The Peace Poets sing about solidarity:

The Peace Poets, a self described family “born of Hip Hop, heart and hope,” perform “I Have Not Come Here Alone,” an anthem of solidarity. They have performed across the nation as part of a reemergence of protest culture in social justice movements. They believe in the joy of celebration and the healing power of connection, bringing their art and energy to the Ignatian Family.

8. A poem on power in America

The Last Emcee (Enmanuel Candelario) of the Peace Poets performs his original piece “Power Concedes” live in front of an audience of more than 2000 people.

The Ignatian Family Teach-In for Justice originally emerged out of the protests at the School of the Americas in Fort Benning, Ga. (now known Western Hemisphere Institute for Security Cooperation). The prayer for the Jesuit Martyrs serves as a centerpiece for the Teach-In each year, reminding us all that “the blood of the martyrs is the seed of the church.”

6. Sasha Williams tells us why #Blackgirlslivesmatter

Sasha Williams shared the story of how she created the “She could have been one of us” campaign, in response to the murder of her neighbor, Nia Wilson, at the hands of a white supremacist in Oakland, Calif. Williams and her campaign work to elevate the voices of young girls of color, boldly proclaiming #blackgirlslivesmatter.

5.  Bishop George Murry, S.J. responds to a history of racism

Bishop George Murry, S.J. of the Diocese of Youngstown, led the Ignatian Family in a frank conversation about racism and anti-blackness in the history of the United States and our church. Interested in how the church is responding to racism today? Check out Associate Editor Olga Segura’s coverage of the U.S. bishop’s new anti-racism letter.

4. Loyola Maryland rises in the aftermath of Freddie Gray’s death

Three women from Loyola University Maryland shared their experience of advocacy in the wake of the death of Freddie Gray at the hands of Baltimore police, creating the movement Loyola Rising. They share ways in which communities, especially those that are predominantly white, can have constructive conversations about race, police brutality and social justice.

In one particularly popular breakout session, Father James Martin shared his ten tips for welcoming L.G.B.T. people into the church. His voice of pastoral welcome and solidarity moved the crowd of predominantly young people eager to hear this message.

2. A mother reflects on the separation of families at the border

Nichole Flores, a contributor to America Magazine, discusses immigration in her highly personal, passionate, talk given at the Teach-in. She discusses the birth of her son Roberto—accompanied by adorably cute baby photos—and the new perspective she has on life, joy and social justice. Her reflection on motherhood and the separation of migrant families at the U.S.-Mexico border is the deeply moving. Keep an eye out for her upcoming feature in America on Latino parishes.

1. A prayer for a church in crisis

Christine Boyle, director of campus ministry at St. Peter’s University, led the Ignatian Family in a prayer for the church in a time of crisis, sharing her reflections on the sexual abuse crisis and the righteous anger exemplified by Jesus in the Gospels.