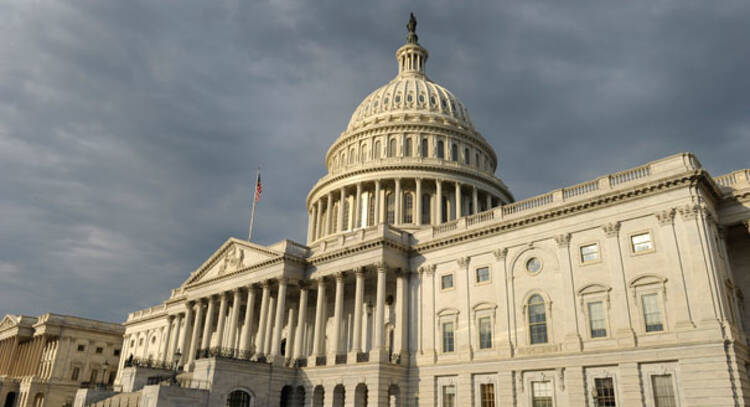 In the days before the midterm elections, the weather in Washington, D.C., was muggy and overcast, like the national mood. (The humidity made moving around feel like passing through walls of sludge.) A city anticipating the high drama of Election Day sat eerily quiet. Like elsewhere in the country, the capital is spangled with lawn signs and campaign posters (“Write In Butler for Mayor 2018”) and negative TV advertisements.

In the twilight of the 2018 campaign season, you would be hard pressed to find many grinning politicos or jabbering talking heads urging other leaders and American voters to reject the horse race that is electoral politics, a stew of “likability” and “electability” and adversarial posturing. But at the Ignatian Family Teach-In for Justice in Northern Virginia’s Crystal City, a different kind of congress assembled, where efforts to “grow in compassion for each person beside us” and to act with an “intention of peace and curiosity” were par for the course.

This year, the forthcoming election hovered over the Ignatian Family Teach-In, with conversations about immigration and racism predominating.

From Nov. 3 to Nov. 5, the Teach-In—the annual social-justice conference of Catholic high schools, colleges and universities, and parishes sponsored by the Ignatian Solidarity Network—brought some 2,000 people together. This year, the forthcoming election hovered over the event, with conversations about immigration and racism predominating. Attendees offered critical optimism and steely-eyed determination in the face of a jumpy, downcast, bitterly partisan political ecosystem.

On Nov. 3, Bishop George V. Murry, S.J., appealed to the common good, deploring racism and calling for resolve in combating it.

He also pointed out the complex intertwinement of systemic and individual racism, and said Americans must “break down the walls created by the evil of racism, whether this evil is displayed publicly for all to see or deeply buried in the recesses of our hearts.”

When juxtaposed against the Teach-In, the closing weeks of the campaign look like an inversion of that call to solidarity.

Early on Nov. 4, Nichole Flores, an assistant professor of religious studies at the University of Virginia, gave an address that conceived of American civic life in filial terms. “We have moral obligations to care for one another as family,” she said. “Imagining the common good in terms of family can help us to enact a just solidarity in our time.”

“I read in horror of children—even children of nursing age—removed from their family and incarcerated,” she said, referring to the zero-tolerance U.S. immigration policy implemented in June. “And as I looked at my own nursing baby, my eyes filled with tears.”

When juxtaposed against the Teach-In, the closing weeks of the campaign—marked by bomb scares, a massacre at a synagogue and a hostile response to the group of immigrants marching from Central America toward the U.S.-Mexico border—look like an inversion of that call to solidarity.

Over the weekend, the political parties communicated their closing arguments online and at rallies across the country. President Trump has tweeted about a flurry of topics, foremost among them immigration, a fixture of his presidency and the campaign. “If you want to protect criminal aliens – VOTE DEMOCRAT,” he wrote. “If you want to protect Law-Abiding Americans – VOTE REPUBLICAN!”

The American family is locked in a feud whose end is nowhere in sight.

The Teach-In, and particularly Ms. Flores, asked something different of the attendees on the eve of an electoral showdown. It was a question that often goes unconsidered: how would things be different if people—namely government officials and others in positions of power—cared for the downtrodden as if they were family? How can familial love transform politics? How does power corrupt or extinguish this possibility, and what are Americans to do about that?

The election may push to the fore new legislative agendas and invigorate constituencies. But it will not yield answers to the questions posed by Ms. Flores, Bishop Murry and the Teach-In participants, because this family is locked in a feud—a feud over what we owe each other—whose end is nowhere in sight.