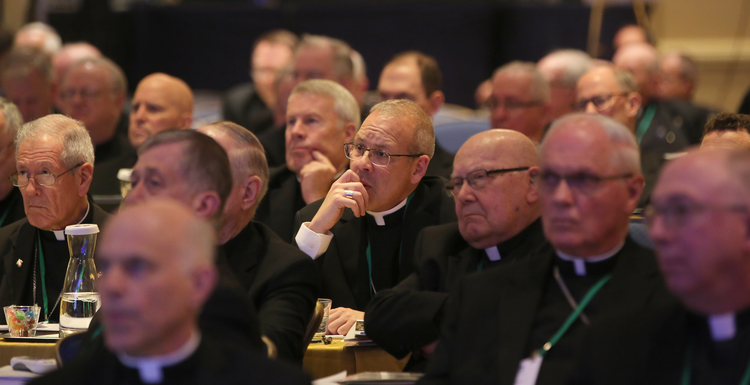 Bishops listen to a speaker on Nov. 14 at the fall general assembly of the U.S. Conference of Catholic Bishops in Baltimore. (CNS photo/Bob Roller)

The Vatican’s decision this week to interrupt the vote on new sex abuse protocols confounded bishops and parishioners all over the United States. America’s Vatican correspondent Gerard O’Connell has some ideas about the reasons behind the controversial, 11th-hour intervention from Rome at the U.S. bishops’ November meeting. The tardiness of the U.S. bishops in delivering their proposals to the Vatican in the first place probably contributed to the decision, he says.

The Holy See does not respond well to time constraints and, according to Italian media reports, did not receive the proposals on accountability for bishops until just days before the meeting was scheduled to begin. “If you don't give people time enough to study the proposal, this is a problem,” said Mr. O’Connell, discussing the controversy on America Media’s “Inside the Vatican” podcast.

Vatican correspondent Gerard O’Connell has some ideas about the reasons behind the controversial, 11th-hour intervention from Rome at the U.S. bishops’ November meeting.

The Vatican may also feel it best to hear from other bishops’ conferences around the world, which will also soon be deliberating on the issue, rather than accepting and implicitly endorsing whatever proposals emerged from among U.S. bishops this month, according to Mr. O’Connell. Vatican officials explained that they wished to wait on the outcome of an unprecedented meeting in February that will bring the heads of the world’s bishops’ conferences to Rome to discuss the abuse crisis, he added.

“I think what the Vatican really didn’t want was some country to have decided, ‘This is the way to go,’ and coming [to the meeting in February] with a kind of decision already made without readiness to listen to other parts of the world,” he said.

This would allow U.S.C.C.B. president Cardinal Daniel DiNardo to remain open to new ideas he might hear in February and then adapt the U.S. proposals on protocol that would, among other things, govern bishops’ accountability and lay review of allegations against bishops.

“Once Cardinal DiNardo comes to Rome and sits with the other presidents of bishops’ conferences from around the world...he may well see, ‘Well, maybe that’s an aspect we hadn’t thought of,’” Mr. O’Connell said. “And so I think that if he comes with knowing the mind of the conference...but without having signed, sealed and delivered the protocol for the way ahead...maybe you find that he’s in a better position when he goes back to lead the conference in its decision-making.”

Suggestions that the Vatican’s intervention and an apparent disregard about how it might be perceived in the United States among a Catholic audience exhausted by the abuse scandals misread the circumstances, Mr. O’Connell said. Dealing with the sex abuse crisis is “an urgent issue in many countries, not just the United States,” he said.

“And that’s also why [on Nov. 13] he has brought in the church's top expert on the abuse question, Archbishop [Charles] Scicluna from Malta, and now appointed him to a joint number two position in the Congregation for the Doctrine of the Faith, giving him, people say here, enormous authority and ability to lead preparation for the February meeting but also to lead the church’s efforts to combat the abuse.”

Mr. O’Connell suggests that the Vatican is also concerned that a too-hasty response to the summer’s U.S. scandals by U.S. bishops eager to show they have done something on the abuse problem and their own lack of accountability may, in the end, backfire on the global church.

“It’s important not to rush,” he said. “If you remember when the American cardinals came to Rome, called by John Paul II in 2002 at the height of Boston’s scandal...there was a lot of rushing at the end to try and get a final agreement.” But “these are important decisions, and it’s important not to get them wrong.”

“It’s clear now that the Dallas Charter was deficient,” Mr. O’Connell said. “It dealt with priests. It didn’t deal with the bishops. If they’d spent a little more time, maybe they would have reflected more fully on this.”

Click here to listen to the full audio interview.

It's been about 16 years since Cardinal Law had to resign for covering up abuse, fled to Rome, and was promoted instead of punished by the Vatican. The Vatican has had ample time to construct a universal stance on sex abuse .... it doesn't want to do that. I hope civil authorities across the glove do the job that the Vatican won't. Meanwhile the pope and his predecessor remain immune from prosecution in their own little country.

However difficult the American situation re: the sexual abuse of minors, however much this situation clamors for remedy, the situation cannot be allowed to obscure that, in sex abuse, we Catholics have a problem that is embedded in the Church Universal, a problem that best be addressed at this level via process. Otherwise, we risk getting our Catholic response incomplete (viz. the Dallas Charter, which overlooked bishops). (Btw, it may take the influence of the non-western heads of episcopal conferences to point out to the western heads that the sexual abuse has a manifestly homosexual materiality to it.)

Prayers for the success—the universal success—of the February meeting.

Words of wisdom from the other side of the world:
https://international.la-croix.com/news/the-catholic-churchs-one-foundation/8855?utm_campaign=LaCroixDaily&utm_medium=email&utm_source=(434)%20AllSubscri

Indeed! And this from Robert Mickens on "Why Pope Francis was right to halt the US bishops: Catholic bishops in the US began ceding their teaching authority to fringe groups decades ago. Now that the chickens have come home to roost, a pope has finally stepped in" ... https://international.la-croix.com/news/why-pope-francis-was-right-to-halt-the-us-bishops/8876

Scicluna is going to lead from the #2 position?---he's not the alpha dog? and O'Connell thinks this is going to make a big difference in the Vatican's response to the abuse crimes, while a room full of American Bishops can't? Would someone please help Mr O'Connell untangle himself from the knots he has tied himself up in , as he tries to put a good spin on the Vatican ineptitude.

Yeah, just what we need — the Pope’s spin doctor coming forward to create confusion and a reasonable doubt.

The Vatican has had over 30 years to get this “filth” sorted out and expelled. Once again the Pope is demonstrating that all he is good at is shutting things down, not communicating vision and taking non acting non-decisive control. Spare us the spin doctor routine — we don’t need the communication director to explain the real obvious story to us — 30 years after becoming aware of this “filth” there is not a single, clear comprehensive charter that guides the Church’s responsibilitites among its priests, it Bishops and its Canon, The lack of this is shameful, discouraging and counter to Christ’s own boldness, courage and clarity of His mission and purpose. Step up and act, now.

The number one reason: They don't have a clue.