Sarajevo ethics conference: “no to exclusion and idolatry, yes to building bridges.” 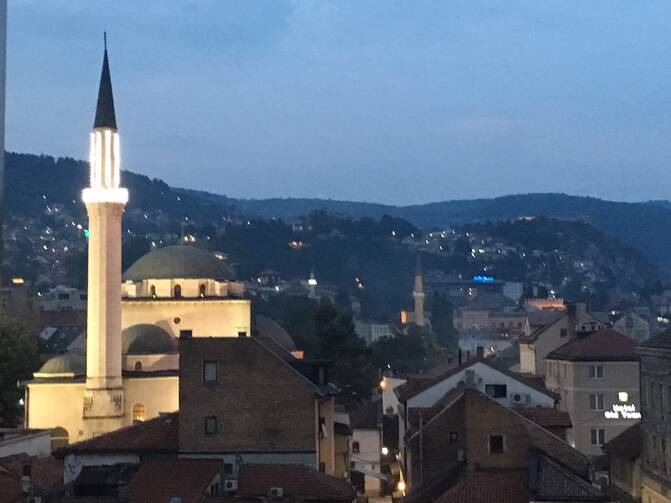 Ferhadija Mosque in Sarajevo, where almost 500 Catholic moral theologians gathered for a conference from July 26 to 29 (photo by author).

Participants at a huge gathering of moral theologians in Sarajevo, Bosnia-Herzegovina, from July 26 to 29 concluded their conference Sunday with a plenary featuring three “prophetic calls” for a reimagining of the international political and social order from prominent scholars: Pablo Blanco of Pontificia Universidad Católica Argentina in Buenos Aires; Emmanuel Katongole, a Ugandan scholar at The University of Notre Dame in South Bend, Indiana; and Linda Hogan from Trinity College, Dublin.

“Our prophetic task is not simply one of critique, but also one of announcing and describing a new order, a new covenant, a new future,” said Father Katongole, comparing the task before ethics scholars to that of the prophet Jeremiah. “The prophet promises not simply restoration. He speaks of a new order when the city will be rebuilt, the once-crushed and despised people will be honored, and visions of economic flourishing will fill city and countryside.”

Dr. Hogan focused on an “ethic of vulnerability” as the “creative ground on which a new sense of political community can be established.” As societies around the world are growing increasingly intolerant and driven by politics of fear, she noted, it is important to recognize that our normative commitments to human rights are “honored more in the breach than in the observance.” She asked, what if we could reshape our political landscapes by focusing on the ways in which we are vulnerable? “Can the existential experience of vulnerability be deployed in the service of a politics that unites rather than divides?”

Linda Hogan: "Can the existential experience of vulnerability be deployed in the service of a politics that unites rather than divides?"

The four-day conference, “A Critical Time for Bridge-Building: Catholic Theological Ethics Today,” was organized by the Catholic Theological Ethics in the World Church network and was held at Katolički školski centar Sv. Josip in Sarajevo. It featured almost 500 theological ethicists from 80 countries and focused on two issues: the global climate crisis and its impact on the environment and marginalized populations, and “the tragic banality of contemporary political leadership in so many countries,” according to a press release. Participants hailed from 78 different countries, and more than 54 percent were from the Global South.

Cardinal Cupich was originally scheduled to preside at a Saturday evening liturgy for conference participants at Sarajevo’s Sacred Heart Cathedral, but a security emergency at the airport in Munich prevented him from arriving in time. In his homily, which was read on his behalf at the liturgy, Cardinal Cupich quoted Pope Francis from the America interview conducted by Antonio Spadaro, S.J., in 2013: “We must not focus on occupying the spaces where power is exercised, but rather on starting long-run historical processes… God manifests himself in time and is present in the processes of history. This gives priority to actions that give birth to new historical dynamics.”

Cardinal Blase Cupich: "There is no magisterium which is not social, because it is in the lived life of people that God works and manifests himself, especially in the dynamic of human relationships."

In “Evangelii Gaudium,” the Magna Carta of his papacy, Pope Francis makes clear that there is no magisterium which is not social, because it is in the lived life of people that God works and manifests himself, especially in the dynamic of human relationships. This is where salvation history unfolds… [P]art of the action you need to take must always involve empowering the people to trust in their ability, in their creative capacity to bring about transformation.

The C.T.E.W.C. network was born of a 2003 planning meeting arranged by James Keenan, S.J., and a group of international ethics scholars, including Soosai Arokiasamy, Benezet Bujo, Margaret Farley, Linda Hogan and Paul Schotsmans. The group articulated a mission statement calling for dialogue that reaches beyond local culture in a global church that was “not dominated solely by a northern paradigm.”

At the closing plenary on Sunday, the third speaker, Pablo Blanco, concluded his remarks with a return to the conference’s theme of bridge-building:

I would like to invite you to say “no” to an economy of exclusion and the new idolatry of money; to a financial system that rules rather than serves; to inequality that spawns violence; to selfishness and spiritual sloth; to sterile pessimism; to spiritual worldliness; to the surrender to cultural imperialism; and to the tragic banality of contemporary political leadership in too many countries.

[T]o say yes to a new relationship brought by Christ; to safeguard human dignity and creation; to the challenge of a missionary discipleship and a renewed inculturation of faith; to the recognition of popular religiosity’s richness; to join men and women committed to truth, justice, solidarity and peace; in summary, to say “yes” to a “bridge-building” theological ethics.

Why are the poor disappearing from the earth? Read Hans Rosling's Factfulness?

Without bridges one remains stranded and isolated. Long live the bridges and the bridge- builders.