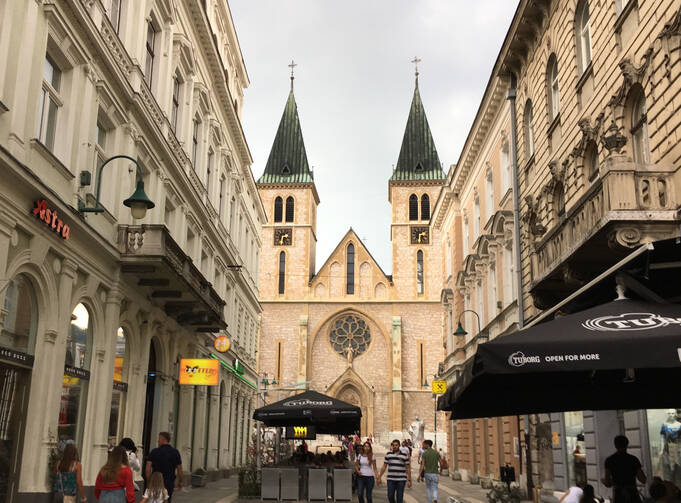 A worldwide gathering of theological ethicists in Sarajevo began on July 26 with a personal welcome: a letter of greeting and encouragement from Pope Francis.

The four-day conference, “A Critical Time for Bridge-Building, Catholic Theological Ethics Today,” was organized by the Catholic Theological Ethics in the World Church network and is being held at Katolički školski centar Sv. Josip in Sarajevo. It features almost 500 theological ethicists from 80 countries. The focus will be on two issues: the climate crisis and its impact on the environment and marginalized populations, and “the tragic banality of contemporary political leadership in so many countries,” according to a press release. More than 75 percent of the countries represented and more than 54 percent of the participants are from the Global South.

In his letter to those attending the conference, Pope Francis noted that the theme of the meeting “is one to which I myself have often called attention: the need to build bridges, not walls. I keep repeating this in the lively hope that people everywhere will pay attention to this need that is increasingly acknowledged, albeit resisted by fear and forms of regression.”

“I find insightful,” Pope Francis continued, “your proposal to create a network between persons on the various continents who, with different modalities and expressions, can devote themselves to ethical reflection in a theological key in an effort to find therein new and effective resources.... Needless to say, this does not mean striving for uniformity of viewpoints, but rather seeking with sincerity and good will a convergence of purposes, in dialogical openness and the discussion of various perspectives.”

The conference, which will be livestreamed, includes a number of prominent voices in Catholic ethics, including the Rev. Charles Curran of Southern Methodist University in Dallas, Tex., Linda Hogan of Trinity College Dublin and Paul Schotsmans of the Catholic University of Leuven in Belgium.

Sarajevo “is neither the industrialized world nor the Global South—instead, we can bridge both.”

The C.T.E.W.C. network was born of a 2003 planning meeting arranged by James Keenan, S.J., and a group of international ethics scholars, including Soosai Arokiasamy, Benezet Bujo, Margaret Farley, Linda Hogan and Paul Schotsmans. The group articulated a mission statement calling for dialogue that reaches beyond local culture in a global church that was “not dominated solely by a northern paradigm.”

In his opening remarks at Sarajevo, Father Keenan announced that he and Linda Hogan are stepping aside as chairs of the network after the meeting and turning leadership over to three theologians who have long been part of the network: Shaji George Kochuthara from India, Kristin Heyer of the United States and Andrea Vicini from Italy. He encouraged participants to “start anew, afresh, mindful of the urgency but even more mindful of the many talents that are here.... We must grow, include, innovate, expand—in a word, go beyond ourselves.”

Father Keenan said the site was chosen because Sarajevo “is neither the industrialized world nor the Global South—instead, we can bridge both.” Considering the city’s history of suffering a historic siege from 1992-95 during the Balkans conflict, Father Keenan noted, Sarajevo offered three important contexts for reflection: “peace building in the aftermath of ethnic conflict; interreligious and cross-cultural dialogue in a predominantly Muslim city (85 percent); and economic struggle (40 percent unemployment).” Ms. Heyer echoed the importance of Sarajevo as a conference locale in her own remarks: “In a city of struggle and of bridges, may we pave new paths together.”

Bienvenu Mayemba, S.J., a theologian from the Democratic Republic of Congo who teaches at Sophia University in Tokyo, also noted the importance of the conference’s wide reach. “My first impression of this gathering is that it is truly international,” Father Mayemba told America. “I am an African, but there are African theologians here I had never met before. And teaching in Japan, I have been more exposed to Asian theologians—but here there are theologians I had never met from all over Asia as well.”

They should look at history and how certain societies developed much faster than others. What happened in the 1700's to a small group of people that they developed differently than others and this prosperity began to spread to much of the world but not all. How have these different development levels affected the political systems? What happened in England and Holland in the 1700's that is eliminating poverty from the world. Everyone attending the conference should read Hans Rosling's "Facfulness."

Hopefully some interesting and new theological perspectives will come out during this conference. The overweight presence of theologians from Global South is encouraging.
Many of the most dynamic and positive theological reflections since Vatican II have come from below the equator, especially in the area of social justice. The future of the Catholic Church is in the Global South. The "domination of the northern paradigm" has shown itself to be bankrupt and its cultural and economic values are biased against the poor.

Greetings to the African theologians.

International ethics conference is an opportunity to evangelize and get evangelized.