Letter from Pope Francis to moral theologians gathered in Sarajevo 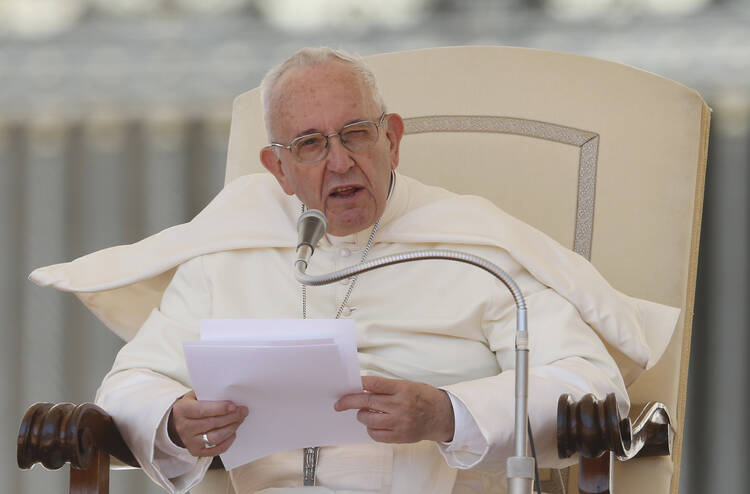 Letter from Pope Francis to theological ethicists gathered in Sarajevo

Participants in a worldwide gathering of theological ethicists in Sarajevo were greeted on July 26 with a letter of welcome from Pope Francis. Read to the approximately 500 participants at the conference, the letter notes the symbolic value of holding the meeting in Sarajevo and also notes that Pope Francis is simpatico with the goals and themes of the participants. The conference, “A Critical Time for Bridge-Building, Catholic Theological Ethics Today,” was organized by the Catholic Theological Ethics in the World Church network and is being held at Katolički školski centar Sv. Josip in Sarajevo. It features almost 500 theological ethicists from 80 countries, focusing on two issues: the climate crisis and its impact on the environment and marginalized populations, and contemporary political leadership around the world.

To the International Conference of Catholic Theological Ethics in the World Church Sarajevo, 26-27 July 2018

I greet all of you taking part in this, your third worldwide conference on theological ethics. It takes place in Sarajevo, a city of great symbolic value for the journey of reconciliation and peacemaking after the horrors of a recent war that brought so much suffering to the people of that region.

Sarajevo is a city of bridges. Your meeting is inspired by this dominant motif, which warns of the need to build, in an environment of tension and division, new paths of closeness between peoples, cultures, religious, visions of life and political orientations. I have appreciated this effort of your from the beginning, when the members of your planning committee visited me in the Vatican last March.

The theme of your meeting is one to which I myself have often called attention: the need to build bridges, not walls. I keep repeating this in the lively hope that people everywhere will pay attention to this need that is increasingly acknowledged, albeit at times resisted by fear and forms of regression. Without renouncing prudence, we are called to recognize every sign and mobilize all our energy in order to remove the walls of division and to build bridges of fraternity everywhere in the world.

The three focal points of your meeting intersect along this journey of bridge building in a critical time like our own. You have given a central place to the ecological challenge, since certain of its aspects can create grave imbalances not only in terms of the relationship between man and nature, but also between generations and people. This challenge - as it emerges from the Encyclical Laudato Si’ - is not simply one of many, but the broader backdrop for an understanding of both ecological ethics and social ethics. For this reason, your concern for the issue of migrants and refugees is very serious and provokes a metanoia that can foster ethical and theological reflection, even before inspiring suitable pastoral attitudes and responsible and carefully planned political policies.

In this complex and demanding scenario, there is need for individuals and institutions capable of assuming a renewed leadership. There is no need, on the other hand, for hurling slogans that often remain empty, or for antagonism between parties jockeying for the front position. We require a leadership that can help to find and put into practice a more just way for all of us to live in this world as sharers in a common destiny.

With regard to the question of how theological ethics can make its own specific contribution, I find insightful your proposal to create a network between persons on the various continents who, with different modalities and expressions, can devote themselves to ethical reflection in a theological key in an effort to find therein new and effective resources. With such resources, suitable analyses can be carried out, but more importantly, energies can be mobilized for a praxis that is compassionate and attentive to tragic human situations, and concerned with accompanying them with merciful care. To create such a network, it is urgent first to build bridges among yourselves, to share ideas and programmes, and to develop forms of closeness. Needless to say, this does not mean striving for uniformity of viewpoints, but rather seeking with sincerity and good will a convergence of purposes, in dialogical openness and the discussion of differing perspectives. Here you will find helpful a particular form of competence, all the more urgent and complex today, to which I referred in the Foreword of the recent Apostolic Constitution Veritatis Gaudium. In mentioning the fundamental criteria for a renewal and a relaunching of ecclesiastical studies, I stressed the importance of “wide-ranging dialogue” (No. 4b), which can serve as the basis for that interdisciplinary and transdisciplinary openness so vital also for theology and for theological ethics. I also pointed to “the urgent need for ‘networking’ between those institutions worldwide that cultivate and promote ecclesiastical studies” (No. 4d).

I encourage you, as men and women working in the field of theological ethics, to be passionate for such dialogue and networking. This approach can inspire analyses that will be all the more insightful and attentive to the complexity of human reality. You yourselves will learn ever better how to be faithful to the word of God which challenges us in history, and to show solidarity with the world, which you are not called to judge but rather to offer new paths, accompany journeys, bind hurts and shore up weakness.

You already have over ten years of experience in building such bridges in your association, Catholic Theological Ethics in the World Church. Your international meetings in Padua (2006) and Trent (2010), your regional meetings on different continents and your various initiatives, publications and teaching activities, have taught you a style of sharing which I trust you will pursue in a way that will prove fruitful for the entire Church. I join you in thanking the officers who have come to the end of their term and those now taking up their responsibilities; I will remember them in my prayers. To all of you I cordially impart my blessing, and I ask you, please, to pray for me.