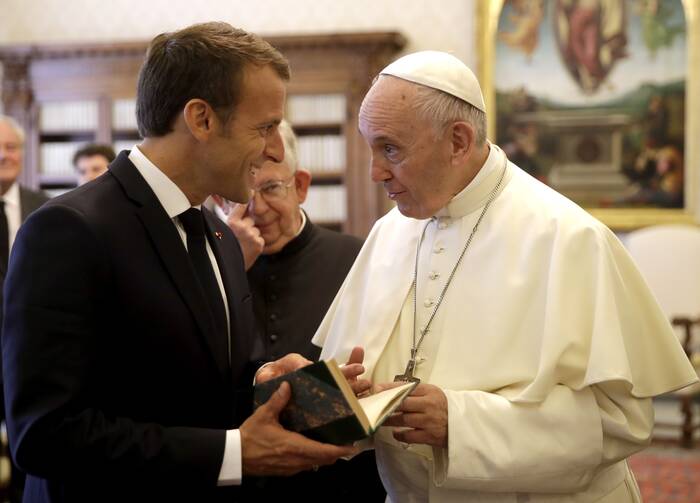 Pope Francis and with French President Emmanuel Macron, left, exchange gifts on the occasion of their private audience, at the Vatican, Tuesday, June 26, 2018. (Alessandra Tarantino/Pool Photo via AP)

When Pope Francis and French President Emmanuel Macron met for the first time in the Vatican this morning they spoke together in private for 57 minutes. They discussed the contribution of religion to French society and focused especially on international issues of major concern including the environment, migration, the conflict situations in the Middle East and Africa, disarmament and the European Union.

Their private conversation, the longest between the pope and a head of state since Francis’ meeting with President Obama in 2014, appeared to have gone extraordinarily well at a human level, if one were to judge by the body language of both leaders at the end of their first face-to-face encounter.

While the details of their private conversation remain confidential, the Vatican issued a statement after the French leader’s departure from the city-state that gave some insight into what was discussed by the French president in his talks with Pope Francis and afterward with the Vatican’s secretary of state, Cardinal Pietro Parolin, and the secretary for relations with states, Archbishop Paul Gallagher.

The statement began by saying that “during their cordial conversations” both sides acknowledged “the good existing relations between the Holy See and France” but also “the contribution of religions to the promotion of the common good of the country” and, in particular, “the commitment of the church” to this.

Their conversation was the longest between the pope and a head of state since Francis’ meeting with President Obama in 2014.

It said they then focused on “global issues of shared interest, such as the protection of the environment, migration, and multilateral commitment to conflict prevention and resolution, especially in relation to disarmament.” It seems clear from this statement that they discussed the Paris Peace Accords, the migration crisis—the worst since World War II—and the need to resolve and prevent conflicts and to engage in disarmament, including nuclear disarmament.

The Vatican statement revealed that the pope and president exchanged views on “various situations of conflict, particularly in the Middle East and in Africa.”

Finally, the statement said, they engaged in “a joint reflection on the prospects of the European project.” This is currently an issue of major concern for Pope Francis and the Holy See.

Pope Francis was pleased to meet President Macron because he, together with German Chancellor Angela Merkel, have emerged as the two strongest leaders of the European Union. These two leaders agree on the urgent need to strengthen and renew the union and to counteract the populist and national movements that have begun to emerge across Europe. Pope Francis already has a very good relationship with Ms. Merkel and looked forward to today’s encounter with the French president in the hope of also building a positive relationship with him.

President Macron presented the pope with a vintage copy of The Diary of a Country Priest.

These two European heads of state, like the pope, agree on the need to respect and promote the Paris accords on climate change—both tried but failed to get President Trump to not withdraw from that agreement. They also agree on the need to address the immigration crisis, though they have somewhat different strategies for handling this challenge. Pope Francis, too, is concerned about the migration crisis that is causing so much dissent within the countries of the European Union, including Italy, where a new government, formed by the populist Five Stars Movement and the xenophobic Northern League, has cracked down hard on immigration and prevented boats bringing migrants from the Middle East and North Africa from docking at Italy’s ports.

At the end of the visit, the pope, the president and his wife, Brigitte, went to a table for the exchange of gifts. There Francis, smiling and in good humor, presented President Macron with a medallion of St. Martin of Tours shown covering a poor man with his cloak, saying “he wished to emphasize the duty of those who govern to help the poor. We are all poor.” He also gave the president copies of the main documents that he has written: “Evangelii Gaudium,” Laudato Sí’,” “Amoris Laetitia,” “Gaudete et Exsultate” and his last message for the World Day of Peace). President Macron, for his part, presented the pope with a vintage copy of The Diary of a Country Priest, by the French writer Georges Bernanos, a book to which the pope has often referred.

The most striking evidence of their positive relationship came at the end of the entire audience when, as they bade farewell to each other, President Macron put his left-hand on the pope’s shoulder and then embraced and kissed him on the cheek, something that is exceptional in a meeting between a head of state and the pope.

President Macron was installed as “the first and honorary canon” of St. John Lateran’s Basilica.

Born into a non-religious family in Amiens, Emmanuel Macron decided to become a Catholic and was baptized at the age of 12. He went onto study at a Jesuit school, La Providence, in his hometown where he met his future wife, Brigitte, then a professor there. He later collaborated with the French Protestant philosopher, Paul Ricoeur, and went on to work in Rothschild’s Bank. According to the French media, the 40-year-old president now professes to be agnostic.

Today France is a secular state, marked by “laïcité” or the strict separation of the state from religion. Nevertheless, it has a predominantly Christian population: Around 64 percent of its 65 million citizens are Christian, and some 83 percent of all Christians are Catholic, though the practice of religion is very low.

Before meeting the pope, President Macron met the leaders of the Sant’Egidio community. Andrea Riccardi and Marco Impagliazzo, the founder and president of this lay Catholic movement that has been deeply involved, together with the Valdesian church in Italy and some European governments, in building “humanitarian corridoors” to help refugees and migrants from conflicts and poverty in the Middle East and North Africa reach a safe haven in Europe. They discussed the migrant crisis with the president.

This afternoon, President Macron was installed as “the first and honorary canon” of St. John Lateran’s Basilica—the pope’s basilica in Rome, a unique honor given originally to the kings of France at the time of King Henry IV (1589-1610) for their services to the basilica and subsequently passed on to all the heads of state of France, a country once known as “the elder daughter of the church.”

Over the past half-century, French presidents Charles de Gaulle, Valéry Giscard d’Estaing, Jacques Chirac and Nicolas Sarkozy were installed as honorary canons, as Macron was today, but Presidents Georges Pompidou, François Mitterrand and François Hollande, while accepting the title, did not take possession of their seat there.

“The title grants no rights to its holder, not even that of entering the church on horseback, contrary to a stubborn rumor,” Nicolas Senèze, correspondent for the French Catholic daily La Croix, wrote in a recent article.

Emmanuel Macron is now the leader of the Western Alliance (or what's left of it), and the free world--after Drumpf has decided he wants no part of the role.

Can Macron lead the globalist forces? We shall find out: it seems Germans will sack his mom Merkel in a few weeks.