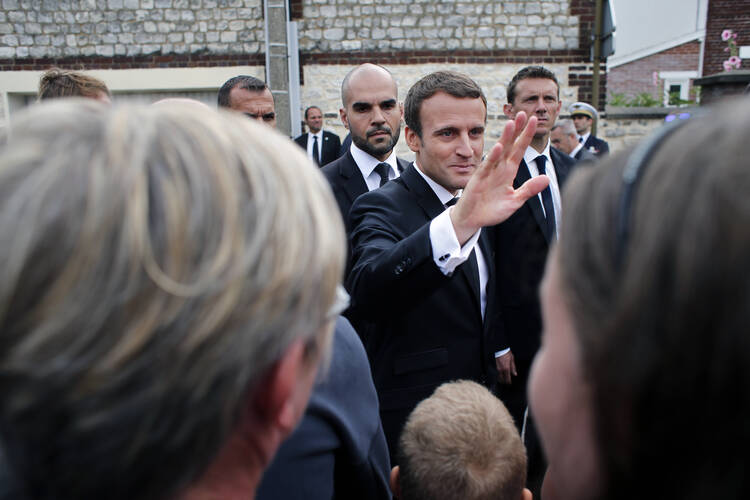 PARIS (AP)—French President Emmanuel Macron delivered an impassioned speech Wednesday after a Mass marking one year since the killing of a local French priest by two 19-year-old Islamic extremists who pledged loyalty to the Islamic State group.

Calling him a "martyr," Macron addressed crowds outside the small Saint-Etienne-du-Rouvray church in Normandy where the throat of Father Jacques Hamel, 85, was slit as he celebrated morning Mass on July 26, 2016.

"Hamel's smile has become a reminder of resistance in the face of bigotry," Macron said at the podium.

Pope Francis: assassinated French priest is a martyr and a blessed
Gerard O’Connell

"By murdering Father Hamel at the foot of his altar, the two terrorists undoubtedly wanted to sow the thirst for vengeance and retaliation among French Catholics," Macron said. "They have failed."

"Hate has not triumphed, and it will never triumph," he said.

The mayor of Saint-Etienne-du-Rouvray, Joaquim Moise, spoke of the horror that the two jihadis brought to the sleepy Normandy town.

"A year ago, the population of Saint-Etienne was thrown into the whirl of emotions," said the mayor from outside the church.

"The initial disbelief was followed by fear then mixed with incomprehension, sorrow, disgust. In a horrific act, Jacques Hamel's life was taken away."

Following the ceremony, local dignitaries unveiled a 2-meter metal memorial tribute to the slain priest with writings from the Universal Declaration of Human Rights.

"This memorial is a symbol of peace and brotherhood," Moise said.

The Islamic State group claimed responsibility for the attack.