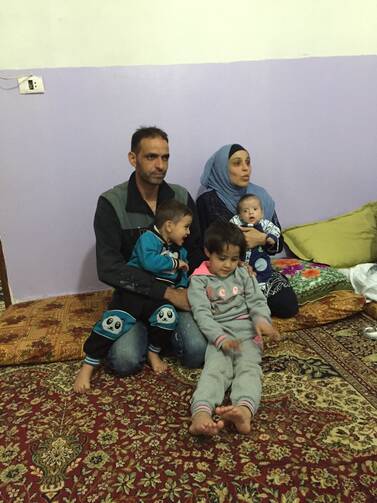 A young Syrian couple, Mouhammad Amin El Oujali, 35, and his wife Zafira El Aquad, 34, and their three young children, including a two-month-old baby suffering from hydrocephalus and spina bifida, are among 101 vulnerable refugees that will take an Alitalia plane from Beirut to Rome in the early morning hours of May 3 to begin a new life in Italy.

They managed to join the group at the very last moment thanks to the insistence of Zafira, who pleaded for her baby son, Layah, who needs immediate surgery. He will now get this treatment in Turin, Italy, a few days after this Sunni Muslim family from Homs arrives in Italy.

Zafira and Mouhammad’s family are among the 38 lucky families (all Syrian except one from Iraq) who will board the flight to Rome. Thirty-eight of the 101 refugees are Christian, and 30 percent are under the age of 12. They are able to take this safe route to freedom, instead of risking their lives in a boat crossing the Mediterranean, thanks to the “Humanitarian Corridors” project organized by the Sant'Egidio Community, a Catholic lay organization, the Federation of Protestant Churches and the Waldesian Table in Italy, with the full cooperation of the Italian Government. The three Christian bodies that have organized this project in collaboration are also taking economic responsibility for the refugees they sponsor; the government does not pay for this.

The project, the first of its kind in Europe, has become fully operational at a time when several European countries are closing their doors to refugees from Syria, Iraq, Libya and elsewhere in Africa and Asia.

Conceived as an ecumenical response to the biggest humanitarian crisis Europe has experienced since the end of the Second World War, it has three main objectives. First, to ensure that refugees fleeing from war avoid having to risk their lives in unsafe boat trips across the Mediterranean as they seek refuge in Europe. Sadly, tens of thousands have already drowned at sea in these boats, including many children.

A second goal is to prevent refugees from being exploited by ruthless human traffickers who offer them a place in precarious boats for about $2,000 per person. A third, and highly important aim is to enable refugees in vulnerable situations (such as victims of persecution, torture and violence, families with children, elderly people or persons with disabilities) gain legal entry to Italy with a humanitarian visa and with the possibility of applying for asylum.

The story of Mohammad and Zafira is emblematic of what this project is about. They shared their experiences with me when I visited them in their home at Damour, an area in the hill country south of Beirut, on April 29, together with Maria Quinto, the Sant’Egidio coordinator. Zafira had made contact with Quinto two weeks earlier and pressed home the urgency of her case. Their Spartan home consists of two rooms with cushions on the ground, but no furniture. Somehow they have managed to get electricity and a television, but there is no running water in the still under-construction, multi-story building where they live as squatters with other refugee families.

Until 2012, they had lived in the city of Homs. Mouhammad worked as a plumber and also owned a small shop selling plumbing fixtures. Zarifa was a clothes designer. They were not rich, but they had a comfortable life.

“We never thought of leaving our home, we were happy,” she said. But their tranquil life was shattered when the rebels came. Soon after, 5,000 of President Bashar al-Assad’s soldiers arrived in tanks and armored cars and the fighting started.

The people were caught in the cross fire. Snipers started shooting. Zafira and her family were afraid to go out, even to get water. Then one day Shia fighters carried out a massacre, killing 38 persons including a pregnant woman, whose body they cut open with a knife, tearing out the fetus, Zafira said.

Many people they knew were arrested and never seen again; they lost many relatives and friends. They and their neighbors were terrified. One day many decided to abandon their homes and fled they city that had become like hell; it was no longer possible to continue living there.

Zafira already had a young daughter, May, and was five months pregnant when they left home. Her husband was reluctant to leave, but she convinced him saying: “If we stay we die; if we travel we risk death. So it’s better to travel.”

They traveled with 24 others, sometimes by car, sometimes walking.  After a week’s travel, they entered Lebanon illegally and lived on soup and bread. Eventually they managed to get documents. Her first son, Fayasal, was born in a camp in the Bekaa Valley in Lebanon in September 2013. Her youngest son, Layah, was born in Sayda, south of Beirut on February 28 of this year, but soon he will be in Italy, where hopefully he can get the good medical care he needs.

Zafira is a very strong character, full of hope. With shining dark eyes and joy in her voice, she spoke of her happiness at being able to go Italy. Her family’s situation had become unsustainable in Lebanon, she said. Their documents had expired; they had no money. She and her husband could not get work.

She had sold her gold bracelets to get into Lebanon, she had nothing else to sell. “If nobody had helped me, then I would have tried taking a boat to Europe,” she added.

Now she dreams of better things. “I hope that there I can cure my child, and my children can go to school and my husband find a job,” she said.

She hopes too to meet her 25-year-old brother once again. He is in Germany, having crossed from Turkey to Greece in a boat in which many drowned. But she never wants to return to Syria where she has seen such horrors and, moreover, “we have nothing there, we have lost everything.”

Mouhammad, Zarifa and the children will be settled in Turin, Quinto told me. They will be given Italian lessons and a home and helped to integrate into the local community. Young Layah will undergo surgery immediately. Already an Italian doctor from the Humanitarian Corridors project has visited him in Beirut and obtained the necessary information to prepare for the operation.

Seven other refugee families live in the same building as Zafira. Many dropped in to say hello when they heard that Maria from Sant’Egidio was there. They came to plead their cases with her too. She promised to return again around May 13 to consider their appeals.

The lucky ones that will take the plane on Tuesday morning are the second group of the 1,000 refugees the organizers plan to bring to Italy this year and next. The first group of 93 refugees (including 41 children) arrived in Italy from Beirut on February 29, and plans are under way to bring a third group in May.

All three groups are being brought from the Lebanon where they have been living as refugees. Lebanon, a country of some 5 million inhabitants, has shown extraordinary generosity in accepting 1.1 million refugees from the war in Syria that started in 2011. (That figure represents those who are registered, the real number is believed to be much higher). This small country, which came through a bitter civil war 1975-1991, is now host to a greater number of refugees than all of the 28 European Union countries put together. Despite serious internal political problems—it has not been able to elect a president since mid-2014, Lebanon puts Europe and much of the world to shame with its response to this humanitarian crisis.

Today, Lebanon has the world’s largest number of refugees per capita. But in early 2015, finding itself overwhelmed by the influx of those fleeing the war in Syria, it too decided to enforce restrictions on those fleeing from that conflict, making it almost impossible for such refugees to enter the country now.

The dramatic plight of the refugees in the Lebanon underlines the crucial importance of bringing the war in Syria to an immediate end. Until that happens, pioneering ecumenical initiatives like the Humanitarian Corridors project offers a ray of hope and new life to many vulnerable people caught in desperate situations. The organizers of this venture are hoping that Christians in other European countries may decide to follow suit.

Gerard O'Connell, America's Vatican correspondent, is traveling this week with members of the Sant'Egido community in Lebanon.