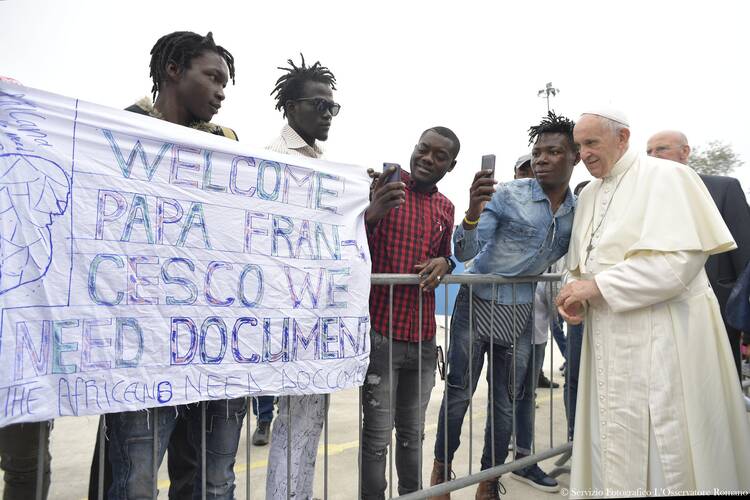 Pope Francis has again called for a more welcoming attitude to the migrants and refugees and has denounced “the spread of rhetoric decrying the risks posed to national security or the high cost of welcoming new arrivals” in countries that they seek to reach. He said such rhetoric “demeans the human dignity due to all as sons and daughters of God.”

He declared, moreover, that “those who, for what may be political reasons, foment fear of migrants instead of building peace are sowing violence, racial discrimination and xenophobia,” and said these “are matters of great concern for all those concerned for the safety of every human being.” Although he named no countries, Vatican observers believe he is referring especially to political leaders and leaders of populist movements in several western and eastern European countries, as well as in Australia and the United States.

Pope Francis stated this and much more in his Message for the World Day of Peace, which the Catholic church celebrates on the first day of every New Year, and which dioceses, parishes and communities are encouraged to study and discuss. This year’s message carries the title: “Migrants and Refugees: men and women in search of peace.”

Although he named no countries, Vatican observers believe he is referring especially to political leaders in several western and eastern European countries.

In it, the pope notes that there are 250 million migrants in the world today, of whom 22.5 million are refugees, and that “all the indicators” suggest that migrations at a global level “will continue” to be an issue in the future.

He identified several causes for this global phenomenon of migration. First, “armed conflict and other forms of organized violence continue to trigger the movement of peoples within national boundaries and beyond.” Second, people also migrate mainly “because they desire a better life and not infrequently try to leave behind the ‘hopelessness’ of an unpromising future.” Third, “there has been a tragic rise in the number of migrants seeking to flee from growing poverty caused by environmental degradation.” He said, “most people” seek to migrate through “regular channels,” but some take “other routes” mainly “out of desperation” when ever legal safe pathway appears impracticable.

From the beginning of his pontificate Francis has given priority attention to the phenomenon of migration. He has spoken to heads of states, church leaders, chiefs of international and humanitarian organizations that are dealing with this major issue of the 21st century. “We know that it is not enough to open our hearts to the suffering of others,” he said. Much more remains to be done before our brothers and sisters can once again live peacefully in a safe home.”

Francis asserted that “welcoming others requires concrete commitment, a network of assistance and goodwill, vigilant and sympathetic attention, the responsible management of new and complex situations that at times compound numerous existing problems, to say nothing of resources, which are always limited.” But, he said, “by practicing the virtue of prudence, government leaders should take practical measures to welcome, promote, protect, integrate and, within the limits allowed by a correct understanding of the common good, to permit [them] to become part of a new society.” At the same time, he acknowledged that “leaders have a clear responsibility towards their own communities, whose legitimate rights and harmonious development they must ensure, lest they become like the rash builder who miscalculated and failed to complete the tower he had begun to construct.”

Pope Francis suggested a strategy that could help states offer “asylum seekers, refugees, migrants and victims of human trafficking an opportunity to find the peace they seek.” He summarized this strategy in four distinct concrete actions: welcoming, protecting, promoting and integrating.

He explained that “welcoming” means “expanding legal pathways for entry and no longer pushing migrants and displaced people towards countries where they face persecution and violence. It also demands balancing our concerns about national security with concern for fundamental human rights.”

“Protecting” he said, “has to do with our duty to recognize and defend the inviolable dignity of those who flee real dangers in search of asylum and security, and to prevent their being exploited.” He mentioned in particular “women and children who find themselves in situations that expose them to risks and abuses that can even amount to enslavement.”

He described “promoting” as “supporting the integral human development of migrants and refugees.” And here, he emphasized “the importance of ensuring access to all levels of education for children and young people.”

“Integrating,” he explained, “means allowing refugees and migrants to participate fully in the life of the society that welcomes them, as part of a process of mutual enrichment and fruitful cooperation in service of the integral human development of the local community.”

The Vatican normally releases the pope’s message for the World Day of Peace in mid-December, and send it to all heads of states, governments and of the international organizations, in advance of that day. This year, however, it moved the publication date to Nov. 24 because two international meetings about migrants and refugees will be held in Puerto Vallarta, Mexico, (Dec. 4-6) and Geneva, Switzerland (Dec. 13-14).

These meetings are part of the process agreed to by the 193 members states of United Nations, at the UN General Assembly, in New York, on Sept. 19, 2016, with a view to the drafting of two international agreements called “Compacts”: the first on the question of migrants, the second on refugees. The basic elements of both compacts are contained in “The New York Declaration,” which was approved at the General Assembly last year. The Mexico meeting will discuss the migrant phenomenon, the Geneva one will focus on the refugee question. It is hoped that by the end of 2018 these two compacts will be agreed to by states at the UN General Assembly and provide concrete direction and guidance to governments in addressing both issues in the years to come.

Pope Francis, in his message, recalled that the Migrants and Refugee Section of the Vatican dicastery for integral human development has already presented 20 action-points as the Holy See’s contribution to the international discussion on the compacts. “It is my heartfelt hope this spirit will guide the process that in the course of 2018 will lead the United Nations to draft and approve two Global Compacts, one for safe, orderly and regular migration and the other for refugees,” he stated. As shared agreements at a global level, he said “these compacts will provide a framework for policy proposals and practical measures.” He emphasized the need for the drafting of these agreements “to be inspired by compassion, foresight and courage, so as to take advantage of every opportunity to advance the peace-building process. Only in this way can the realism required of international politics avoid surrendering to cynicism and to the globalization of indifference.”

Cardinal Peter Turkson, head of the Vatican’s dicastery for integral human development,” who presented the message to the press today, confirmed to America that the Holy See’s efforts in this field mirrors in many ways its efforts to help reach an international agreement on climate change in Paris in 2015. Jesuit Father Michael Czerny, one of the two under-secretaries of of the Migrants and Refugee Section, which responds directly to the pope, told America that he would be attending the Mexico conference, and said he is hopeful that the member states of the UN can agree to the compacts in 2018.

We are all migrants and refugees privileged to be walking on God's Holy Ground and living in God's time.