For French Catholics, the political future has more questions than answers 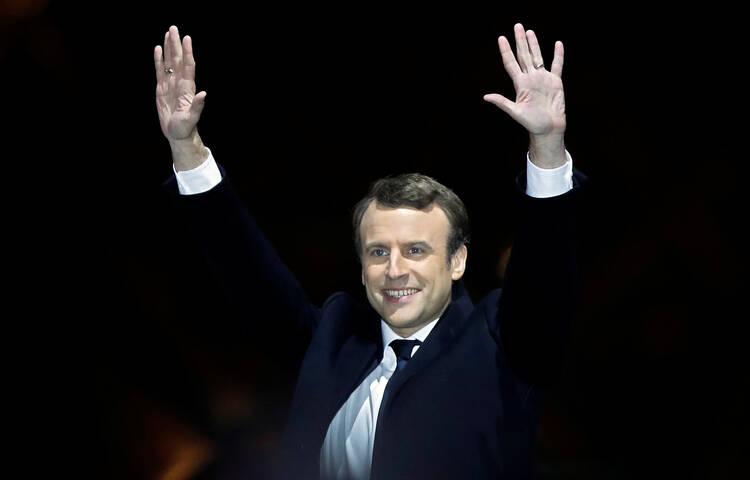 French President-elect Emmanuel Macron celebrates at his victory rally near the Louvre in Paris May 7. (CNS photo/Christian Hartmann, Reuters)

The melodrama of the French presidential election is over: Emmanuel Macron, the centrist technocrat, has resoundingly defeated far-right leader Marine Le Pen. But one drama is only entering act one: What will be the impact of France's surging, rejuvenated, newly-assertive Catholicism on French politics?

While no politician or party can ever perfectly reflect the rich tapestry of Catholic social doctrine in this fallen world, the Macron-Le Pen face-off posed a singular challenge to any Catholic trying to make a faith-informed vote. Each of the candidates, in his or her way, seemed almost lab-designed to be like nails on a chalkboard to a Catholic sensibility. Macron: the candidate of technocracy, ”liberated” free markets, free trade and “anything goes” on social issues. Le Pen: the candidate of scapegoating—of elites, of immigrants, of foreigners, of Muslims, take your pick.

Of course, to the political mainstream, Ms. Le Pen seemed especially unacceptable even as Mr. Macron, sitting as he does in the very center of that mainstream, seemed unremarkably conventional. The French Conference of Catholic Bishops all-but explicitly endorsed him (and several bishops did) and Catholics followed suit. Weekly Mass-going Catholics plumped for him at 71 percent, according to an IFOP-Pélerin/La Croix poll, a higher proportion than his second round score of 66 percent.

And yet, underneath the seeming unanimity, cracks are showing. When one looks not at weekly Mass-goers but the broader “practicing Catholics,” those who go to Mass at least once a month, Marine Le Pen outperformed Macron among that group. Among those who “occasionally” go to Mass (less than once a month, but more often than Christmas and Easter), Marine Le Pen won almost half.

The Macron-Le Pen face-off posed a singular challenge to any Catholic trying to make a faith-informed vote.

But there is something that polls don’t show: The church is a series of concentric circles. The polls survey weekly Mass-goers as a group, but within that group there are those who don’t just go to Mass every week but volunteer, staff offices, start movements and groups and charities and breathe life into them, and so forth. This engaged group is small, perhaps too small to poll, but anecdotally it tends to be much more conservative, and much more drawn to the Le Pen vote.

Meanwhile, France as a whole has moved to the right, because of many factors: an unpopular (and tax-hungry) Socialist government, mass migration and terrorism. There is much talk of the Macron-Le Pen run-off signifying an end of the traditional left-right divide in the country that invented that divide, since both of them claim to transcend it. But there is a much more straightforward way to look at it, which is that the French two-round election system functions as an open primary, and that the most right-wing candidate of each side won his or her primary. The Front républicain, the tradition by which all mainstream political leaders and institutions quarantined the National Front, showed many cracks this time: Marine Le Pen was endorsed by another more moderate conservative candidate, Nicolas Dupont-Aignan, and the far-left Jean-Luc Mélenchon refused to explicitly endorse Mr. Macron.

French Catholics' natural candidate, the proudly religious, statesmanlike and conservative-but-not-extremely-so François Fillon, was booted off the first round, and Catholics now have no obvious home in French politics. The new leader of the Republican Party, François Baroin, who aims to become prime minister if his party wins the upcoming legislative elections, is a staunch defender of French-style secularism and agitated against allowing manger scenes on public grounds as chairman of the French Mayors' Association.

How the “New Catholics” will settle into French politics, therefore, remains very much up for grabs. Will they, already fairly conservative, drift all the way to the far right? Will the laudable defense of France’s “Christian roots” against a stultifying secularism turn into an exclusivist defense of national identity? Will they become a partisan group, or will they engage politics in a transpartisan way, as many hope? If they become an organized faction, will they become a French version of the American Christian Right, despite the red flags thrown up by the decidedly mixed record of politicized religion in the wake of Trump? All of these questions are as open, if not more so, than they were.

Pascal-Emmanuel Gobry, who lives in Paris, is a contributing writer to America, a fellow at the Ethics and Public Policy Center in Washington, D.C., and a columnist at TheWeek.com.