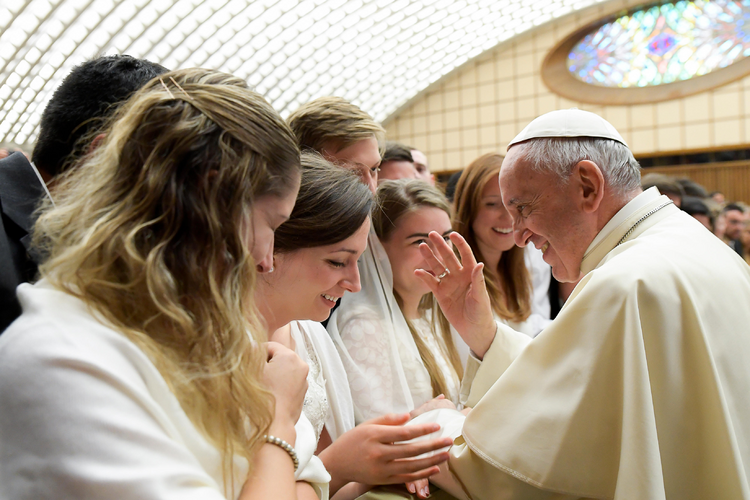 You have heard it said, “Who run the world? Girls” (Bey 4:12). But we ask: Who runs the church? Popes, of course. But across the country there are dedicated women of faith taking the lead in parishes, schools, social ministries—and magazines. Our guest this week is one of them.

Kerry Weber is an executive editor at America and the driving force behind a groundbreaking new survey of U.S. Catholic women. We ask her why Catholic women are so often reluctant to claim the label of role model and what the church can do to lift up the important work women are already doing in the church.

Make sure to check out the new special issue on women in the church, which features Kerry’s piece, “The humble, indispensable women leading the Catholic Church you’ve (probably) never heard of,” plus tons of other great articles diving into the survey data.

And in Signs of the Times, Pope Francis says he is “truly afraid” of nuclear war—and how Catholics in Hawaii reacted when they thought that such a war was coming. Next, we discuss what America’s findings about the politics of U.S. Catholic women might mean for the 2018 midterm elections. Finally, we tackle the history of football’s “Hail Mary pass” and the question: Should church doors ever be locked?

Have you left us a review on Apple podcasts yet? We’d be eternally grateful if you did. Please. Not that we’re desperate. If you already have, thank you! Do keep in touch: Write us an email at jesuitical@americamedia.org and follow us on Twitter @jesuiticalshow so you can take part in our unscientifically significant polls!

Pope Francis: “I am truly afraid” of nuclear war.

Overall, the survey found that 59 percent of Catholic women are Democrats or lean Democratic, whereas 38 percent are Republican or lean Republican.

2 ounces of Jameson, an ounce of St. Germain and a dash of Angostura bitters, over ice. (The original recipe calls for Scotch. Apparently, Irish whiskey is not, in fact, the same thing as Scotch. You live and you learn.)