Ahead of Reformation anniversary, Lutherans pray for full communion with Catholics

Ahead of Reformation anniversary, Lutherans pray for full communion with Catholics 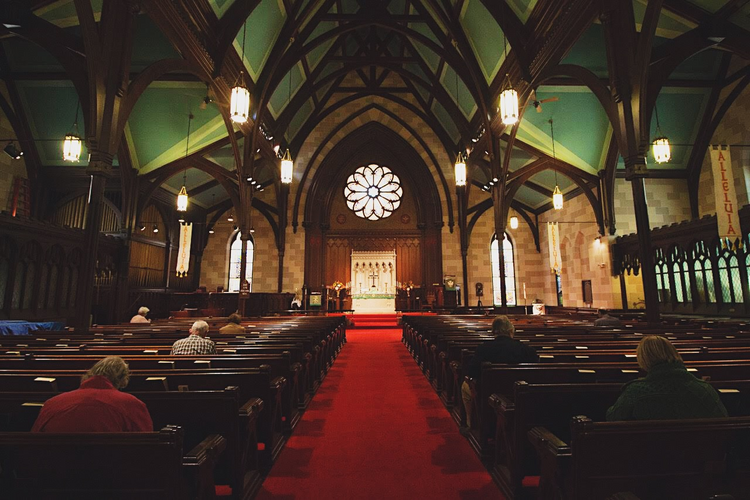 If a Catholic were to walk into Trinity Evangelical Lutheran Church in New Haven, Conn., he or she would not feel out of place. The altar is centrally located, vested in green for Ordinary Time and flanked by a lectern and pulpit. An altar rail separates the sanctuary from the nave. Daylight streams in from stained-glass windows depicting the Virgin Mary and the Christ child.

A Catholic would also feel comfortable at a typical Lutheran Sunday liturgy. A procession is followed by introductory and penitential rites, the Scripture readings are the same as those read in Catholic Mass on most Sundays and bread and wine are blessed and shared during Communion.

A Catholic would also feel comfortable at a typical Lutheran Sunday liturgy.

Of course, there are differences. For example, Trinity Lutheran does not have Stations of the Cross hanging on the wall, and the congregation’s response is “and also with you,” rather than “and with your spirit.”

Yet the common elements of both traditions is an important theme of this year’s historic commemorations. On Oct. 31, Christians around the world will be marking the 500th anniversary of the Reformation. Martin Luther is traditionally believed to have nailed his 95 Theses to All Saints’ Church in Wittenberg, Germany, on Oct. 31, 1517, thus catalyzing Protestant reformations across Europe. This anniversary also celebrates more than 50 years of official dialogue between the Lutheran and Roman Catholic churches following the Second Vatican Council.

“I think now more than ever, we are coming to realize that there is so much more that unites us than divides us,” says Rev. Ryan Mills, Pastor of Trinity Lutheran, about the 500th anniversary. At the Bible study before service, Pastor Mills and about 10 parishioners discuss the upcoming commemoration while studying Luther’s sermons on Easter readings. They express gratitude for more open communication with their Catholic counterparts.

It may be surprising for Catholics to recognize shared elements of faith with Lutherans. Similarly, a “large part of what it means to be Lutheran is to have that Catholic identity,” says Jonathan Sanchez, a third-year master of divinity student at Yale Divinity school. Mr. Sanchez, who regularly attends Trinity Evangelical while at school, wants Lutherans to remember that they are grounded in the Catholic traditions that shaped Luther. “What the Lutherans maintained in the 16th century,” Mr. Sanchez argues, “is just as important as what they reformed.”

Similarly, a “large part of what it means to be Lutheran is to have that Catholic identity."

Looking forward to the anniversary, Trinity Lutheran parishioners are praying for full communion between Catholics and Lutherans. They do not celebrate division in the Body of Christ. The Evangelical Lutheran Church in America (E.L.C.A.), the largest Lutheran denomination in the United States, believes in the true presence of Jesus Christ in Holy Communion. E.L.C.A. churches like Trinity Lutheran invite all baptized Christians to receive Communion at their churches on Sundays.

For Lutherans interested in ecumenical relations, not being welcome to share in Catholic sacraments can be painful. “It’s not fair,” one parishioner told America, “because any Christian can receive the sacraments here.”

Karen Johnson and Robert Quinlan know this pain intimately. Originally hometown friends, Ms. Johnson and Mr. Quinlan reconnected after their first spouses passed away. Today, Ms. Johnson, a parishioner at Trinity Lutheran, is preparing to marry Mr. Quinlan, a Roman Catholic. They developed a rhythm of attending Catholic Mass on Saturday evenings and service at Trinity Lutheran on Sundays.

As evident at Trinity Lutheran, there exist ways to celebrate Lutheran identity while also recognizing partnership and prayer with Catholic counterparts.

But Ms. Johnson knows the pain of Catholic-Lutheran tensions. When she was growing up, her Catholic cousins told her younger brothers that they were going to hell because they were not Catholic. Later in life, a priest publicly told her she was not welcome when she went up for Communion at her Catholic granddaughter’s Confirmation. Today, she is grateful for Pope Francis, whom she sees as moving away from the pain of the past.

As they prepare for marriage, Ms. Johnson and Mr. Quinlan join others who are excited about celebrating the dialogue between the churches. Mr. Quinlan did not start learning about Lutheranism until he reconnected with Ms. Johnson. He says it is important for Catholics to learn about Lutheranism in order to recognize what they hold in common and grow more deeply in their faith.

They both, along with others at Trinity Lutheran, demonstrate the importance of relationships in ecumenical dialogue. Through encountering the other as a friend and partner, long-held divisions are bridged.

From 1967: A Luther Renaissance in Catholic Thought
William W. MacDonald

The 500th anniversary can be an opportunity for what Mr. Sanchez and others call “Lutheran triumphalism.” But narratives that over-emphasize Lutheran developments over the existing Catholic tradition perpetuate real division in the church. As evident at Trinity Lutheran, there exist ways to celebrate Lutheran identity while also recognizing partnership and prayer with Catholic counterparts.

With Pope Francis and Catholic leaders making institutional efforts to promote unity among Christians, the work of ecumenism should also flourish at the ground level. Pastor Mills and his parishioners can offer Catholic parishes a model of friendship and prayer while both Catholics and Lutherans await full sacramental unity.

This is an informing and helpful article. But I’d suggest that the in-pew Catholic remain uninformed on what separates Lutherans and Catholics, and why our church, helped by the presence of the Holy Spirit, seems incapable of resolving differences that arose now 500 years ago. “Change” and compromise are not always/ever bad. We’ve been praying for Christian Unity since I was an altar boy, and I’m in my 70s now. When?

While the prospect of Lutherans and Catholics reuniting is exciting to me, I hesitate inviting them into a divided faith community as so often illustrated in the diverse and often opposing comments to articles found on these pages. We may want to work on finding unity among ourselves, before inviting others to join in unity with us.

This is a fine article and I hope it is widely shared. I was humbled and Privileged to Preach and Preside at the Divine Liturgy at the invitation of The Rev Dr Ryan Mills. The sanctuary is indeed beautiful and the people are most welcoming. Just an observation to be shared......We do not and did not abolish The Mass.......The Divine Liturgy, The Divine Service should not be referred to as a mere "service".....the bread and wine are not "blessed" but rather the earthly elements of bread and wine become for us the True Body and Blood of Jesus the Christ by His WORD, spoken over them by a presbyter (priest/pastor) who is understood to be In Persona Christi...in the Person of Christ. As for "anyone who is baptized" is invited to receive this Blessed Sacrament, it is understood that they believe in the Real Presence....so a Baptist , Pentecostal should not come forward. It is our fervent prayer that one day soon we be allowed to share the Body and Blood of Christ........

I always figured that Communion is between God & me, so I have taken communion in Lutheran, Catholic, and Baptist churches.

It seems beyond irony that a Lutheran Church is more like a Pre-Vatican II
Catholic Church than most Catholic Churches built since Vatican II in America.

I guess we went, at least in how we built our Churches, or am I supposed to say Houses of Worship, right past Lutheran Churches to Congregational Gathering Halls.

If the Lutherans truly believe Communion is the actual Body and Blood
of Christ, I say, welcome them to the table and show me where their lies.

According to Lutheran bishop Margot Kässmann, former leader of the Evangelical Church in Germany and now serving as a "Reformation Ambassador" , in an interview at the Italian news agency ANSA, reunification between Lutherans and Catholics is unimaginable.
“First : Reunification is not possible for precise dogmatic questions. Secondly, reunification is not desirable because it would inevitably represent flattening. Thirdly, the difference between the Lutheran Church and the Catholic Church is such, and is so intrinsically linked to their own nature, to put them on two completely different levels. On the one hand there is an organization of Christians who has nothing to say about salvation, because it thinks the issue is of exclusive relevance to the individual and his relationship with God. On the other hand, there is a Church that considers itself a necessary mediator between the creature and the Creator.”