From 1967: A Luther Renaissance in Catholic Thought 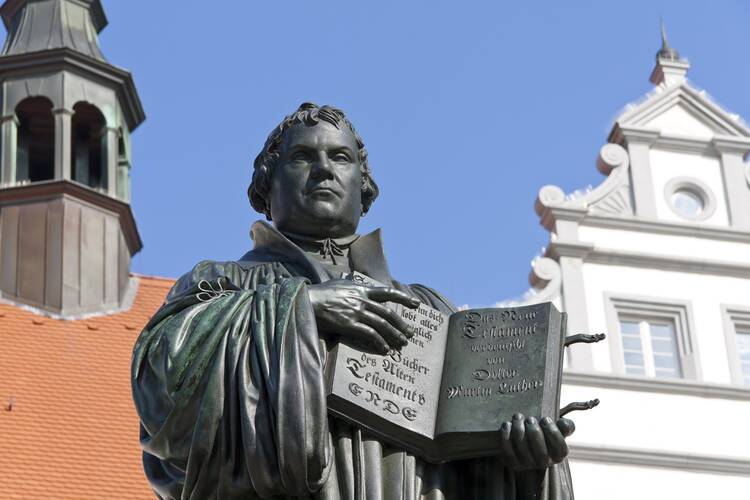 It has been 500 years since Martin Luther nailed his 95 theses to a church door, and 50 years since this piece examining how Catholic historians understand Luther appeared in the pages of America.

The spirit of ecumenism and mutual appreciation that—happily—now characterizes much of Protestant/Catholic dialogue was a relatively recent development in that history. William W. MacDonald points out in this article that by avoiding polemics and trying to understand Luther in the context of medieval Catholicism, Catholic historians had something new to offer for both Catholic and Protestant understandings of Luther. The author was an assistant professor of history at Lamar State College, Beaumont, Tex.

Less than a generation ago, Luther was often blindly condemned as a sex-ridden fallen monk who had deliberately imperiled the papacy, shattered forever the unity of Christendom, distorted religious truths and somehow seduced millions of Europeans into embracing his heretical doctrines. Today, however, many Catholic theologians and philosophers, men like the late John Courtney Murray and Michael Novak, have acknowledged that Luther was a compassionate man of great human qualities and a profoundly spiritual thinker who was driven to revolt by worldly and incompetent Popes and by a corrupt Renaissance Church, which was trading upon its monopoly of salvation to exploit its members. At the recent Vatican Council, which accepted many of Luther’s ideas—including the vernacular liturgy, the supremacy of Scripture and the concept of the visible Church as the people of God who all share in the priesthood of Christ—it was reported by an American magazine that delegates were greeted with a picture of Martin Luther with a caption that read: “In your heart you know he’s right.”

Why Martin Luther matters, even within the Catholic Church
Judith Valente

Nowhere has this Luther renaissance in Catholic thought been more prevalent than in Catholic historiography. In a truly admirable spirit of co-operation and goodwill, contemporary Catholic historians are avoiding the bitter polemics that characterized previous Catholic interpretations of Luther and are turning their attention to the study of the basic, dynamic qualities of the religious, political, social and economic conflicts and currents of the Reformation age.

This renaissance in present-day Catholic historiography on Martin Luther has had a tremendous impact upon Reformation scholars, both Catholic and Protestant. It clearly indicates to Catholics that Luther was a complex individual who defies simple characterization; that the Reformation he began cannot be fully understood in terms of good and evil, right and wrong, black and white; and that Catholics must face the facts of corruption in the Church if they wish to comprehend the background to Luther’s religious revolution. Protestant historians, on the other hand, especially Gerhard Ritter and Jaroslav Pelikan, are today writing about Catholicism before and during the Reformation with sympathy and understanding.

Catholics must face the facts of corruption in the Church if they wish to comprehend the background to Luther’s religious revolution.

Here is, I think, the crux of the problem of earlier historiography on Martin Luther: just as some Protestant historians weakened their arguments by exaggerated praise, so the Catholic historians weakened theirs by exaggerated condemnation. Thus, perhaps the two greatest contributions of Catholic historians to Reformation scholarship are their placing of Luther in the setting of medieval Catholicism and their correction of the godly image of Luther that flourished from the works of effusive Protestant admirers.

"Luther was often blindly condemned as a sex-ridden fallen monk." Even with one's eyes wide open, the "spiritual" Luther is a hard sell in light of his bedding down an ex-nun and encouraging others to do the same. Pretty darn carnal for an alleged Christian mystic.

From this article, it appears that all Luther did was attack the corruption among the clergy. If he had done that well, and brought about needed reform in clerical morals, and stopped there, then there might be some basis for praising his work.

But Luther did not stop with attacking the corrupt clergy (which he soon became a part of!). He arrogantly tore apart the unity of Christianity and the truths of Divine Revelation solely on his own arrogant authority.

Luther introduced the sola scriptura heresy. He rejected a large part of Divine Revelation and the Catholic Faith: the authority of popes and bishops, many of the sacraments, purgatory, the invocation of the saints and numerous other beliefs. He was filled with hate for Jews. He abandoned his priestly vow of celibacy, married an ex-nun and encouraged other priests and religious to do the same. He had a disgraceful part in the Peasant Uprising in Germany which killed thousands of people. He opened the floodgates of doctrinal dissent which tore apart the unity of Christianity and opened the door for the myriads of dissenters who followed him, so that today we have thousands of Christian denominations all believing something entirely different from each other!

Luther a “mystic of grace” as one bishop now opines!? Ya gotta be kidding!