Child Martyrs of Tlaxcala recalled for their devotion to faith 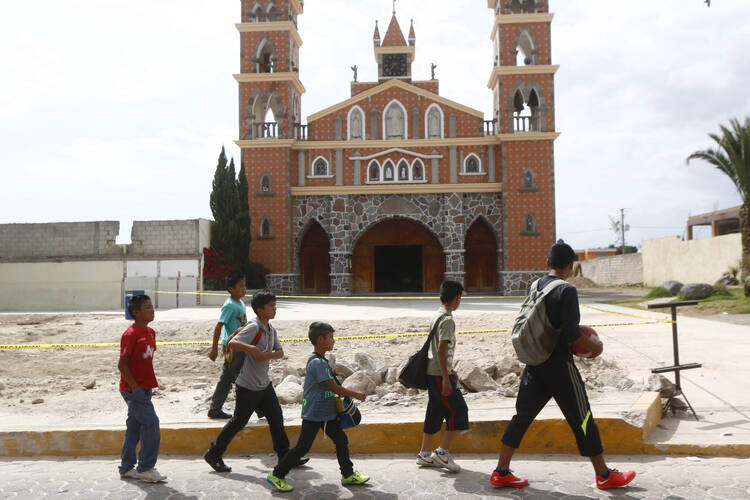 Children walk past a church in the Mexican state of Tlaxcala in this 2015 file photo. (CNS photo/Francisco Guasco, EPA)

MEXICO CITY (CNS) -- Blessed Cristobal was about 12 or 13 when he confronted his father in 1527 over drinking "pulque," an alcoholic beverage made from fermented sap of agave plant.

He poured out the pulque in the family home and told his father, a cacique (local leader) called Acxtecatl, to give up idolatry.

His father, according to an account from the Diocese of Tlaxcala, Mexico, locked Blessed Cristobal in his room and repeatedly beat him. The youth, lying on his death bed, told his father, "Oh father, do not think that I am angry because I am very joyous. Know that you have honored me in a way much more than all your lands and titles."

Acxtecatl attacked his son again, killing him, but also making Blessed Cristobal one of the first martyrs in Mexico and the New World. Blessed Cristobal, along with two other indigenous Tlaxcalteca youths, Blessed Antonio and Blessed Juan, will be canonized Oct. 15 at the Vatican. The latter two were 12 or 13 at the time of their deaths in 1529.

The trio, known as the Child Martyrs of Tlaxcala, were among the early converts to Christianity in Mexico. They are considered the first martyrs in the Americas, "protomartires," because they were killed for their faith and will be canonized for that reason.

"With this new recognition, our beatified (child martyrs) will no longer only be venerated in our diocese, rather they will promoted as models of Christian life and intercessors for the universal church," said a small diocesan booklet on the three.

"That spirituality of the child martyrs should take us (to) live the mission, taking the message of Christ to our relatives, friends, neighbours, colleagues ... in our Diocese of Tlaxcala to other places in Tlaxcala and the world," the booklet said.

The three were baptized and trained as evangelizers by the Order of the Friars Minor in what is now Tlaxcala state, just to the east of modern day Mexico City. They later attempted to spread the faith in their own families and elsewhere in Mexico.

Blessed Antonio was the grandson of Xicohtencatl el Grande (the Great), one of the main rulers of Tlaxcala. He was joined by Blessed Juan and a third person, Diego, to evangelize nearby Oaxaca state.

Both Blessed Antonio and Blessed Juan were killed in what is now Puebla state. The pair collected and smashed idols, bringing a reaction of beatings from locals, which led to their deaths. Diego escaped.

The story of the child martyrs was recorded early on, but was regional in importance even though their story is part of a narrative positioning Tlaxcala as the "cradle of the faith" in Mexico.

Indeed, Tlaxcala, Mexico's smallest state, has played an outsized role in the country's history. Tlaxcala's native population cooperated with the Spanish, led by Hernan Cortes, and joined with the conquistadores to take Tenochtitlan, the seat of the Aztec empire that later became Mexico City.

With the canonization, the story of the child martyrs becomes better known and serves as an example for young people to follow nearly five centuries later

"It's unfair (because) Mexico didn't exist at the time" and many of the indigenous groups were at odds with each other, especially the Aztec, prior to the Europeans' arrival, said Father Ruben Rodriguez, an Opus Dei priest who has studied the child martyrs.

The martyrs were beatified in 1990 by St. John Paul II at the Basilica of Our Lady of Guadalupe in Mexico City.

With the canonization, the story of the child martyrs becomes better known and serves as an example for young people to follow nearly five centuries later, Father Rodriguez said.

They were important for the church in its early evangelization of indigenous populations, though the masses started to convert after Mary appeared to St. Juan Diego in 1531 at Tepeyac Hill, Father Rodriguez said.

The existence of the "ninos martires" (child martyrs) is not disputed, however. Nor is the role of the Tlaxcaltecas in the Spanish conquering Mexico.

"They were willing to deal with the Spaniards and to help them defeat the Mexica" as the Aztecs were also known, said Rodolfo Soriano-Nunez, a sociologist in Mexico City. "Without Tlaxcalteca help, Cortes would have had a hard time figuring out how to attack Tenochtitlan."