When the pope releases a statement ‘motu proprio’ it’s important—but why? 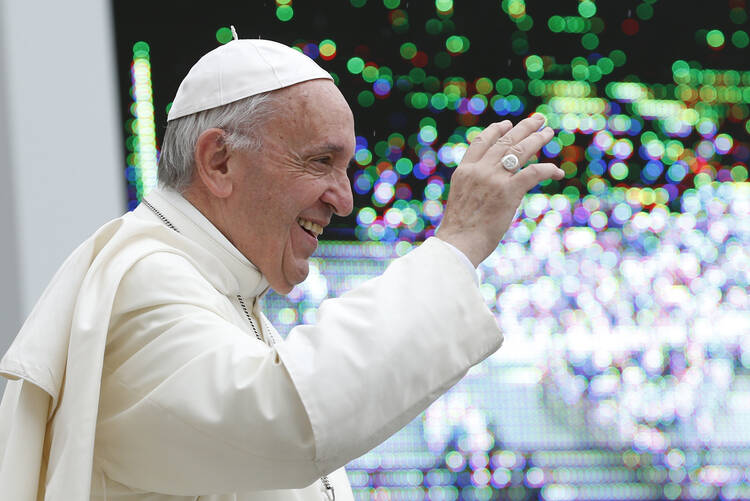 The Vatican announced on May 9 a decree from Pope Francis related to bishop accountability and child protection. The decree, "Vos Estis Lux Mundi," was issued motu proprio. This new law joins many others promulgated by Pope Francis, including “Magnum Principium,” which involved the fraught issue of liturgical translations, for which the pope shifted the responsibility back to national bishops’ conferences, as well as “Summa Familiae Cura,” which rebooted a Rome-based academic institute established by Pope John Paul II to study family life, in order to incorporate some of Francis’ teachings on the subject.

In all three instances, the pope’s teachings were issued motu proprio, a detail reported by Catholic journalists to underscore the significance of both moves. The Latin phrase certainly sounds weighty—and it is—but more than a few Catholics were left wondering what, exactly, it means.

A document is released motu proprio when the pope has something to say that is not in reply to a request but instead comes from his own interest in a particular matter.

There is a governing element to statements released motu proprio.

In the Catholic Church, the pope serves as both executive and legislator. What he says, goes. But how he says something indicates how far it will go. When he issues documents motu proprio, he acts in his capacity as legislator, meaning, for example, that he is updating canon law or making other changes that amount to a legislative act. Legislative changes made by a pope overrule decisions by other Vatican departments, so even small changes to church law resulting from documents issued motu proprio can be significant.

The pope’s new liturgy document: who was involved and what that tells us
Massimo Faggioli

Take the rise of the Latin Mass—and the return of the liturgy wars—over the past decade. Pope Benedict XVI altered rules from 1970 that limited the Latin Mass by releasing “Summorum Pontificum,” an apostolic letter that he issued motu proprio in 2007. That statement altered church law by waiving a requirement that priests who wish to celebrate the Latin Mass obtain special permission from church authorities; critics say that removing the requirement was a rollback of reforms from the Second Vatican Council..

Sometimes, a pope will act in a legislative manner, but the changes will be more sweeping than small modifications of church law. In these cases, the document is not issued motu proprio but is instead called an apostolic constitution.

There are also other forms of papal teaching, including encyclicals and apostolic exhortations, that come from the pope and are considered part of the church’s teaching, but they do not necessarily concern church law. They can, however, have great impact on the Catholic Church: The ongoing debate about whether divorced and remarried Catholics should be admitted to Communion owes its genesis not to a change in law, but to “Amoris Laetitia,” an apostolic exhortation.

Editor's note: This article was updated May 9, 2019, with information about "Vos Estis Lux Mundi."

Michael J. O’Loughlin is the national correspondent for America and author of  The Tweetable Pope: A Spiritual Revolution in 140 Characters. He is based in Chicago.

Please correct me if I am wrong but I thought Vatican II was about the
Renewal of the Church, not so much Reform. [ As if the Protestants had it
right all along and now, 400 years after Trent, the Church was finally
putting its house in order. ]

The Church should be honest and admit that the changes in the Liturgy
and their impositions, and that is what they were, were un-necessarily
forced upon the "People of God". Furthermore, they were poorly implemented, catechised, and did not meet the spiritual needs of the
vast majority of Catholics - for if they had - the pews would not
be so empty on Sundays.

I do not understand why it bothers someone, if they have the option of
attending other Masses, whether I go to a Latin Mass, a Spanish Mass,
an English Mass be they Old or New.

There is no denying that ICEL mistranslated the Mass in its first attempt,
failing to produce a noble simplicity in that translation and in later ones.
The 1998 revision takes liberties with the Latin that met the desires of certain groups to eliminate as many references to traditional ways of speaking about God and Salvation as possible.

I don't want my prayers to be written in contemporary English as
late 20th century English is nothing to take pride in. I rather say
them as my parents, grandparents, great-grandparents...said them.

As for the present day liturgy, I saw the survey, there is a Mary who feels
she is very close to heaven at the Masses she attends. I cannot say the
same for my parish, it seems trapped in the 1970's. We don't sing Hymns,
we sing Songs as the Pastor reminds us, the same Pastor, [ who says the
Canon in four minutes but then spends 15 minutes in rambling homilies
and 8 minutes reading the Parish Bulletin before dismissing us] who shambles in with a neon cloth about his body, tennis shoes on and a strong notion that the Mass is about him and the Folk Group, not Jesus and certainly not the flock he has been entrusted to help lead to Heaven. Few of the songs move the soul, or even the mind/heart or body - for they are neither stirring, nor beautiful, uplifting or even toe tapping.
Yet the Folk Group dominates the Mass - as the arrangements are not written for congregational singing and
still they 'perform' for 77 % of the Mass.
Silence is just not permitted during Mass and impossible to experience
before and after Mass, as people just talk on the way in and the way out.

As for Francis and his Motu Proprio on the Liturgy...
Well rather heavy handed - was a Synod of Bishops consulted,
were the Laity consulted...how odd to want to revive the Spirit of Vatican II
without asking the People of God what they need ?

Your absolute duty, Pope Francis, is to seek out the lost sheep
and bring them back to the fold. Jesus does not speak about scolding
them for be too rigid and berating them for wanting to retain a Liturgy
that served the Church well.

If some people find solace in the Old Mass and it being said in Latin,
certainly the Kingdom of God is expansive enough and merciful
enough to allow them that indulgence, which you as Pope can
easily grant.

As for Pope Francis' motu proprio on the liturgy, he didn't have to consult anyone on its subject-matter; that's the nature of this type of papal communication.

You conflate only to denounce. In what language the Mass is celebrated has nothing to do with poor choices in music.

There is a difference between hymns - which the congregation should be able to sing, and sing easily and eagerly -
and songs which may not be written for congregational singing. If you do not fully understand the difference please
find an Anglican Hymnal. To sit there while the leader of the Folk Group sings her solo's is not what Vatican II hoped for.

If people wish to attend a mass in Spanish and sing Spanish Hymns, or a mass in Polish and sing Polish Hymns,
or a Mass in Latin, who are you to judge ?

Vatican II did not mandate the end of the Latin Mass or the end of using Latin in whatever new liturgy that might arise from the Council.
I was at Vatican II, were you ?
How many histories of Vatican II have you read ?
How many Bishops and Cardinals did you interview about what went on ?

As for the fruits of the Liturgical Changes following from Vatican II and sadly of those imposed by some Liturgists
who seemed to have hated the Pre-Vatican II liturgy as their remarks made clear - well where are they ?

The Church I grew up in had four Masses on Sunday. There were more people at Mass than were was room for so
some stood outside. We sang the Hymns, we participated in the Mass. The priest did not mumble the words of the
Canon. Now that same Church is 1/3rd full at the one Mass offered on the weekend...

As I said, what is wrong with letting people attend the Mass of their choice ?
If a Parish has the New Mass in English, the New Mass in Spanish and the Old Mass in Latin - who is being offended ?

How odd, Christopher, that you speak for all the "others" - when so many across the world find solace in
the older traditions and liturgies.

As for Francis, show me that he followed the Spirit of Vatican II by issuing the Motu Proprio.
Or is it that you just like his dictatorial actions when you agree with them ?

As to why you come across as so intolerant of what you may never have experienced - is an open question.