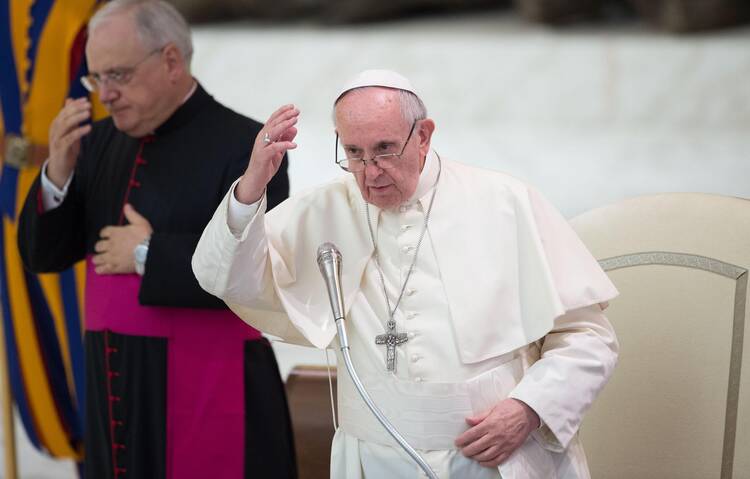 Pope Francis today issued new instructions for the approval of liturgical texts, rebalancing the relationship between the Vatican and local bishops’ conferences in favor of greater local control. The pope's order, in the form of an apostolic letter issued motu proprio (that is, on his own initiative) titled “Magnum Principium,” reverses the trend in recent years toward greater Vatican control over the texts used in the Mass. “In order that the renewal of the whole liturgical life might continue,” Francis wrote, “it seemed opportune that some principles handed on since the time of the [Second Vatican] Council should be more clearly reaffirmed and put into practice.”

RELATED: A liturgical expert's analysis of what the new rules mean

Earlier this year, Pope Francis had ordered a review of “Liturgiam Authenticam”, which set out the principles governing liturgical translation. Archbishop Arthur Roche, the secretary of the Congregation for Divine Worship and the Discipline of the Sacraments and president of the commission reviewing “Liturgiam Authenticam,” has written a “key to reading” the newly issued instructions. In this key, he explains that “the object of the changes is to define better the roles of the Apostolic See and the Conferences of Bishops in respect to their proper competencies which are different yet remain complementary. They are called to work in a spirit of dialogue regarding the translation of the typical Latin books as well as for any eventual adaptations that could touch on rites and texts.”

The full text of the motu proprio, Archbishop Roche's explanatory article, and an explanatory note regarding the specific  changes to canon law are available as PDFs attached below.

I must say I rather agree with ghernyw. The changes, if that's what they are, seem slight indeed. Of course the three documents are written in the most appalling sort of legal language imaginable (though Fr. Baldovin deserves our congratulations for trying to translate their meaning into English -- rather like a friendly attorney who tries to explain to you what the document you're being asked to sign really means. But of course the experienced lawyers in the firm are trained to use language that in reality will mean whatever they may decide (or to put in another way their language is consubstantial with their wishes, whatever those may be).

What would it take for instance to correct the phrase "I believe" in the communal recitation of the creed (credo) with "we believe" (credimus) which makes sense when we say it together? What would it take "propter nos homines" in the Creed, and translate it not improperly as it is now as "for us men" and make it match the "homines bonae voluntatis" of the Gloria, which is correctly translated as "people of good will" rather than "men of good will?" (I'm no Latinist, but I do know the difference between "homo" (gender-free person) and "vir" (man, masculine person as opposed to "femina" (woman, who is also a homo, but not a vir).

This is a good start, as it attempts to restore the proper balance between national episcopal conferences and the Vatican. It was understood during and after Vatican II that Rome would *confirm* a liturgical translation *approved* by a national bishops' conference (cf. SC-36.3 and .4, respectively) unless doctrinal error was involved. Unfortunately, JPII and B16 were determined to roll back the bishops' liturgical authority. JPII's Liturgiam Authenticam imposed, as one blogger has noted on another site, transliteration, not translation. This papal behavior was a blatant abuse of authority. One can only hope that Francis or a future bishop of Rome will issue revised guidance that supersedes Liturgiam Authenticam.

I submitted a post on Saturday, September, 9th and was cited by
Nicholas Clifford around Noon on Saturday but it seems to have disappeared.

I read the "Breaking News Article" and the three documents attached.
I really don't see what all the hub-bub is about - as it seems that the
Liturgy has to be approved by Rome.

If I am missing something, can someone please let me know.

I emailed you to let you know that your comments was held for moderation because you don't have a real name listed on your account, as is required by our comments policy. Your other recent comments have been placed in the moderation queue for the same reason. I'm leaving this one visible in case you're not checking your email, so you'll see what the issue is.

The intent is always to have the common language mirror the scriptural texts from which they derive. That’s hard when the original scriptural languages convey ideas and meanings that common contemporary languages often do not.

The English of the USA, Canada, England, and Australia are in fact vastly different. To be sure, anything that helps to better translate the scriptural texts into contemporary common languages will be a benefit to worship.

It's only a matter of time before more-enlightened-than-thou human vanity and sins of pride exploit a new era of loose translations. Here comes theologians promoting "centering prayer" as being just as Eucharistic as the Mass itself.