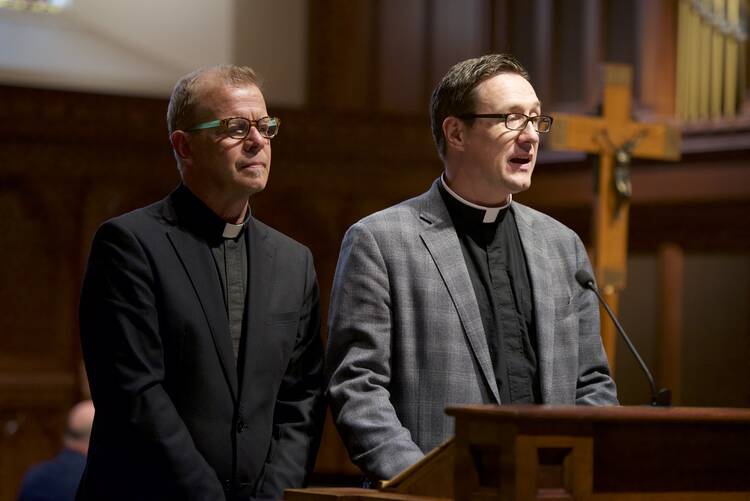 Jesuit Father Gregory Schenden, campus chaplain at Georgetown University and the Rev. Bryant Oskvig, Protestant chaplaincy director on the campus, speak in a joint address on Sept. 15 during the university's "1517-2017: Lutherans and Catholics: Then and Now" conference in Washington. (CNS photo/Rafael Suanes, courtesy Georgetown University)

WASHINGTON (CNS) -- Catholic-Lutheran ecumenical efforts have borne fruit over the past 50 years, noted two speakers in a joint address Sept. 15 during Georgetown University's "1517-2017: Lutherans and Catholics: Then and Now" conference.

Kathryn Johnson, director of ecumenical and interreligious relations for the Evangelical Lutheran Church in America, the largest U.S. Lutheran body, said she rejects the concept of "ecumenical winter" as if to describe a stall in ecumenism. "There are signs of change that we're seeing around us," she said, adding "autumn" may be a better description and noting that Christians will have to decide "what to do with the harvest."

Johnson said there exists a "deep misunderstanding we have of each other still," which needs a "hermeneutic of generosity" to overcome despite 50 years of dialogue. "There are no easy thanksgivings or cheap repentances," she added during the presentation, "Lutheran-Catholic Dialogue: Accomplishments and Challenges."

She cited the 1999 Joint Declaration on the Doctrine of Justification, which "changed the teaching of each church," as a watershed moment. The declaration -- which stated that Christians are redeemed by "grace alone ... while calling and equipping us to do good works" -- has since been affirmed at least in part by the World Methodist Council, the Anglican Communion and the World Communion of Reformed Churches.

There exists a "deep misunderstanding we have of each other still".

Shaking off some of Lutheranism's darker moments is "an ongoing and unfinished task," Johnson said. "We disavow" Martin Luther's anti-Semitic writings from later in his life, and Lutherans are still dealing with violent wrongs committed against Anabaptists nearly 400 years ago, for which "the only possible recourse was to ask forgiveness."

But progress is undeniable, according to Johnson. Affirmation of "Declaration on the Way: Church, Ministry and Eucharist" at last year's ELCA assembly won approve from "99 percent-plus" of assembly delegates, she noted. The document attempts to reach common theological ground between the two faiths. "That was a way of telling the church, 'Get on with this, please,'" she said.

The U.S. bishops' Committee on Ecumenical and Interreligious Affairs unanimously affirmed the document's 32 "agreements" -- consensus statements that Catholics and Lutherans have said are not church-dividing differences.

Sister Susan Wood, a Sister of Charity of Leavenworth, who is a systematic theology professor and chair of the theology department at Marquette University and a former president of the Catholic Theological Society of America, agreed that the outlook is positive. '"There are graces of the Reformation," she said. "Not all of it is beat-your-breast."

Ecumenical efforts are not always smooth, she noted, as fruits of the U.S. Catholic-Lutheran dialogue seek a European context. Indeed, most international Lutheran dialogue leaders are still German, it was noted, and only recently did one dialogue have a Lutheran representative from each continent.

Countering criticism that ecumenical efforts to date are "low-hanging fruit," Sister Wood advised the Georgetown audience to "read these agreements out loud" to verify how substantial they are.

"Since Vatican II, we have acknowledged an imperfect communion between Lutheran and Catholics," she added, urging that "intermediate steps" be approved on the way to full communion.

"Since Vatican II, we have acknowledged an imperfect communion between Lutheran and Catholics."

In Lutheranism, Sister Wood pointed out, parish is where "the church is" -- although Lutheran leadership acknowledges the need for structure -- and the denomination requires laypeople to be part of its governance. By contrast, Catholicism's sense of church is rooted in the diocesan bishop -- although "most people get their experience of church in the parish," she said -- and decision-making is housed in the magisterium.

Catholicism, Sister Wood argued, needs to redefine the Latin "defectus" in its long-held stand against Lutherans. Instead of "lacking," she said, it should mean "something missing." And she advised "getting out from using the word 'transubstantiation' to say that something's missing" in Lutherans' understanding of the Eucharist, as the Council of Trent used the word as one way to describe the transformation from bread and wine to the body and blood of Christ.

"There is no substantial difference in Lutheran and Catholic belief in the real presence of Christ in the Eucharist," she added.

She suggested that intercommunion could happen in places "where people can't get out, like nursing homes and prisons."

Sister Wood said ecumenism is "not a hobby, it's not a sidebar, but it's front and center the work of the Gospel," and not "a threat to ecclesial identity."

"If I were a Catholic I would say, 'Perhaps this is the time to explore that (the role of the pope),' but we're not there yet." Johnson said. Sister Wood said ecumenism needs to be "talked up more in the pulpit," adding there are closer ecumenical ties at the lay level that have not made their way to formal dialogue partners.

The Lutheran Church-Missouri Synod, which is the largest Lutheran body not in the World Lutheran Federation and which was not a signatory to the 1999 joint declaration, "gave a surprisingly positive agreement" to "On the Way," Johnson said, adding, "This is extraordinary, and I'm still trying to take it in."