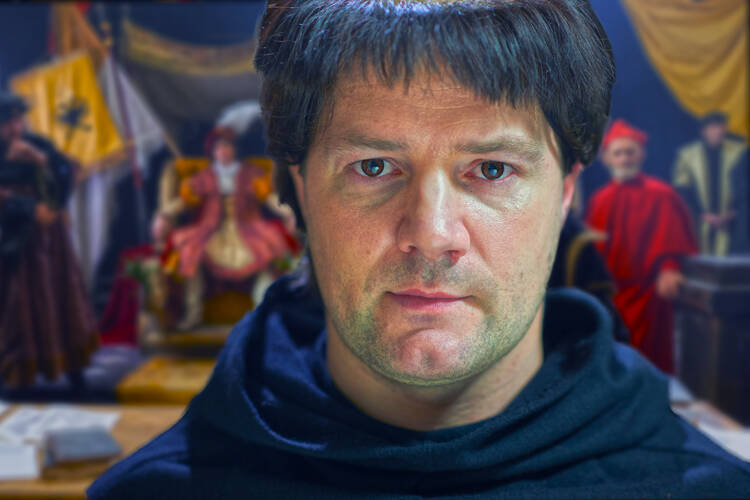 Padraic Delany as Martin Luther at the Diet of Worms in 1517. (Courtesy of Jake Thomas/PBS)

It won’t bring the tonsure back into fashion, but the two-hour documentary “Martin Luther: The Idea That Changed the World” (airing on Sept. 12 at 8 p.m. on most PBS stations) might eliminate some head scratching about church history, the theological distinctions between Christian denominations and how much influence religious thought has had on the secular world (whether or not the secular world cares to acknowledge it). It also breathes some welcome life into a somewhat forbidding figure—the “simple monk” who really did change the world, became the first mass-media sensation and, among many other things, indirectly led to the founding of the United States.

Narrated by Hugh Bonneville (“Downton Abbey”) and directed by newcomer David Batty, “Martin Luther” gets into the nuances of doctrine in a way that will not lose a more secular audience. Nor will it bore, say, the readership of America. What drove Luther to nail his 95 theses to the door of the Castle Church in Wittenberg in 1517 and ultimately break with Rome? It was not just his outrage at the sale of indulgences, nor the church’s more generalized corruption (“which we can’t deny,” says one of the film’s expert witnesses, Cardinal Timothy Dolan of New York). It also involved Luther’s conclusion that faith, rather than works, paved the road to salvation and that a literal reading of Scripture trumped all other argument.

Luther is portrayed in this film as much more of a Catholic than he is generally thought to be, as well as an inadvertent agent provocateur. Cardinal Dolan makes the cogent observation that Luther—whose writings were read widely thanks to Mr. Gutenberg’s recent invention—was providing ammunition to European kings eager to exploit the nationalist sentiments spreading across the continent and threatening the Holy Roman Empire and its ruler, Charles V. It was Charles who grasped (as Pope Leo X apparently did not) what a meddlesome priest Luther really was. Luther’s outrageous suggestion that the common worker was the equal of the clergy in the eyes of God is something that can be linked to arguments about equality still being made today. (Not that they should have to be.)

The most provocative material in “Martin Luther: The Idea That Changed the World” bookends the film. As a law-school dropout and priest-to-be, Luther is seen—via extensive if bare-bones re-enactments featuring Padraic Delany (“The Tudors”)—as something of a lunatic. No one says it out loud, but the message of “Martin Luther” is that a person capable of igniting a global revolution requires precisely the kind of devotion/obsession/mania that Luther exhibited, especially as a young man. His self-torturing doubts about his worthiness before God were epic, as were his confessions, which could be hours long. “One has to feel sorry for the person he was confessing to,” concedes one Luther authority, while another recalls the anecdote in which a priest tells the endlessly penitent seminarian, “Come back when you have something serious to confess.”

The talking-heads portion of “Martin Luther” and its entertaining roster of theologians and Luther biographers is actually the best thing about the program. The testifiers are not irreverent, exactly, but they acknowledge Luther’s difficulty as a human (“What must it be like to be so sure you’re right?” someone wonders) and the invidious way his writings have been interpreted—by the Nazis, for instance, who adapted Luther’s late-inning anti-Semitism for their own evil devices. There are apologies made (Luther’s loss of a daughter is viewed as an embittering moment in his life) but no absolution.

One of the more interesting segments comes late, when Luther’s continuing influences are charted, in the fashion usually reserved for crowned heads and Old Testament cataloguing: Luther begets Calvin, who begets Presbyterianism, which begets Puritanism, which begets America, for instance. There is a fascinating account of the Marburg Colloquy, at which Luther and the Swiss theologian Ulrich Zwingli clash over the issue of transubstantiation, ultimately leading to the split between Lutheran and Reformed Protestantism over the essence of the Eucharist. (“This is my body,” Luther says, quoting Jesus from the Gospel in an attempt to defeat Zwingli and put the matter to rest.) Luther’s place in the schism between Henry VIII and the pope, who was siding with Charles V, who was siding with his aunt, Catherine of Aragon, borders on the juicy. How the supremely spiritual Luther fit in the politics of his time never fails to be amusing.

Nor does it cease to be influential: In a concluding sequence, we learn that in the early 1930s a Baptist minister from Georgia named Michael King was so inspired after a trip to Germany that he changed his name to Martin Luther King. He changed his son’s name, too. Luther’s legacy is not always direct. But the idea that he “changed the world” is never a question.