Poll: Most Protestants and Catholics believe faith and works are necessary for salvation 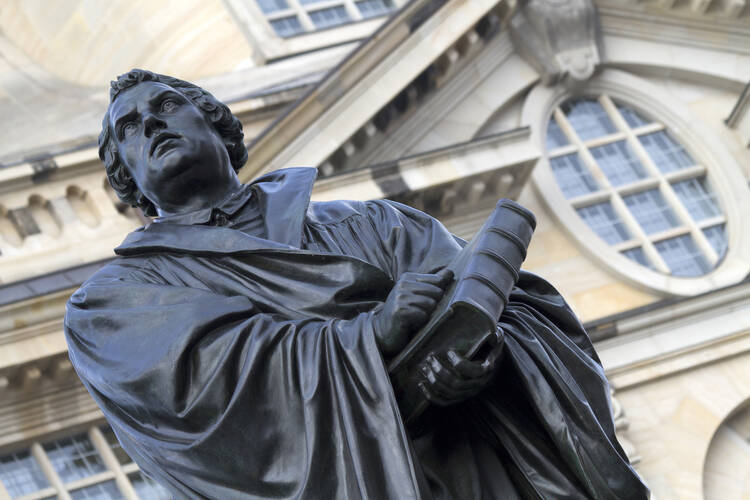 Statue of Martin Luther in Dresden

Ahead of the 500th anniversary of the Protestant Reformation, a majority of U.S. Protestants, 52 percent, believe that both good deeds and faith are necessary for salvation, a new Pew Research Center poll reports. Meanwhile, 52 percent of the U.S. Protestants polled hold that Christians need the guidance of church teaching and tradition in conjunction with the Bible.

The new data is surprising because these positions are traditionally associated with the Catholic faith. Protestant reformers taught that salvation was attained through faith alone (sola fide) and that Scripture alone has the authority to govern Christian faith and practice (sola scriptura).

Today, according to the Pew poll, only 30 percent of U.S. Protestants believe in both sola fide and sola scriptura. Another 35 percent believe in either “faith alone” or “scripture alone” but not the other. The remaining 36 percent believe in neither. By comparison, of the U.S. Catholics surveyed, 81 percent believe that both good deeds and faith are necessary for salvation, while 75 percent believe Christians need the Bible and tradition.

What were once church-dividing teachings no longer define the majority of American Protestant belief.

The new findings stress that what were once church-dividing teachings no longer define the majority of American Protestant belief. White evangelicals are more likely to hold fast to both sola scriptura and sola fide (44 percent) compared to their white mainline Protestant (20 percent) and black Protestant counterparts (19 percent). Yet the data show that American Christians, in general, are more likely to agree than disagree on these basic Christian beliefs.

The Pew Research Center also released a similar survey of European Christians. Among its primary findings is that Catholics and Protestants see each other as more similar than different today. Though the research affirms the often-discussed low levels of religious observance common to both Catholic and Protestant Europeans, it also outlines the overwhelming willingness to accept the Christians of different denominations into their families. In Germany, where Luther lived and worked, 98 percent of Protestants and 97 percent of Catholics expressed that they were willing to accept members of the other denomination into their families.

Catholics and Protestants see each other as more similar than different today.

The history of this debate stretches back to Oct. 31, 1517, when Martin Luther nailed his 95 Theses—grievances against the Catholic Church—to the doors of All Saints Church in Wittenberg, Germany, marking the traditional beginning of the Protestant Reformation. Chief among his complaints was an opposition to the Catholic practice of selling indulgences to guarantee the salvation of souls in Purgatory. Luther, and other Protestant thinkers after him, stressed that works (like almsgiving or penance) do not guarantee salvation but only faith in Christ’s sacrifice. Similarly, they taught that the Bible, not traditions handed on over time, is the only source of religious guidance for Christians. In response, the Catholic Church affirmed that faith without good works cannot guarantee salvation and that both Scripture and tradition are authoritative for Christians.

From 1967: A Luther Renaissance in Catholic Thought
William W. MacDonald

In 1999, the Pontifical Council for the Promotion of Christian Unity and the Lutheran World Federation released the Joint Declaration on the Doctrine of Justification. In the document, both communities outline the contemporary understandings of salvation through grace. In the declaration, Lutheran churches and the Catholic Church jointly state, “By grace alone, in faith in Christ’s saving work and not because of any merit on our part, we are accepted by God and receive the Holy Spirit, who renews our hearts while equipping and calling us to good works.” In 2006, the World Methodist Council unanimously voted to adopt the declaration. More recently, the World Council of Reformed Churches (representing Presbyterian, Congregational, Reformed, United, Uniting and Waldensian communities) officially endorsed the declaration; the Anglican Communion is expected to follow suit later this year.

The Pew report comes as both Lutherans and Catholics are marking the 500th anniversary of the Protestant Reformation this fall. Last year Pope Francis visited Sweden to help open the year commemorating the anniversary.

Those committed to achieving Christian unity often worry that high-level gestures and declarations may not be reflected in the lives of ordinary churchgoers. The new research suggests that unity of belief exists at the ground level, too.

This lacks all the theological nuance the topic requires. It's historically problematic, too. Jaroslav Pelikan always said that it is better to say that Luther posted his theses to cover all bases.

Today we can celebrate that the issue of faith and works is not the burning issue that divides Christian Churches as it once did.

While we should focus on the issues that united us rather than divide us, we cannot ignore or minimize the issues that divide the faithful within and between Christian Churches. In this regard, Pope Francis's vision for the Roman Catholic Church from a monarchial Church where all the power and decisions are made in Rome, and where there exists an exaggerated fear to any responsible changes in doctrines and papal encyclicals, to a Church of the People of God where everyone has a real voice. Let's pray that the Gordian Knot of theological impasses no longer divide us.

For me when I think about this, the whole point of the incarnation is to proclaim the good news; that God so loved the world, that we are saved by that fact. God's [our creator in whose image we are made] love for us is revealed in the Incarnation where God ; Jesus, becomes human like us, suffers like us and dies like us. This suffering and death is not our end for we are created to share in God's eternal holy being. Hence God redeems us[ follows through on this, though a break with God has occurred; though the fall.] This redemption has occurred and is true for all humanity whether one knows it or not, or believes in it or not, across all time .
One has to go through Jesus to get to the Father, Jesus reminds us. This does not mean ,CANNOT mean that one must believe and assent with ones mind ,as people cannot help what they happen to believe about God. So something else must be meant. Jesus tells us what that is when he reminds us that not all who say Lord, Lord are pleasing to the Father, and when he tells us that how we treat the least of these is an encounter with Him. So we all, whatever we happen to believe about God or Jesus, whatever our religion or not, have encounters with Jesus and can assent or reject Him. We are free and are called to respond affirmatively to Jesus, in our encounters with the world and its people. So anyone can be saying yes to Jesus regardless of their beliefs. Our works have not redeemed us [ have not made us worthy to partake in the eternal life of God], but our works [moral demands made on us as free beings] align us with God and alignment is required to partake fully in His life. We are created as moral beings called to relate ethically to others and this matters to God in whose image we are made. This is why purgatory makes sense [to me] as it would not make sense if we could be committing grievous sins and injustices against other people, and just because God loves us, and Jesus redeemed us and we believe that, go to heaven. That would make God callous and immoral. But to separate us eternally from God because we were not moral during life ,is also not justice. if there is the possibility of repentance. Nor separating us form God just because we happen to not believe in God or in Jesus Chris. So atoning for the most grievous of sins which is the state of purgatory, is just.
We already are saved JUST BECAUSE God chose to save us, and the saving "mechanism" was the incarnation ; Jesus's birth ,suffering and death;taking on our human condition for us, in solidarity with us. Our works do not save us but our works[ morality] matters to Jesus who calls us to be in solidarity with Him as He is with us and that means with humanity; other human beings. He calls us to be fully human as he was. What we do matters to God as it should to us.
We are saved by Him ;by His incarnation and death. And His resurrection and ascension, and sending the Holy Spirit and leaving us with His church and sacraments, is testament to God's creating us to share in his life eternal.