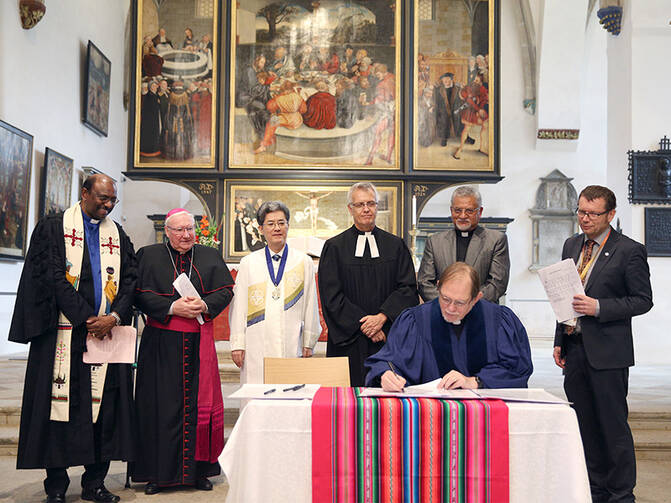 PARIS (RNS) Amid ceremonies this year marking the 500th anniversary of the Reformation, one of Protestantism’s leading branches has officially said it now agrees with the Vatican on the main issue at the root of its split from the Roman Catholic Church half a millennium ago.

The World Communion of Reformed Churches, holding its once-in-seven-years worldwide General Council in Germany, signed a declaration this week endorsing the 1999 Catholic-Lutheran agreement on how Christians might be worthy of salvation in the eyes of God.

The ceremony took place in Wittenberg, where in 1517 Martin Luther unveiled the 95 Theses that launched the Reformation and with it centuries of dispute about whether eternal salvation comes from faith alone — the position of the new Protestant movement — or if it also requires good works on Earth as Catholics argued.

This decision by the WCRC — representing 80 million members of Congregational, Presbyterian, Reformed, United, Uniting and Waldensian churches — marked another step in a gradual but remarkable reconciliation on this issue among Christians who once fought wars and declared each other heretics over just such questions.

The World Communion of Reformed Churches signed a declaration this week endorsing the 1999 Catholic-Lutheran agreement on how Christians might be worthy of salvation in the eyes of God.

The World Methodist Council formally endorsed the Catholic-Lutheran accord, known as the Joint Declaration on the Doctrine of Justification, in 2006. The Anglican Communion is expected to do the same later this year.

The WCRC “now joyfully accepts the invitation to associate” with the Joint Declaration, it said in the document signed at an ecumenical prayer service. “We rejoice together that the historical doctrinal differences on the doctrine of justification no longer divide us.”

The Joint Declaration effectively closes the centuries-old “faith versus works” debate by merging the Lutheran and Catholic views on salvation rather than setting them against each other.

“By grace alone, in faith in Christ’s saving work and not because of any merit on our part,” its key passage said, “we are accepted by God and receive the Holy Spirit, who renews our hearts while equipping us and calling us to good works.”

Historic though it is, the resolution of this theological dispute will not soon lead to changes that people in the pews would notice, such as sharing Communion between Catholics and Protestants, or mutual recognition of each other’s ministers.

“While it brings us closer with the Catholics, Lutherans, Methodists and Anglicans on this particular issue, it does not necessarily immediately move us closer in concrete ways that will be felt in our member churches,” said WCRC spokesman Philip Tanis.

A statement by the Vatican’s Pontifical Council for Promoting Christian Unity said the Wittenberg signing ceremony “must be seen as another important milestone on the journey towards the full visible unity of Christians; not yet the end of the road but a significant stage on the way.”

Pope Francis, who attended an ecumenical ceremony in Sweden last October launching the Lutherans’ yearlong commemoration of the Reformation, sent a message saying he hoped this latest step would “mark a new stage of fellowship and cooperation in the service of justice and peace in our human family.”

The process of reconciliation between the Vatican, representing 1.2 billion Catholics around the world, and the smaller international federations of the leading Protestant denominations has been slow.

Lutheranism and the Reformed movement, based on the writings of the French theologian John Calvin, are two of the main branches of Protestant Christianity. Luther taught that eternal salvation is attained by faith alone, while Calvin and other Reformed thinkers put it in the wider context of God's covenant with man. Lutherans have bishops while most Reformed churches are less hierarchical.

Dialogue among Protestant and Catholic theologians led to a general consensus in the “faith versus works” debate as early as the 1980s, but it took longer for the various church hierarchies to reach official agreement.

Before endorsing the Joint Declaration, the WCRC spent several years considering a specifically Reformed approach to the issue, Setri Nyomi, a former general secretary of the WCRC, told RNS.

"When looking more deeply at it, we noted that it lacked a connection between justification and justice, which has long been one of our priorities, but ways and means to take this up weren't readily at hand," he said.

”Sometimes it just takes time for a discussion to properly mature to reach a level of action on the international ecumenical level."

A second document signed at the prayer service, called the Wittenberg Witness, might bear fruit sooner because it was concluded only between the WCRC and the Lutheran World Federation.

It stated that nothing theological separated the Reformed and Lutheran churches and both sides should do their best to promote unity, from their worldwide institutions right down to the local level.

Among ideas for closer cooperation is for the WCRC and LWF to hold joint general assemblies rather than separate meetings.

In several European countries, including the General Council’s host Germany, Lutheran and Reformed churches are linked in a single national Protestant federation.

“We rejoice that there is no longer any need for our separation,” the document said. “We give thanks for the examples of those Lutheran and Reformed churches that have already declared church communion and now bear common witness together by sharing in worship, witness, and work for the world.”

About 1,000 clerics and laypeople attended the General Council, which was held mostly in the nearby city of Leipzig.

(Tom Heneghan is a correspondent based in Paris)

Notwithstanding the signing of the Joint Declaration, when it comes to the means of justification, there is simply no way to biblically bridge the vast chasm between evangelical and Catholic teaching. In fact, from the Catholic perspective, such partnerships have damning consequences. The pronouncements from Trent have not been reversed or modified. In effect, signing the Joint Dec was akin to agreeing to disagree on the true means of justification, but also agreeing that either means was valid for salvation. In effect, it painted over several important doctrinal differences and blurred the distinctions of two very dissimilar views of justification—that is the doctrine of how a person is made right with God. Righteousness is either imputed or infused, it can't be both. Luther and Calvin, both former Catholics, would vehemently oppose these ecumenical efforts.