Explainer: What the “new” Vatican rules on gluten-free hosts mean 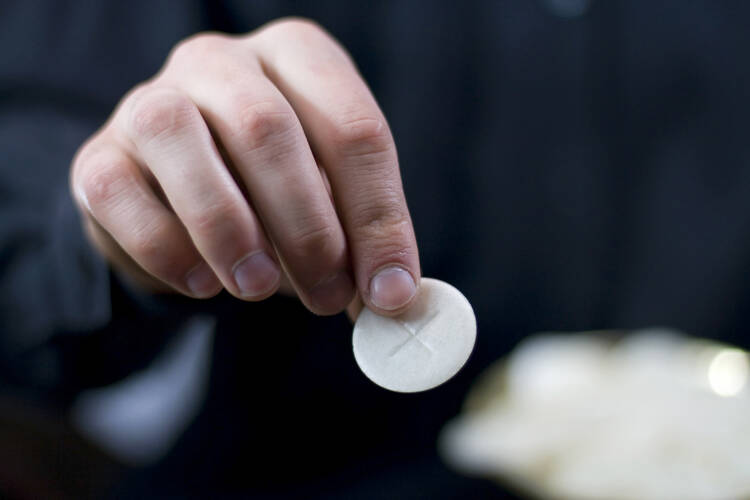 It was one of those rare moments where international media picks up on a liturgical directive in a Vatican letter. Over the weekend headlines read “Gluten-free bread for Holy Communion is Toast, says the Vatican.”“No gluten-free hosts for Eucharist, Vatican says, but GMOs OK,” said another headline. Yet another read, “Catholic Church confirms its opposition to going gluten free.”

As I read the headlines, my mind immediately went to my friend Clare. We almost always go to Mass together at Boston College, where we are both students. Clare, who suffers from celiac disease, is generally offered a gluten-free host.

The stories all seemed to report the same facts: Gluten-free hosts were not allowed to be used for Communion, but low-gluten ones could be. Mustum (grape juice in which the process of fermentation has been suspended) could be used in place of wine if necessary for health reasons. The reports were responding to a letter sent to diocesan bishops from the Congregation for Divine Worship and the Discipline of the Sacraments, headed by Cardinal Robert Sarah. But what exactly qualifies as low-gluten? And would Clare still be able to receive Communion in the form of a host?

Is this guideline on gluten-free hosts new?

No. In 2003, Cardinal Joseph Ratzinger, then head of the Congregation for the Doctrine of the Faith, wrote in a letter that “hosts that are completely gluten-free are invalid matter for the celebration of the Eucharist.”

The 2003 letter also acknowledged that “low-gluten hosts (partially gluten-free) are valid matter, provided they contain a sufficient amount of gluten to obtain the confection of bread without the addition of foreign materials and without the use of procedures that would alter the nature of bread.” This language about gluten-free and low-gluten hosts is exactly the same as that contained in the recent letter. John Baldovin, S.J., a professor of history and liturgical theology at Boston College, wrote in an email, “As far as I can tell this letter is just intended to reiterate a standing policy on ‘gluten-free’ hosts and mustum.”

What’s the deal with the low-gluten host?

To get the Celiac Support Association’s seal of approval, a food must have less than five parts per million of gluten. But the Food and Drug Administration’s guidelines for a gluten-free designation is that the food must contain less than 20 parts per million gluten. The U.S.C.C.B.’s approved providers of low-gluten Communion hosts have less than 20 parts per million of gluten. So while the church considers “low-gluten” hosts to have enough gluten to be “valid matter,” the F.D.A. says the hosts are low enough in gluten to be considered gluten-free. Thus, low-gluten hosts are probably safe for people with celiac disease, but those with high sensitivity should consult their doctors.

The church draws this distinction between low-gluten and gluten-free hosts because the physical elements of the sacrament are bread and wine—what Jesus used at the Last Supper. In order for a host to be bread, it has to be made from wheat and have some gluten, even if it is a vanishingly small amount.

Another cause for concern for those with high gluten sensitivity is cross-contamination if the low-gluten host is placed alongside regular hosts. To ensure cross-contamination is minimized, a separate container (called a pyx) may be used to keep the low-gluten host separate. Furthermore, anyone concerned with ingesting gluten may always drink solely from the cup, as the church teaches that “under either species of bread or wine, the whole Christ is received.”

Why was a new letter issued?

The new letter from the Congregation for Divine Worship and the Discipline of the Sacraments (i.e., “the Vatican,” as summarized in headlines) does not change any of the existing rules about valid materials for the celebration of Mass. Instead, the letter responds to the new reality of being able to buy eucharistic bread and wine from internet distributors, noting that “until recently it was certain religious communities who took care of baking the bread and making the wine for the celebration of the Eucharist.” With a much wider variety of suppliers, the letter reminds bishops that they should take responsibility for assuring that these norms are followed, rather than having parishes rely on an Amazon product description.

While “Vatican says same rules apply to gluten-free hosts, even on the internet” does not make for a very punchy headline, that is actually what happened with this letter.

Emma Winters is an editorial intern at America.

If “under either species of bread or wine, the whole Christ is received” and one receives under the species of wine only--and hence the whole Christ, then how exactly is the material of the bread (i.e., gluten) necessary for the reception of the sacrament? It's superfluous at best, and completely arbitrary to require it at worst.

This seems so silly to my limited brain capacity. I wonder If Jesus agrees? Maybe we need to come to world agreement on the proper chemical balance of altar wine? I don't mean to be disrespectful in my post, but really - do you think this is important? These are symbols. My prayers are with Jesus Christ regardless of the bread recipe.

Someone posted "they are just symbols" when referring the host. No, they are the body, blood, soul, and divinity of Christ Jesus.

Sorry but it is an explanation that makes no sense and smacks of the hair splitting legalism that Jesus criticized. It is hard to believe that he would have cared what the bread was made of as long as everyone had access to the food.

It sure doesn't sound that way, Emma. Did (does) Jesus really care? He spent his life curing people, why would he want to subject seriously ill folk to gluten? We are back to counting dancing angels again.

One of the most fascinating things about the continued ban is its anti-capitalist logic:

I agree with Mary Therese Lemanek. This is embarrassing to me as a Catholic. No wonder non-Catholics scorn us. Don't force people with celiac disease to choose between a painful intestinal attack or declining the eucharist. Didn't Pope Francis talk about mercy? There's no mercy in this legalistic nonsense.