Explainer: Why Pope Francis’ comments on women’s ordination are both business as usual and a big deal 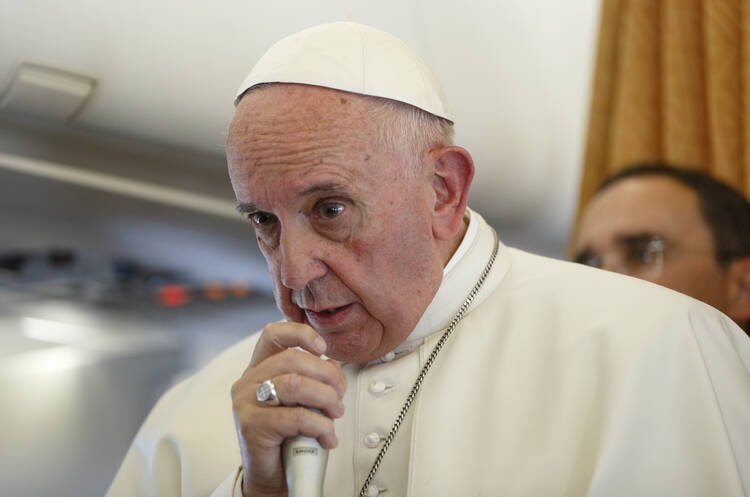 On Tuesday, Pope Francis told the Vatican press corps on the papal plane that the Catholic Church’s ban on women priests would remain intact forever.

At America we use the team communication app Slack, and two days ago it was abuzz with a discussion on how to headline the story accurately. We were running the Catholic News Service story, and had started from their headline, “Catholic Church Never Likely to Ordain Women, Pope Says,” promoting it on social media as “Pope Francis says Catholic Church unlikely to ever ordain women.”

But was it “never likely” or “unlikely to ever?” Or was it just “never?” Was the headline trying to soften a teaching some readers would be hurt by? Or was it adding nuance to something that was absolutely clear?

To recap, the exchange worth paying attention to was:

Pope Francis: “If one carefully reads the declaration of St. John Paul, it goes in that direction, yes.”

On the one hand, he said “never.” End of story, it seems.

On the other hand, he started his answer with a conditional clause, and then said that it “goes in that direction.” Goes in the direction of “never”? What does that mean?

Back to the first hand: Francis’ reference to the declaration of St. John Paul II was to the apostolic letter “Ordinatio Sacerdotalis” which declared, confirming the “constant practice of the church,” that it was impossible to ordain women to the priesthood.

After going back and forth a bit more, we settled on a revised headline: “Pope Francis reaffirms John Paul II’s ban on women priests.”

Our conversation about the headline wasn’t a stylistic one: It actually gets to the core of the debate over the church’s authority to ordain women to the priesthood. Is the church refusing to ordain women, or unable to? The traditional teaching of the church is that it is unable to do so—but St. John Paul II further said that this teaching was to be “definitively held,” intending to close the matter for further discussion or debate. But what has happened, instead, is years of discussion and debate about what “definitively held” means, and whether or not the church is refusing to discuss this further, or unable to.

The full conclusion of “Ordinatio Sacerdotalis,” which Pope Francis referenced as “the declaration of St. John Paul II,” reads:

Although the teaching that priestly ordination is to be reserved to men alone has been preserved by the constant and universal Tradition of the Church and firmly taught by the Magisterium in its more recent documents, at the present time in some places it is nonetheless considered still open to debate, or the Church’s judgment that women are not to be admitted to ordination is considered to have a merely disciplinary force.

Wherefore, in order that all doubt may be removed regarding a matter of great importance, a matter which pertains to the Church’s divine constitution itself, in virtue of my ministry of confirming the brethren (cf. Lk 22:32) I declare that the Church has no authority whatsoever to confer priestly ordination on women and that this judgment is to be definitively held by all the Church’s faithful.

While this was supposed to settle the matter, it actually moved the debate onto a slightly different field. While “Ordinatio Sacerdotalis” was speaking with a high level of authority, it was not the highest—St. John Paul II was not speaking ex cathedra, and an apostolic letter, while weighty, is not at the highest level of teaching authority, such as other papal documents including papal bulls, apostolic constitutions and encyclicals.

And what is the church to make of the phrase “definitively held,” which was not a traditional description of the authority of a teaching? Ladislas Orsy, S.J., a canon lawyer, said in the National Catholic Reporter shortly after the promulgation of “Ordinatio Sacerdotalis”:

As far as we are to understand...definitive is used in understanding that the doctrine involved is not changeable. At the same time, it is not asserted with the same force as it would be in an infallible definition. Since the concept is somewhat new, we don’t have a long-standing tradition to understand it.

The Congregation for the Doctrine of the Faith then responded to concerns like those raised by Father Orsy with a “dubium,” a document intended to respond to doubts and questions.

“To this end, the Congregation for the Doctrine of the Faith, with the approval of the Holy Father, has given an official Reply on the nature of this assent: it is a matter of full definitive assent, that is to say, irrevocable, to a doctrine taught infallibly by the Church.”

Thus, according to the C.D.F. it was indeed “infallible.”

In response to the C.D.F.’s answer, some theologians then questioned how “definitively held” could be considered “infallible” if the pope had not explicitly declared the original document as such. The C.D.F. had, according to some, overreached. Only the pope had the authority to declare infallibility.

So, whether or not Pope Francis meant to say that the church is never or unlikely to ever ordain women to the priesthood, as we were debating about with our headline, may not be easy to answer. And Pope Francis’ in-air press conference yesterday, which are not necessarily known for their clarity in teaching, didn’t advance any new teaching.

By focusing our revised headline on Pope Francis’ reaffirmation of St. John Paul II’s “ban” on women priests, we were trying to stick closer to what Pope Francis was doing: agreeing with St. John Paul II’s teaching about women’s ordination, which said it was impossible. “Never likely,” or “unlikely to ever,” both imply that there is something in the teaching which may be expected to change, even if it almost certainly will not.

The fact that a pope agrees with his predecessors, and continues teaching what they have taught before, is business as usual in the church, and to be expected. This is what it means for the pope and bishops to teach with apostolic authority, in continuity with the tradition and faith of the church as it has been transmitted to us.

At the same time, the fact that Pope Francis is pointing to “Ordinatio Sacerdotalis” and saying that it answers the question about women’s ordination with a “never” is significant news. It adds further weight to the call for this teaching to be “definitively held,” and offers less room for questions about how much authority “definitively held” is supposed to convey.

There’s a reason we were debating about the headline—as a Jesuit ministry, we are faithful to the pope and the magisterium, and that includes reporting accurately what the Vatican and the pope are saying to the faithful.

Yet church teaching is not necessarily something that is fixed and rigid. Within the church’s tradition there have always been a hierarchy of truths, some essential to the faith (think the Creed) and others, such as the meaning of particular passages from scripture, that admit of a range of interpretations. There are also levels of teaching authority, which differ depending on the type of document issued, and who is issuing it. Finally, there is the notion of development of doctrine. As the Second Vatican Council showed, the church’s understanding of its own consistent teaching is not static, as evidenced by changes in relations with other religious communities. After all, the press conference which occasioned these questions was on a flight returning from the pope commemorating the 500th anniversary of the Reformation together with Lutherans, which would have been unimaginable before Vatican II.

Where does the church’s teaching on the ordination of women to the priesthood fall in that hierarchy? According to St. John Paul II, it is important enough as to be closed for discussion. A significant number of Catholics, however, will continue to ask the question. While their questions cannot simply be ordered closed, that does not mean that the church must answer them as they would prefer. The church is not a democracy. Because its authority is apostolic, the faithful cannot disregard the teachings of popes and bishops, even when they find them difficult. Instead of assuming that those who struggle to accept this teaching are disobedient, or that those who readily accept the teaching are happy to perpetuate sexism, we would be better off trying to understand why some people see women’s ordination as something the church cannot do, while others see it as something the church stubbornly refuses to do.