What does subsidiarity mean? A papal explainer 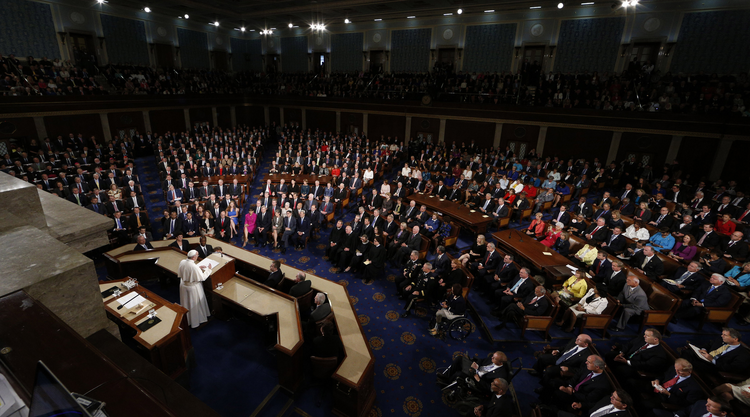 Pope Francis said a lot of words to Congress this morning. He spoke of “cooperation” in a chamber that has seen very little of that in recent years, and quoted a paragraph from the autobiography of a monk. (He also conspicuously didn’t say a lot of words, like “contraceptive mentality” or “intrinsically disordered.”) But there is one word—he said it twice—that could have been unfamiliar to some of his hearers: “subsidiarity.” It therefore may be worth pausing for a moment to consider what that means, and why the world’s most popular autocrat thinks we should spread power our more among ourselves.

First, the context. Near the beginning of his address, the pope said this after quoting Abraham Lincoln on freedom:

Building a future of freedom requires love of the common good and cooperation in a spirit of subsidiarity and solidarity.

And then, later on, and using a parallel construction of "building," while talking about migration:

Building a nation calls us to recognize that we must constantly relate to others, rejecting a mindset of hostility in order to adopt one of reciprocal subsidiarity, in a constant effort to do our best. I am confident that we can do this.

It sort of sounds like he could just be saying “niceness.” Niceness and solidarity! Reciprocal niceness! That would be a predictable platitude for a religious leader who has to more or less please a billion followers. But the meaning is much more specific and interesting, and it represents a critique to both the way Congress governs and the way we Americans expect to be governed, in turn.

The concept of subsidiarity emerged out of Catholic social thought during the late 19th and early 20th centuries, as the church was contending with the social strife of the Industrial Revolution and the manifold evils it wrought for its workers under the banner of progress. On the one hand, Pope Leo XIII’s 1891 encyclical Rerum Novarum stressed the rights of these workers to organize; subsidiarity meant, in that case, that the most vulnerable people in the industrial order are both entitled to and responsible for organizing themselves and making their voices heard.

Some decades later, between the world wars, as certain horrors of class struggle were manifesting themselves across Europe, Pius XI’s encyclical Quadragesimo Anno stressed the need for pause:

the State and every good citizen ought to look to and strive toward this end: that the conflict between the hostile classes be abolished and harmonious cooperation of the Industries and Professions be encouraged and promoted.

Yet, earlier in the document, Pius XI also insisted that harmony is no excuse for the strong to dominate over the weak:

It is a fundamental principle of social philosophy, fixed and unchangeable, that one should not withdraw from individuals and commit to the community what they can accomplish by their own enterprise and industry.

To borrow a term from the Catholic convert and economist E.F. Schumacher, government under subsidiarity should be thought of in terms of “appropriate technology.” Decisions should be made at the level of those who are affected by them, as locally as possible. Politicians from faraway places, for instance, shouldn’t be rigging governments that have no representation in Congress like the District of Colombia and Puerto Rico. And, subsidiarity suggests, businesses shouldn’t be controlled by investors who neither work for nor depend on them.

This is why, as I argued in a recent article for The Nation, the tradition of cooperative enterprise is vital for understanding the sources of Pope Francis’ economic and social hope. Co-ops are structured so as to put their truest stakeholders—whether they be employees, buyers, or independent producers—in charge. And when a cooperative business succeeds, it is those stakeholders who benefit. The rise of participatory budgeting, starting in South America, applies the same logic to the sphere of government.

Francis seemed noticeably uninterested in discussing the kinds of policy proposals Congress continually entertains, which either rely on government largesse or allow big business to run amok over community-scaled enterprise. Under subsidiarity, government must take the weird role of clearing space for people to meet their own needs in their own ways, at whatever level is most appropriate. Michel Bauwens, a Belgian futurist who spoke at the Vatican some years ago, refers to this job description as the “partner state.”

This is a logic that can’t be claimed by either side of the aisle—more likely, in fact, by certain anarchists. Rep. Paul Ryan, while countering criticism that his proposed policies would be disastrous for the poor, tried to justify reducing federal anti-poverty programs as a feat of subsidiarity. But subsidiarity also means, as Pius XI wrote, “harmonious cooperation” between different levels of governance, not simply passing big social problems along to smaller entities that are ill-equipped to handle them. Subsidiarity is not live-and-let-live, as the concept’s libertarian boosters suggest; it demands mutual responsibility.

Mutual responsibility, I think, is the side of subsidiarity that Francis most meant to emphasize today. While conservatives and progressives in the United States have different social visions, and have the right to live their lives accordingly, they also have to cooperate for the good of all. More challenging, still, is the meaning of subsidiarity in the face of migration. The migrant may be a stranger, but she is still human, and still has a right to self-governance. She is not a problem to be solved into nonexistence, or thrown into an unaccountable private prison, but she is a person who deserves to be heard and contended with no less than the Supreme Pontiff.

Not until today did I realize what "Supreme Pontiff" actually translates to in Latin: chief bridge-builder.