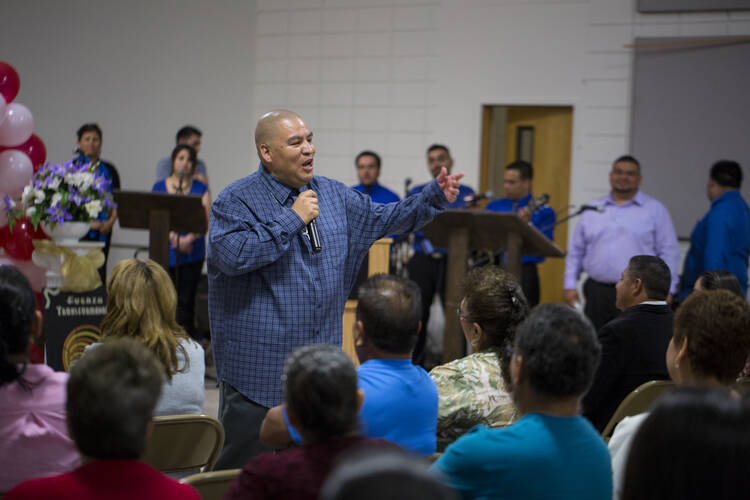 Now Mr. Torres’s relentless years of ministering to gang members, drug addicts and the incarcerated is beginning to be recognized and a national Catholic society is funding the expansion of his program, Fuerza Transformadora, to parishes across the country. The 44-year-old continues to challenge priests in Arkansas and throughout the country with his dedication to live out the Gospel and to the people he brings to church.

“I still call them the ‘invisibles’ because nobody wants to see them,” Mr. Torres said of those he helps. “At first, I heard [churches] don’t want to deal with gang members, alcoholics or drug addicts. But that’s when I told them, you know what, the people you don’t want to see in church, that’s the people I’m going to bring to church.”

Mr. Torres, the associate director of faith formation in the Diocese of Little Rock, Ark., began sharing the Gospel with others after his own faith transformation. Before that, he thought church was only for good people, something he was not.

At age 14, he and his family immigrated to Los Angeles from Mexico City. Just after starting junior high, the teenage Mr. Torres was confronted by a group of people because of the way he looked. He dressed like the rappers he saw on MTV. They thought he dressed like a gang member, potentially a rival gang member. A man on the street accused him repeatedly, before pinning him to the ground, Mr. Torres remembered.

“He got an ice pick from his pocket and he put it on my neck. He told me, ‘You want to do die?’ And I just stayed quiet. I didn’t say anything, so they started laughing and they left.”

Scared, Mr. Torres approached a rival gang about membership and protection. When means of entry included getting jumped by 50 members, he declined and started his own group. The gang—“Mexicans Causing Panic”—grew slowly until one of its members killed the man who had threatened Mr. Torres with the icepick. The gang’s membership jumped from single digits to over 80 people. He was selling marijuana and cocaine, but his life began to unravel, he said.

His parents left Los Angeles for Arkansas in 1995, hoping the move would protect Mr. Torres, but the plan backfired. There were no gangs in the state, he said, so he started one here. He was arrested in 2000 for fighting a police officer in Springdale, Ark.

His mother came to get him from jail. Seeing her tears reduced Mr. Torres to his lowest point. He had to face the pain he was inflicting on others.

“My parents, they were always [there] for me,” he said. “When I got home, I went into my room and that’s when I felt like I wanted to go back to California and get shot, get killed, because I didn’t want to live anymore.”

But something sparked his memory. A stranger on the street had once told him to talk to Jesus in times of struggle. Mr. Torres did not believe the man at the time, but decided to give prayer a chance.

He began talking to Jesus.

The people you don’t want to see in church, that’s the people I’m going to bring to church.

He went to Mass the next morning and asked the priest how he could learn more about Jesus. He was encouraged to join the young adult group but first had to attend his court hearing. He faced six years behind bars. He pled guilty to the assault of the officer. When the sentencing came, Mr. Torres closed his eyes and began talking to Jesus, again, he said.

He had to complete community service, but he saw the judge’s mercy as a sign. Mr. Torres began working with drug addicts, gang members, prison inmates and people experiencing homelessness in 2003. The Fuerza Transformadora meetings were filled with Bible readings and his own testimony, which the listeners enjoyed, but the local churches did not. The churches would not let the groups meet in their spaces, so Fuerza Transformadora groups met in parking lots, parks and, for awhile, a police station.

The community was upset about the new faces at church. They complained to church leaders, he said, saying the newcomers dressed like gang members, that they were liars plotting something evil against the church or that they were selling drugs to the youth.

But Mr. Torres kept quiet and kept pushing, driven by the message of Matthew 25: “Whatever you did for one of the least of these brothers and sisters of mine, you did for me.”

“I just wanted to pay Jesus back for what he did for me,” he said.

Priests in Arkansas began warming to the idea of his work. Bishop Anthony Basil Taylor of the Diocese of Little Rock brought Fuerza Transformadora to the attention of Catholic Extension, a Chicago-based evangelization effort that provides support and services to 90 U.S. dioceses. At the same time, a gathering of bishops discussed needing to do more outreach work to at-risk populations. The group was bolstered by the findings of a joint study by Boston College and Georgetown University on a quarter of all U.S. parishes, which found that just four percent of parishes have outreach programs for Hispanic youth in gangs.

I just wanted to pay Jesus back for what he did for me.

When members of Catholic Extension visited Fuerza Transformadora, about 500 people were active in the program “with amazing success,” said Joe Boland, vice president of mission.

“The stories are just absolutely incredible,” he said. “[Fuerza Transformadora] combines Catholic faith and Catholic spirituality with the tools of Narcotics Anonymous or Alcoholics Anonymous.… It’s a faith group and it’s a spiritual group to help people get through some of the most difficult times in their life.”

“The whole model, its success, is contingent on getting local leaders in place who can do this work,” he said.

Jorge “Fish” Perez leads the Fresno chapter in Hanford, Calif. The 22-year-old spent his teenage years involved with gangs. He was a smart kid, he said, but lost care for his life when his father left the family in 2007.

Getting kicked out of high school was a turning point for Mr. Perez. Going to Immaculate Heart of Mary and its youth group showed him another side of life. Mr. Perez earned his high school diploma in 2012. When the diocese of Fresno was looking for a church and leader for its Fuerza Transformadora chapter, Mr. Perez volunteered.

“This program is something that every church should have,” he said, noting he is most drawn to the street ministry work. He interacts with gang members whose entire lives were defined by violence or criminal activity. “I could of been that, but I’m not, and I thank God for that.”

Instead, Mr. Perez wants to become a prison chaplain. He credits Mr. Torres for inspiring him to bring God to people on the social margins. Mr. Torres’s vision for the church predated the mission Pope Francis would later articulate, Mr. Boland said.

“One of the greatest pieces of this story is Jaime himself and his witness,” Mr. Boland said. “His work, in the spirit of Pope Francis’ spirit of the church, is reaching out to those peripheries and those people who otherwise would not easily find themselves in a church.”