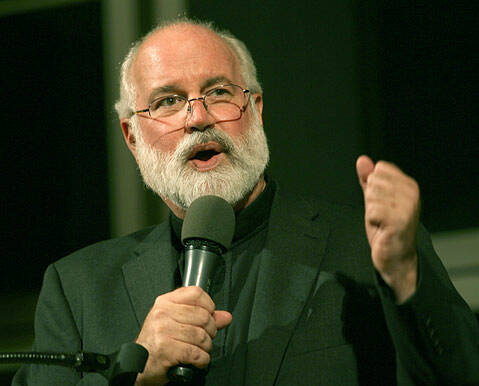 Father Greg Boyle, S.J., is an American Jesuit priest who works with Los Angeles street gangs as the founding director of Homeboy Industries in California. Before founding Homeboy Industries as a non-profit ministry to his neighborhood’s predominantly Hispanic gang members in 2001, Father Boyle was a pastor of Mission Dolores church in 1986-1992. Homeboy Industries got its start when he founded Homeboy Bakery in 1992, following the L.A. race riots, as a way of getting gang members off the streets. He previously taught at Loyola High School and worked with Christian Base Communities in Cochabamba, Bolivia. He also spent time as Chaplain of the Islas Marias Penal Colony in Mexico and at Folsom Prison in the U.S. He is the author of Tattoos on the Heart and is also a public speaker who has been honored by numerous organizations for his work.

On Aug. 17, I interviewed Father Boyle by email about his work on behalf of gang members.

You’ve been working with L.A. gang members for more than three decades now. How has the work changed or evolved for you over the years?

In the early days, when the work was focused on the eight gangs—at war with each other in my parish—I worked with "gangs," not just “gang members.” I would facilitate truces and cease-fires and peace treaties. It made sense to do this then. Whereas, I don’t regret doing it, I’d never do it again. If you work with gangs, you supply oxygen to the gangs. This is not good. Plus, you romanticize gangs when you do this, as if gangs were the Middle East or Northern Ireland. They’re not. Now, at Homeboy Industries, we say, “we don’t work with gangs, we work with gang members.”

How has your Catholic faith been affected by working with gang members?

In 30 years, I have had to bury 194 young people killed because of gang violence. Kids I loved—killed by kids I love. People always ask me if such a thing has led me to question my faith. I’m always asked this. Not entirely sure why. These deaths and the grief surrounding them have shaped my faith, not shaken it. God stands with us and God’s heart is broken by the very thing that breaks our hearts. I suppose that if death were the worst thing that happened to us, perhaps we’d be toppled. Worse than death, is not knowing the truth of who we are: exactly what God had in mind when God made us. My faith is indeed stronger because I know the thousands of gang members who have blessed my life.

Where do you find God most clearly in your ministry?

We are not invited to rescue, fix or save people. The heart of ministry is to receive people and then enter into the exquisite mutuality God intends for us all. Saving lives is for the Coast Guard. An earnest fellow, working with gang members, asked me once: “How do you reach them?” I said, “For starters, stop trying to reach them. Can YOU be reached by them?” This is the essence of a ministry that empowers by listening, receiving and welcoming. My life is saved everyday by contact with folks who are at the margins. And the day won’t ever come when I am more noble, have more courage or am closer to God than these people.

What’s the greatest consolation in your ministry?

What’s the greatest desolation in your ministry?

How do you overcome the hatred that gang members feel for their enemies?

You’ve often said that “nothing stops a bullet like a job.” Why are jobs so important for keeping young Catholics off the streets and active in their faith?

God’s hope is that “my joy is in you, and your joy complete.” That’s God’s wish for everybody (not just Catholics). But folks have to feed their kids and pay their rent. And people of faith must not rest until all our brothers and sisters are able to do just that.

Your job referral ministry at Homeboy Industries involves tattoo removal and helping people overcome drug addictions. How do tattoos and drugs impact the lives of young Latinos in your Los Angeles neighborhood?

Tattoos are an impediment to future employment. Most mistakes can’t get erased. But tattoos can. Gang members use drugs and alcohol to self-medicate rather than confront their past and darkness. Homeboy Industries help them move to transformation, healing and attachment repair, without the use of a controlled substance.

One of the most powerful obstacles to getting off the streets is that many people with deep wounds in their lives turn to drugs as a way of numbing their feelings, blinding themselves to the bleak reality of their situation. In your own ministry, how do you help addicts overcome their physical dependency on drugs and help them find better ways to cope with life’s sufferings?

Love is the answer. Community is the location. Tenderness is the methodology.

With marijuana now legal in Colorado, some Catholics are concerned about the drug’s effect on drivers, which is similar to alcohol but more difficult to measure in terms of setting a legal limit. As someone with first-hand experience of working with drug addicts, how do you feel about efforts to legalize pot and other recreational drugs?

I suppose it would be helpful to treat marijuana like alcohol.

Violence is another kind of addiction that often blinds people to love of God and neighbor. What perspective does the Catholic faith give people in confronting violence?

The question to ask is: What language is this behavior speaking? For violence is not a behavior, it’s a language. The language of the despondent, the traumatized and the mentally ill.

What can Catholics and others of good will do to help the homeless, gang members and other marginalized members of society discover God’s love in their lives?

Show up and learn from them.

To be able to financially sustain what we do.

Sean Salai, S.J., is a regular contributor at America.

Show Comments (
11
)
Comments are automatically closed two weeks after an article's initial publication. See our comments policy for more.
Beth Cioffoletti
8 years 5 months ago
Wow. Just wow.
Anthony AHRENS
8 years 5 months ago
Thanks so much for this beautiful interview! And thanks to Fr. Greg not just for his work but for his way of conveying his work.
Reyanna Rice
8 years 5 months ago
Father Boyle sounds a lot like Francis and Francis sounds a lot like Father Boyle. That Jesuit DNA runs true across the whole of the "Jesuit species"! Darned hardy stuff and thank God.
Mary Nolan
8 years 5 months ago
How wonderful to find the interview with Fr. Greg Boyle. The questions were pretty much expected and ordinary. The answers so worth the read...insightful, challenging, grace filled! Thank you.
JR Cosgrove
8 years 5 months ago
I think Fr. Boyle has made an appeal. How can I or others donate money to his efforts. Is donating to Homeboy the best way?
Fredericka Wall
8 years 5 months ago
If you have not already read Fr. Boyle's book about his work, I encourage you to buy it. "Tattoos on the Heart". It immediately became one of my all-time favorite books.
Andrew Bouvier-Brown
8 years 5 months ago
I love America and am always pleased with the editorial choices. This is a rare instance where I have a bit of constructively intended criticism. Father Greg says (and has said similar things many times before): "We are not invited to rescue, fix or save people. The heart of ministry is to receive people and then…enter into the exquisite mutuality God intends for us all. Saving lives is for the Coast Guard." And yet the title for this interview, presumably given by the editorial staff? "SAVING Gang Members From the Street." Kind of misses the point, doesn't it?
Egberto Bermudez
8 years 5 months ago
Comment Congratulations! Sean, keep up the good work. This is another great interview. Pope Francis began his pontificate by asking us to pray for him, may I suggest that you interview Fr. James Kubicki, S.J., the Director of the Apostleship of Prayer and also, Fr. Robert Spitzer,S.J., the President of the Magis Center of Reason and Faith. These too are wonderful and essential ministries today.
Anne Schleicher
8 years 5 months ago
I agree with the reader who suggested reading Father Boyle's book, TATTOOS ON THE HEART. It was a profound experience for me.
JR Cosgrove
8 years 5 months ago
If anyone wants to buy Fr. Boyle's book on his experiences, here is the Amazon web page http://www.amazon.com/Tattoos-Heart-Power-Boundless-Compassion/dp/B004RB8CTO/ref=tmm_aud_swatch_0?_encoding=UTF8&sr=1-1&qid=1408838712 It has 533 reviews, 483 are 5 star.
JR Cosgrove
8 years 5 months ago
I have been listening to Fr. Boyle's book the last few days. He narrates the audio version. Some amazing and heart wrenching stories about these kids lives. Fr. Boyle has cancer and I hope it is in remission because there is an almost endless amount of work to do with these kids and their families. There are lots of way to help his work. One is to just donate to Homeboy industries or you can buy t-shirts or tote bags etc. Or at a minimum buy the book or listen to it as I have been doing.