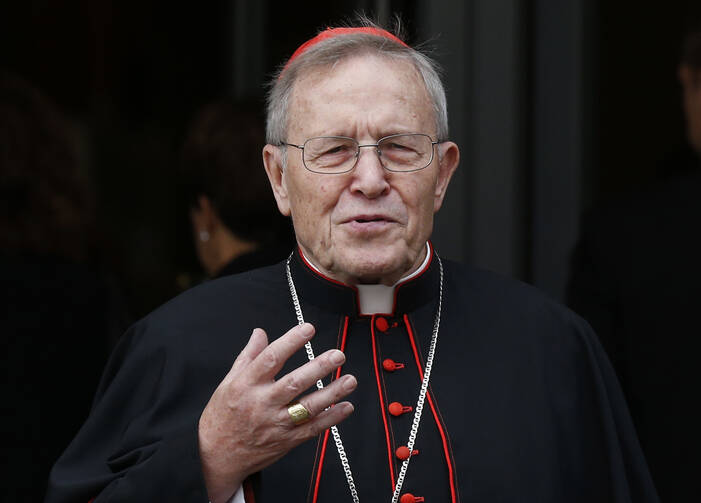 Cardinal Walter Kasper, an accomplished German theologian who has written at least 15 books in ecclesiology and Christology, has become known in recent years as the “pope’s theologian.” His latest book, "The Catholic Church," sheds light on why Pope Francis has relied on his theological contributions and calls upon him with confidence. This magnum opus in the area of ecclesiology consistently shows great respect for tradition and orthodox theology while also constantly seeking renewal and freshness and a dynamic, living relationship between doctrine and pastoral practice.

“There can be no pastoral orientation without a doctrinal basis,” Kasper writes. “Likewise, doctrine is no dead formula carried about like a monstrance. Rather, doctrine must be pastorally translated into life and proclamation.”

This is exactly what guided Kasper through the contentious debates at the meetings of the Synod of Bishops on the family, where several vocal bishops made it clear they believe doctrine is static and unchanging and can be clearly and deductively applied to pastoral situations. For these bishops, expressions like “objectively disordered” (referring to gay persons) and “living in sin” (referring to cohabitating unmarried persons) easily roll off the tongue. Kasper, meanwhile, without arguing for a radical change in doctrine, draws from more central parts of the tradition, like God’s mercy, to bring fresh perspective to challenging pastoral situations.

Kasper begins The Catholic Church in unique fashion, with a personal narrative about his “journey in and with the Church,” and he later devotes substantial portions of his text to theological methods, the history of salvation, images of the church, the nature of the church and its four fundamental marks (one, holy, catholic and apostolic), contemporary developments in Catholic theology and the central tasks of the church to be both missionary and engaged in dialogue.

In a section on women in the church, Kasper begins with a mea culpa, admitting the institution’s “misogynist tendencies and discrimination against women.” Yet in typical Kasper fashion, he balances the criticism with an account of the tremendous strides the Catholic Church has made, including Pope John XXIII’s affirmation of the women’s liberation movement as a “sign of a time” and the Second Vatican Council’s blunt rejection of discrimination based on sex. Kasper concludes the section with great hope for the future of women in the church, suggesting “we are just at the beginning of a development” that will be led by “charismatic and prophetic women.”

Among these charismatic and prophetic women are the contributors to the accessible and substantive essays in "Catholic Women Speak." While the prominence of Cardinal Kasper at the recent synod is well documented, surely just as notable was the underrepresentation of women—even though they are at the center of family life in every part of the world.

Tina Beattie, a professor of Catholic studies at the University of Roehampton, London, wanted to challenge this exclusion. In a recent article in Commonweal (3/29), she tells the story of the Catholic Women Speak Network and the origins of this book. She met with an official at the Pontifical Council for Culture and asked how women might have a greater presence at the synod. The person said: Write a book! Within six months, 300 copies of this book of essays were available on a table in the synod hall, and the bishops picked up nearly every copy.

The essays were collected with the bishops in mind, but this book is for all Catholics. Selections are short and accessible—none more than four pages—so that bishops could read an essay during a coffee break. The women share stories of joy, pain, faith and hope. Pope Francis has repeatedly said that he prefers a church that is “bruised, hurting and dirty because it has been out on the streets, rather than a church that is unhealthy from being confined and from clinging to its own security.” These contributors have not been afraid to get dirty in the mud of everyday life.

Like the bishops who attended the synod, this book represents the global diversity of the Catholic Church today. The 44 contributors represent 16 countries and six continents. Each contributor is a practicing Catholic, writes on an issue relevant to the synod and expresses the struggle of Catholic women to live with fidelity and conscience. Some are well-known theologians, like Elizabeth A. Johnson, S.S.J., Lisa Sowle Cahill and Margaret A. Farley, R.S.M. Others are active in parish ministries, social work and other professional fields. The women represent different generations: grandmothers and young women, married and single, religious and lay. The book will introduce you to extraordinary Catholic women whom you do not know but should. Astrid Lobo Gajiwala of Mumbai, for example, not only established India’s first tissue bank, but she has also served as a consultant for the Indian Catholic bishops and was instrumental in helping draft the gender policy of the Catholic Church in India.

The essays are grouped under four major themes. “Traditions and Transformations” reviews some of the dramatic social changes for women in society and the church and mainly highlights the positive role of the church in providing health care and education to so many women and girls. These essays offer theologically rich and sophisticated treatments of topics like “gender theory” (rather than the general condemnation that topic typically receives). Janet Martin Soskice asks whether we can recognize sexual difference while not taking it to an extreme that calls into question whether women can say, as did the Second Vatican Council’s “Pastoral Constitution on the Church in the Modern World,” that Christ “became truly one of us, like us in everything but sin.”

The second section, “Marriage, Families, and Relationships,” is the longest, comprising about half the book. It most directly addresses the questions facing the synod, with special attention to the experiences of women and girls within families—often painful but not without hope. These contributors explore the gulf that can exist between ideals and reality, and how family is talked about in the church versus how it is experienced and lived by most Catholics. They also ask how the church can better account for this reality, meeting people where they are and providing the pastoral accompaniment for which Pope Francis has called. Painful and controversial topics—divorce and remarriage, contraception, same-sex relationships—are not avoided. People share personally and honestly and with fidelity and nuance.

The third section, “Poverty, Exclusion, and Marginalization,” is certainly close to Pope Francis’ heart, for it raises voices from the margins in Argentina, India, Africa and the Philippines. The writers emphasize that a poor church for the poor must take serious account of the effect of poverty on women and girls. The fourth section, “Institutions and Structures,” is the briefest but no less important. It is not about organization in itself, but how “the absence of women limits the capacity of the institutional church in its mission of evangelization and pastoral care.” The writers in this section call for the greater participation of women in future synods, for greater inclusion of biblical stories of women in the Lectionary, and for the voices of women to be heard from the pulpit. In the final essay, Catherine Cavanagh takes up the issue of ordination in a refreshing and respectful way: she examines the possible consequences for families that only men can be priests, preach and make final decisions.

A broad range of personal testimonies on controversial topics was largely missing from the synod, and this is where Catholic Women Speak makes its most important contribution. The bishops at the synod talked about people who are divorced and remarried or gay, but too often the bishops did not talk with the people themselves and listen to them. These essays bring the bishops one step closer to the pastoral encounter that Pope Francis repeatedly emphasizes. Yet the relevance of the book extends beyond bishops. It is an aid for any person who wants to explore the experiences, joys and struggles of women in the church.

Cardinal Kasper’s tome, meanwhile, is better suited for professors and graduate students of theology. It is dense, long and quite expensive. If, however, you are looking for an in-depth treatment of ecclesiology that puts the Catholic theological tradition in conversation with today’s pastoral challenges, then it fits the bill.

This article also appeared in print, under the headline “Bringing Doctrine to Life,” in the November 28, 2016, issue.

More: Theology / Synod on the Family / Women in the Church / Social Justice

Luke Hansen, S.J., a former associate editor of America, is a student at the Jesuit School of Theology of Santa Clara University in Berkeley, Calif.; Twitter: @lukehansensj.