How does a book reading turn into an attempted murder? The threat against Salman Rushdie has been decades in the making 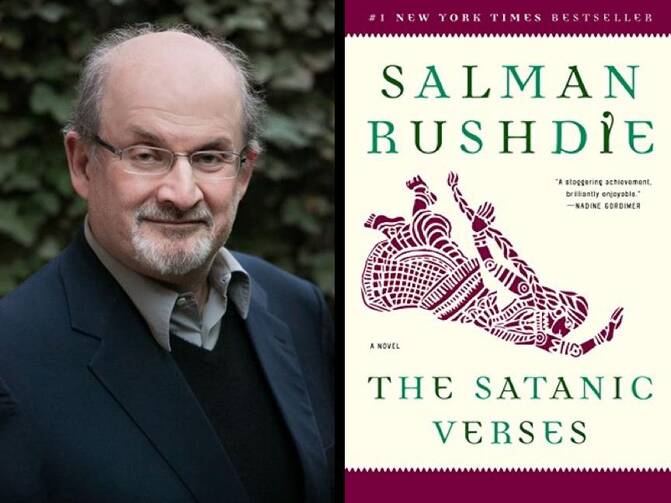 The attack on Salman Rushdie on Friday in Chautauqua, N.Y., was a stark reminder of how quickly our illusions of safety and order can be shattered. How does a book reading turn into an attempted murder? It was also a reminder that the author has lived under a death sentence for—count ‘em—33 years. His condemnation to death by the ruler of Iran had become a sometimes-remembered question of historical intolerance and an interesting footnote in the relationship between Islam and the West. But while it appears Rushdie will survive the assault, it is clear the threat against him has never really gone away.

Rushdie’s novel The Satanic Verses was published in 1988. The next year, Iran’s Ayatollah Khomeini issued a fatwa against Rushdie, declaring that he, “along with all the editors and publishers aware of its contents, are condemned to death” for what was seen as the book’s blasphemy against Allah and ridicule of Islam (Khomeini, according to his own son, never actually read the book). At the time, Rushdie and the British government took the threat quite seriously, in part because the government of Iran backed it up with a $6 million bounty on Rushdie’s head. The British government severed diplomatic relations with Iran over the incident.

The controversy of course made The Satanic Verses a runaway best-seller—“the best known and least read book of the twentieth century,” wrote one America author—but Rushdie spent nine long years in hiding before resuming a moderately normal life. Over the past two decades he has returned to publishing novels regularly (eight since The Satanic Verses), along with many other works, including a memoir of his experience of living under the fatwa, 2012’s Joseph Anton (his alias during those years).

"Christians discover that Muslims do not share many of the values of the pluralistic West and Muslims discover that Western religious sensitivities are quite different from those of Islam."

The Satanic Verses “appears destined to be one of the most controversial and certainly the most publicized novels in history,” wrote the Rev. Elias D. Mallon in America in April 1989, a month after the fatwa was announced. “The controversy surrounding the novel is a paradigm of the difficulties that have existed over the centuries between Islam and the West. What was once a conflict between ‘Christendom’ and Islam has now shifted to a conflict between Islam and pluralistic democracies.” A scholar engaged in Christian-Muslim dialogue, Father Mallon found it “a classic example of two world views not understanding each other—and doing it with passion and conviction.”

Part of the blame, Mallon wrote, could be laid at the feet of well-meaning attempts to paper over differences between the two faiths in pursuit of an endless string of areas of agreement. It comes as a rough shock when “Christians discover that Muslims do not share many of the values of the pluralistic West and Muslims discover that Western religious sensitivities are quite different from those of Islam.” Nor should Westerners, he warned, be all that quick to see Rushdie as a babe in the woods in the controversy: “He was born a Muslim and grew up familiar with Islam. Islam’s intense sensitivity toward its central personages and symbols cannot have been something of which Rushdie was unaware,” Mallon wrote. “None of this justifies death threats, book burnings and calls for censorship. It does, however, caution against looking upon Rushdie as a totally innocent victim, ignorant of the storm that he was about to unleash.”

Mallon suggested that the controversy offered a teachable lesson for everyone. For Christians, it could be a challenge to understand Islam and Muslims better: “The fact that Christians are almost totally unfamiliar with so many of the central symbols and most important personalities of Islam is a sign that there is need for education.” For Muslims, it could be a challenge to recognize that “Westerners, who are as profoundly committed to their faith as are Muslims, experience their faith as most secure and most free to practice its beliefs in a society where pluralism is strictly safeguarded” and most expressions of speech are uncensored.

Salman Rushdie: "America had left reality behind and entered the comic-book universe.”

It has been more than three decades since the fatwa was issued, and our political and cultural categories have changed dramatically since 1989. “The Anglo-American world did not yet see militant Islam as its primary enemy. Our bête noire in those days was the dreaded, though crumbling, ‘evil empire’—the Soviet Union,” I wrote in a column for America in 2009. The United States had some strange bedfellows at the time, too: “Among our unofficial allies in those days were Saddam Hussein, Iran’s implacable enemy, and Osama bin Laden, who was waging jihad against Soviet aggression in Afghanistan with American military aid.”

Rushdie is now a resident of New York City, and his latest novel, Quichotte, 2019, is a Don Quixote-inspired tale of an aging Indian-American traveling across the United States in search of his own Dulcinea. It’s not Rushdie’s first novel set in the United States; Grimus, published in 1975, followed the exploits of an Indigenous person in Arizona who achieves immortality (what can I say, magical realism was a hell of a tester).

In 2017, he published The Golden House. According to reviewer Randy Boyagoda, the novel featured “two of the defining concerns of Rushdie’s career—his interest (often but not always polemical) in the abiding powers of belief and religion in the modern era, and his interest (often but not always affectionate) in the oversized influence and tumultuous nature of the United States.” In his Gatsby-esque novel about the contemporary United States, Rushdie focuses on the personal (in the individual lives of his characters) and the political (in his treatment of the rise of Donald Trump) while keeping his sharp wit.

President Trump “was, after all, a scary clown,” Rushdie writes, both because it was so hard to take him seriously and yet impossible to deny his political success: “America had left reality behind and entered the comic-book universe.”

Rushdie is at his best, Boyagoda observes, when he is “drawing us toward higher concerns, as when he balances the novel’s early celebrations of the self-invention made possible by coming to America with more wistful reflections about the irreducible continuities of our lives.”

Ours “is not an age of heroes,” says Rushdie in The Golden House. Instead, Boyagoda writes, “it is an age of division and violence, one in which the question of the value of human life itself emerges as the question that matters most, both in national life and family life.”

Ours “is not an age of heroes,” says Rushdie in The Golden House.

Our poetry selection for this week is “Trigger Point,” by Jeff William Acosta. Readers can view all of America’s published poems here.