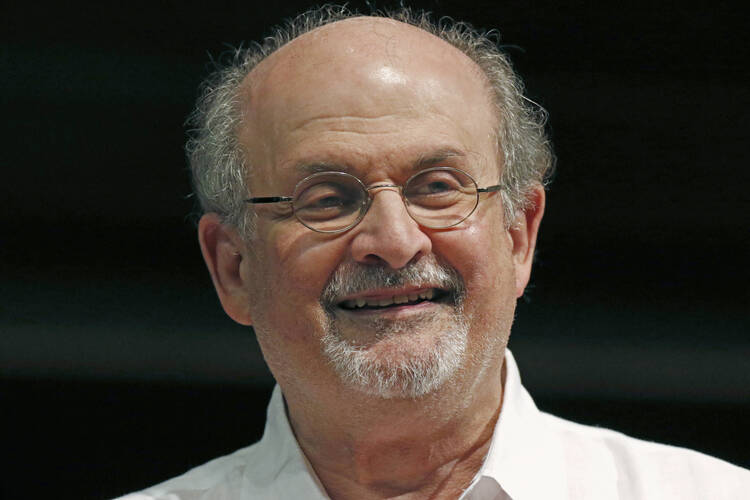 Two decades ago this week, the literary world was abuzz with the news of history’s Least Funny Valentine: on Feb. 14, 1989, Iran’s supreme religious leader, the Ayatollah Ruhollah Khomeini, issued a fatwa calling for the death of the author Salman Rushdie. In the judgment of Khomeini and his religious cohort, Rushdie had in his novel The Satanic Verses blasphemed against Muhammad the Prophet, and Allah besides.

It was a different time, of course, and the Anglo-American world did not yet see militant Islam as its primary enemy. Our bête noire in those days was the dreaded, though crumbling, “evil empire”—the Soviet Union. Nevertheless, portents of the future were present: months after the publication of The Satanic Verses, which opened with the destruction by terrorists of an airliner over Britain, Pan Am Flight 103 was destroyed over Scotland by Libyan intelligence agents, with a loss of 270 lives. Earlier that year, a U.S. warship had shot down an Iranian airliner over the Persian Gulf, killing 290 people; the crew mistook it for one of the American-made F-14 warplanes sold to Iran in the days of the Shah. Among our unofficial allies in those days were Saddam Hussein, Iran’s implacable enemy, and Osama bin Laden, who was waging jihad against Soviet aggression in Afghanistan with American military aid.

Rushdie rightly took the threat against his life seriously and went into hiding; over the next few years, numerous people associated with the publication of his novel were attacked. Iran’s theocrats and their contemporary heirs have never truly renounced the fatwa. To this day Rushdie remains under threat of assassination.

The tragic story is not without its ironies—Rushdie is hardly an example of Western imperialism. The Satanic Verses is in fact an attempt to express the discontent of citizens of former British colonies against that imperial culture. A second irony is that Khomeini’s fatwa probably gave the novel far greater prominence than it deserved. It would never have received so much attention—almost like that given Midnight’s Children, Rushdie’s masterpiece novel—without the ensuing media coverage.

Of course, as Ingrid D. Rowland’s new book on the trial and execution of the 16th-century Italian philosopher Giordano Bruno (Giordano Bruno: Philosopher/Heretic, reviewed in these pages on Jan. 19) reminds us, the marriage of theologians and secular authority has not always been a felicitous one in Western history, either. After Bruno was found guilty of obstinate heresy in Rome, his books were ordered burned on the steps of St. Peter’s in 1600. Bruno himself was burned at the stake on Feb. 17 that same year. It was Ash Wednesday. Among Bruno’s inquisitors was St. Robert Bellarmine, S.J. Rowland notes that Bruno’s execution haunted Bellarmine for the rest of his life, and as a result Bellarmine took a radically different approach to the confrontation with Galileo Galilei, trying repeatedly to avoid a situation that might lead to a similar fate for Galileo.

In 2000, almost exactly a month after the 400th anniversary of Bruno’s execution, Pope John Paul II issued a historic apology for “the errors of Christians in every age,” including “methods of coercion employed in the Inquisition.”

One hopes Salman Rushie will not have to wait four centuries for an apology for the threat against his life and livelihood. May we also hope that all faiths can forever put behind them the use of censorship or violence against writers in the defense of religion. We do more to honor the strength of our faith when we resist such methods.